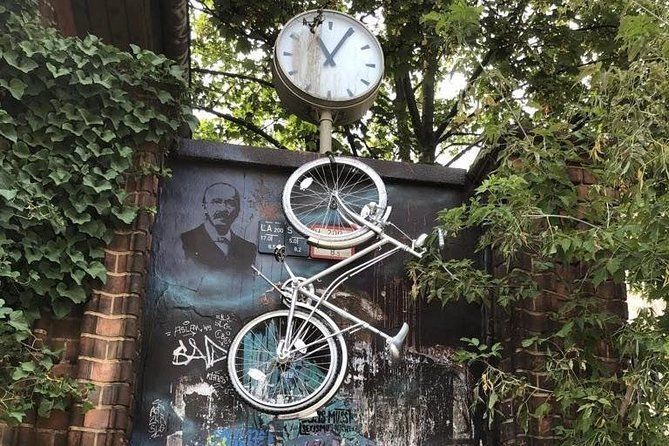 Learn about extraordinary people with extraordinary stories. Of art and architecture, cinema and squats. War and peace. East and West. A deeper look below the surface of Berlin.

Shine a light into the shadows of history and why it effects the present on the Real Berlin experience. Visit districts that have changed beyond recognition over the decades, through processes as diverse as squatting, revolution and gentrification. Experience the never ending, ever changing chaos. We tell you the stories you don't know, of pioneers of cinema and those who refused to bow to fascism. We will make you fall in love.

This small-group tour limited to 20 people makes for a more laid-back, intimate experience.

Learn about extraordinary people with extraordinary stories. Of art and architecture, cinema and squats. War and peace. East and West. A deeper look below the surface of Berlin.

Shine a light into the shadows of history and why it effects the present on the Real Berlin experience. Visit districts that have changed beyond recognition over the decades, through processes as diverse as squatting, revolution and gentrification. Experience the never ending, ever changing chaos. We tell you the stories you don't know, of pioneers of cinema and those who refused to bow to fascism. We will make you fall in love.

This small-group tour limited to 20 people makes for a more laid-back, intimate experience.

Begin your exploration of the real Berlin by meeting your guide at noon in central Berlin. During your comprehensive 4.5-hour walking tour, you'll go off the beaten path and see aspects of Berlin most tourists miss. Because of the more relaxed pace of a small-group tour, you'll have more opportunities to capture photos and ask your knowledgeable local guide questions.

As you wander around town, your guide will point out sites related to various countercultural movements, including the student protest movement of the 1960s, the rise and fall of the Baader-Meinhof gang in the 1970s and the punk movement and May 1 riots of the 1980s. See mind-blowing street art, graffiti and murals all over town. Learn about the electronic dance musical festival called the Love Parade and the hip-hop, reggae and rasta scene of Yaam Beach.

By the time your in-depth cultural tour of Berlin concludes at Yaam Beach, you'll know much more about the history, neighborhoods and alternative scenes of this fascinating city.

Confirmation will be received at time of booking.
AB public transport ticket recommended for tour.
This tour/activity will have a maximum of 20 travelers

Fantastic way to see and explore the not so touristy areas of Berlin and understand the history of the previously divided city.

T he guide was excellent.She gave us very detailed information about the three districts we visited.What I like most is that we were taken to places that the ordinary tourist is not able to discover bythemselves. I highly recommend this tour to eveyone who is interested in getting the feeling of how different cultures interect in Berlin.

This was an excellent tour. The guide was fantastic and we learned things about street art we never even knew we didn't know.

I loved this tour it really took you off the beaten path and I saw parts of Berlin that you would not see on your own.

I love this tour and have met people in this tour as well. The tour guide is very knowledgeable about the history of arts they don't call it graffiti and berlin. And he is not even from Germany. Highly recommended.

It was an amazing tour with Column the guide.He was excellent and we learned a lot and saw places that we couldnt have seen alone.We recommend this tour,

Can't recommend this tour highly enough. Our guide Pete was extremely knowledgable about Berlin's wonderful, complicated history and educated us with humour and profound passion. Obviously Pete loves this fantastic city.He took us to places we would otherwise have never known about. Thanks Pete for an unforgettable tour.

An absolute must! What a fun way to see the neighborhoods of Berlin and learn the way locals live. You learn about the street art and the history of the neighborhoods. We ended the day with drinks at this local bar hot wine and beer. I'm still friends with my guide and a few others I met on the trip.

Jason, our guide for this tour was excellent in his history, his humour and interest in Berlin and its heritage. We took this tour to get an insight of East Berlin culture and he fulfilled and exceeded our expectations.
Thank you Jason.

Excellent tour which gave an insight into many different areas of Berlin. Extremely knowledgeable guide and some well recommended eateries in Kreuzberg. Highly recommend.

So g glad we did this tour. Great guide. An exploration of Berlin we never would have known about!

Wow our guide Joe was so knowledgeable....highly recommend this tour....have to be able to stay up with the walking, we went from one side of town to the other and the history was explained well and in sequence....well done

Wonderful experience. Jason was an exceptional guide .....extremely knowledable and highly entertaining. I would do this tour all over again. !!!

Reta is a great trip guide, she's opened to questions and has a great english.

This was an amazing tour. This tour as stated in the title was extremely unique, from learning about graffiti to the architecture of neighborhoods in the city and of course the history of Berlin and the famous Berlin wall. There was a little bit of everything out of the ordinary. Our tour guide Jason was very knowledgeable on the everything about Berlin. There was a lot of walking on this tour but well worth all the exercise.

We had an excellent tour with Peter as the guide. He is clearly knowledgeable about Berlin and brought to life the various figures and eras in the city's rich history, providing cultural insight that we didn't expect to learn about but were delighted to do so. He clearly has done his homework and it shows! What a rich and extremely worthwhile experience.

Peter led us on a memorable tour of Berlin's Prenzlauer and Kreuzberg neighborhoods. Not only did we see these neighborhoods to the extent possible through the eyes of their residents, but we experienced their roots by way of our guide's intimate knowledge of their history. He really brought the dramatic lived experience of 20th-century Berlin to life by sharing his family history. I cannot imagine a better way to get to feel at one with the lives of the people of this marvelous city.

Reetta was an amazing tour guide. She was so knowledgeable about the places we visited and the graffiti we saw, how it was done and about the people who painted them. So interesting! Make sure you have a travel pass as you visit a few neighborhoods by public transport. The walking is very leisurely and we ended up in a great beach bar! Would highly recommend this tour.

This walking tour was my favorite daytime activity I did in Berlin. The guide, (Cullen?), was so unbelievably knowledgeable and also quite personable. I would give this tour and this guide the highest possible recommendation!

Really enjoyed this walking tour. Takes you out of the touristy areas and deeper into some neighbourhoods you may not discover on your own. Our guide Jason was very well informed with an interesting perspective on Berlin street art and its culture.

Great tour and our guide was super energetic and knowledgable.

Great tour - gave me a good overview of the neighborhoods and where to go by myself later. Guide was also very fun.

Fabulous and unusual trip. Excellent guide who knows all the ins-and-outs of Berlin