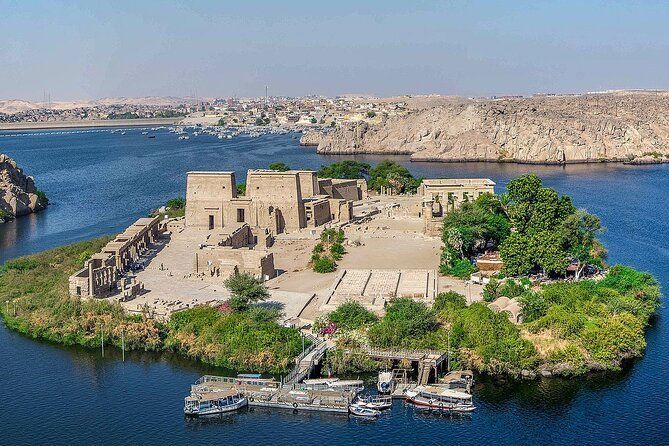 Enjoy full Day Tour to Aswan from Luxor by Road in accompany of an Egyptologist tour guide, follow the Nile River and passing through farmland and traditional Egyptian villages, you will stop to visit Edfu temple, Kom ombo temple, the unfinished obelisk and Philae temple Island of the Goddess Isis, enjoy your Lunch in Aswan before return journey back to Luxor by your Seated Train (almost 3 Hours transfer)

Enjoy full Day Tour to Aswan from Luxor by Road in accompany of an Egyptologist tour guide, follow the Nile River and passing through farmland and traditional Egyptian villages, you will stop to visit Edfu temple, Kom ombo temple, the unfinished obelisk and Philae temple Island of the Goddess Isis, enjoy your Lunch in Aswan before return journey back to Luxor by your Seated Train (almost 3 Hours transfer)

Your Nile Holiday tour guide will pick you up from your hotel in Luxor to visit the temples of Edfu and Kom-Ombo and then Aswan high dam and the Philae Temple. Start with transfer to Edfu Temple is considered to be the best preserved cult temple in Egypt. Dedicated to Horus the falcon headed god which according to the Egyptian myths, it was the place where the falcon-headed god Horus revenged the murder of his father Osiris by killing Seth. The present structure dates from the Ptolemaic period (332 - 30 B.C.) and is remarkable in that it is the only known temple ever to have been completed in ancient Egypt.

Drive on to the temple of Kom Ombo standing on high grounds overlooking the Nile. Unlike most ancient Egyptian temples, is dedicated to two gods, the crocodile god Sobek and the falcon god Haroeris “Horus the Elder”. The temple is atypical because everything is perfectly symmetrical along the main axis. The existing temple was begun by Ptolemy VI Philometor (180–145 BC) and continued under later rulers, most notably Ptolemy XIII (47-44 BC), who built the inner and outer hypostyle halls.
At one time crocodiles basked on the River banks. A few of the some 300 mummified crocodiles found here are on display in the small on-site Crocodiles museum.

Lunch will be served at a good quality restaurant in Aswan and then proceed to visit the Aswan High Dam, a rock fill dam built across the Nile in Aswan, between 1960 and 1970 with the aim to regulate the Nile River flooding, to store the water for agriculture and to generate hydro-electric power.

Enjoy a short motor boat ride to Philae Temple Island, the most ancient structure in the Island was the temple of the Goddess Isis, ordered by the native Pharaoh Nectanebo I (380-362 BC). With many traces of Roman work most notable in the Kiosk of Emperor Trajan (98-117 ad). The temple complex was dismantled and moved to nearby Agilkia Island as part of the UNESCO Nubia Campaign project, before the 1970 completion of the Aswan High Dam. Enjoy a guided tour and then free time at leisure.

Afterwards you will have free time enjoy a walking tour in Aswan Souk or Sit at the café shop and enjoy the local pass by. Later on, take your Aswan to Luxor train ride (almost 3 hours). Pick up and transfer to your hotel in Luxor.

Confirmation will be received at time of booking.
All Travelers: Passports photocopies are required at time of booking.
Luxor pick up & Aswan Drop off hotels Names are Required.
Not wheelchair accessible.
Travelers should have a moderate physical fitness level.
Hundreds of speed bump roads make slow drive through many villages/towns.
Return trip from Aswan to Luxor, will be by first class Seated train.
This is a private tour/activity. Only your group will participate.
Face masks required for travelers in public areas.
Hand sanitizer available to travelers and staff.
Social distancing enforced throughout experience.
Regularly sanitized high-traffic areas.
Gear/equipment sanitized between use.
Transportation vehicles regularly sanitized.
Guides required to regularly wash hands.
Contactless payments for gratuities and add-ons