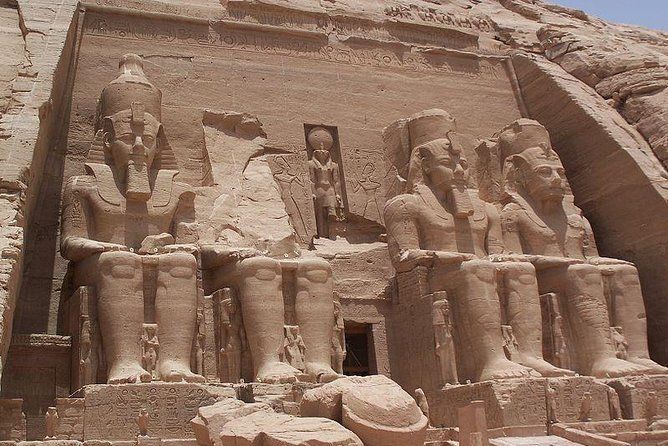 Explore the heart of Egypt on this 2-Day tour of Abu Simbel from Luxor. Enjoy a relaxing overnight stay in the Upper Egyptian city of Aswan and relax in the comfort of truly first-class transport and service.

Explore the heart of Egypt on this 2-Day tour of Abu Simbel from Luxor. Enjoy a relaxing overnight stay in the Upper Egyptian city of Aswan and relax in the comfort of truly first-class transport and service.

At 7:00 am Pickup from your Hotel or Nile Cruise in Luxor by El Sahel Tours Licensed Tour guide then you will be transferred by Private A/C Vehicle to Edfu City where you visit Temple of Horus in Edfu The Temple of Edfu it’s an ancient Egyptian temple located on the west bank of the Nile in the city of Edfu around an 1hr south of Luxor it was known in Greco-Roman times as Apollonopolis Magna, after the chief god Horus-Apollo.It is one of the best preserved temples in Egypt. The temple, dedicated to the falcon god Horus, was built in the Ptolemaic period between 237 and 57 BCE.

The inscriptions on its walls provide important information on language, myth and religion during the Greco-Roman period in ancient Egypt after you done your visit to Edfu Continue drive to Kom Ombo City where you you will visit the Temple of Kom Ombo it’s an unusual double temple built during the Ptolemaic dynasty in the Egyptian town of Kom Ombo.

Some additions to it were later made during the Roman period. The building is unique because its ‘double’ design meant that there were courts, halls, sanctuaries and rooms duplicated for two sets of gods.The southern half of the temple was dedicated to the crocodile god Sobek, god of fertility and creator of the world with Hathor and Khonsu,

Then Continue drive towards Aswan Arrival Aswan and transfer you to a local restaurant for lunch included After Lunch you will be transferred to Continue your day tour to Phila Temple it is an island in Lake Nasser, Egypt.It was formerly an island in the First Cataract of the Nile River and the previous site of an Ancient Egyptian temple complex in southern Egypt then End your day Tour By a visit to The High dam that was Constructed in 1961 by The President of Egypt Gamal Abdel Nasar.

Around 16:00 pm Transfer you to your Hotel to Check in overnight in Aswan

Pass By: Abu Simbel Temple Complex, Abu Simbel, Abu Simbel Egypt
Breakfast at the Hotel then at 3:30 am Pickup from your Hotel by our expert tour guide and Transfer you to Abu Simble by private A/C Vehicle.Abu Simble is located around 3 hrs drive south of Aswan Arrival Abu Simble at 7:00 am Start your Tour Visiting The colossal Temple of Abu Simbel built by Ramses II (XIXth. Dynasty) and lately saved from inundation of the Nile waters in among the glories of ancient Egyptian monuments. Then Transfer you back to luxor