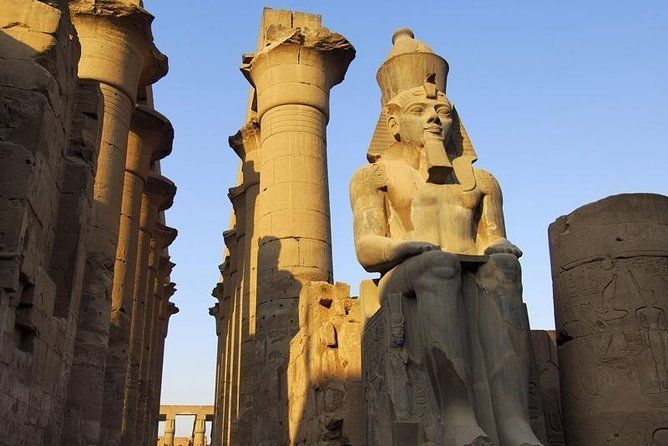 This tour starts with an early morning (4am) hotel pickup in an air-conditioned car. From there, at most, 8 people will embark on this 16-hour trip that will take you to the Valley of the Kings, The temples of Karnak, the Colossi of Memnon, and other important sites. This tour includes a lunch and all entrance fees.

This tour starts with an early morning (4am) hotel pickup in an air-conditioned car. From there, at most, 8 people will embark on this 16-hour trip that will take you to the Valley of the Kings, The temples of Karnak, the Colossi of Memnon, and other important sites. This tour includes a lunch and all entrance fees.

What You Can Expect

Early morning the tour guide will pick you up at 4am by car from your hotel In Hurghada and drive to Luxor.

You will start your trip from the east bank by exploring tour to the famous Temples of Karnak, the largest place of worship that was ever built. Its ancient name Ipet-isut means “the most sacred of places.” The temple, or, more correctly, the complex of temples, was built more than two thousand years ago by generation after generation of pharaohs. Within the complex, the great “Hypostyle Hall” is an incredible forest of giant pillars

After a fantastic morning exploring some of Luxor's impressive temples, you'll relax along the Nile at a local restaurant for a delicious Lunch with a wonderful Nile view.

Valley of the Kings

After lunch, you will take an afternoon trip to the west bank of the Luxor where is The Valley of The Kings, where, the magnificent tombs discovered, those tombs were carved deep into the desert rock, richly decorated and filled with treasures for the afterlife of the pharaohs. One of the most remarkable archaeological destinations in the world, the valley is known to contain 63 tombs and chambers ranging in size from a simple pit to a complex tomb with over 120 chambers.

It was widely believed that the Valley of the Kings had given up all its secrets and that all the tombs had been found throughout the thousands of years since their construction, however, Howard Carter's find of king Tutankhamen's tomb in 1922 proves that there may still be tombs waiting to be found.

After the Valley of the Kings, you will visit the funeral temple of Queen Hatshepsut the only female pharaoh rises out this beautiful temple which is different to many other ancient Egyptian temples with its lengthy terraces split over 3 levels. It's also called "temple of Al Dier El Bahari". Your tour guide will detail this magnificent temples history, including why it's so historically and architecturally important.

The Colossi of Memnon

Before leaving the west bank you will see the colossi of Memnon, listen to the story of these 2 statues and to know how they have stood in the Theban necropolis For the past 3400 years, moreover, you will have the chance to take a memorable picture there

By the end of the first day, you'll spend around 1 hour Luxor markets where you can make shopping like to visit a perfume shop & Papyrus Institute.

After seeing Luxor's most impressive sights you'll travel back to your hotel by car, getting back around 8.00pm in the evening.

Confirmation will be received at time of booking.
Not wheelchair accessible.
Not recommended for travelers with back problems.
Not recommended for pregnant travelers.
No heart problems or other serious medical conditions.
Most travelers can participate.
This is a private tour/activity. Only your group will participate.
Face masks required for travelers in public areas.
Face masks required for guides in public areas.
Face masks provided for travelers.
Hand sanitizer available to travelers and staff.
Social distancing enforced throughout experience.
Regularly sanitized high-traffic areas.
Gear/equipment sanitized between use.
Transportation vehicles regularly sanitized.
Guides required to regularly wash hands.
Regular temperature checks for staff.
Temperature checks for travelers upon arrival.
Paid stay-at-home policy for staff with symptoms.
Contactless payments for gratuities and add-ons