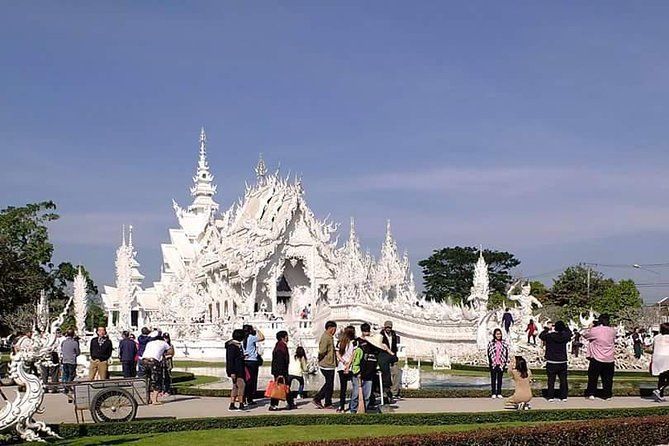 Chiang Rai Sightseeing Join Tour Our comfortable, well air conditioned van or car pick you up at your hotel between 7.45 am - 08.30 am.The first destination will be the beautiful White Temple. From there your sightseeing continue to Blue Temple,Black House,Long Neck Village,Choui Fong Tea Plantation,Mae Sai.Before Mae Sai we stop for a lunch break.After you have enjoyed your lunch the next spot is the Golden Triangle where you can visit Opium Museum and enjoy Mekong River view.Back to town.You be back at your hotel around 17.00 pm - 19.00 pm. Pick up only in a radius of 3 km from Chiang Rai Night Basar.

Transport in a/c minivan or car

Only pick up in Chiang Rai .

Chiang Rai Sightseeing Join Tour Our comfortable, well air conditioned van or car pick you up at your hotel between 7.45 am - 08.30 am.The first destination will be the beautiful White Temple. From there your sightseeing continue to Blue Temple,Black House,Long Neck Village,Choui Fong Tea Plantation,Mae Sai.Before Mae Sai we stop for a lunch break.After you have enjoyed your lunch the next spot is the Golden Triangle where you can visit Opium Museum and enjoy Mekong River view.Back to town.You be back at your hotel around 17.00 pm - 19.00 pm. Pick up only in a radius of 3 km from Chiang Rai Night Basar.

Transport in a/c minivan or car

Only pick up in Chiang Rai .

The white temple was created by Thai artist Chalermchai Kositpipat. With the construction of the temple he has set himself a memorial and made his hometown a great gift. The Ubosot is the absolute highlight of the visit.

Wat Rong Suea Ten is simply called The Blue Temple. The large ordination hall was completed in 2016 and is therefore relatively unknown to tourists. The name Suea Ten literally means dancing tiger. The temple is similarly rich in artistic value and just as fantastic in the execution like the white temple. The creators of this blue wonder were once the disciples of the builder of the White Temples

Baan Dam (Black House) is the unique creation of national artist, Thawan Duchanee. It is a part art studio and part museum. The black house is an eclectic mix of traditional northern. A collection of around 40 buildings of varying shapes and sizes dotted around a peaceful garden.

Longneck Karen is one of Karen tribes. They call themselves Padaung. It is believed that originally they came from Yunnan Province, central China. Later in 1000 AD according to the history, they migrated to Salween River Basin in Myanmar. In 1995, there were approximately 25,000 Padaungs living in Myanmar. They mainly live on traditional agricultural activities. After political incident against the minorities in Myanmar, Padaungs have evacuated from Myanmar and until now cannot fully identify where is the major location they are living in.

The high quality tea manufacturer for half a century.
With plantation area of over 1,000 rais in high mountain,
all teas are grown under optimal conditions then hand picked at the perfect time.

Mae Sai, or locally more often, Maesai, is the northernmost city of Thailand. It is mainly a stepping stone for visits to Myanmar and has few attractions of its own.

The Golden Triangle is a region in the Laos, Thailand and Myanmar borderlands where opium poppy is grown and processed into heroin. The significance of the Golden Triangle as a supplier to the global heroin market has dropped significantly as a result of drug production in Afghanistan.

The Golden Triangle is synonymous with opium, heroin, and drug trafficking in Southeast Asia. The term dates back to 1971. It goes back partly to the geometric shape of the triangle-forming countries Myanmar, Thailand, Vietnam and Laos, on the other probably on the gold, with the Chinese traders initially paid the opium.

The museum was founded by Patcharee Srimatyakul in 1990. Born in the area, Patcharee had a passion for collecting opium paraphernalia and memorabilia. When she noticed that opium items were becoming extremely hard to find — with Thailand cracking down on the illegal drug trade — she turned the collection into a museum open to the public.

Confirmation will be received at time of booking.
Wheelchair accessible.
Stroller accessible.
Near public transportation.
Infants must sit on laps.
Transportation is wheelchair accessible.
No heart problems or other serious medical conditions.
Most travelers can participate.
This experience requires a minimum number of travelers. If it’s canceled because the minimum isn’t met, you’ll be offered a different date/experience or a full refund.
This tour/activity will have a maximum of 15 travelers.
Face masks required for travelers in public areas.
Face masks required for guides in public areas.
Face masks provided for travelers.
Hand sanitizer available to travelers and staff.
Social distancing enforced throughout experience.
Regularly sanitized high-traffic areas.
Transportation vehicles regularly sanitized.
Guides required to regularly wash hands.
Regular temperature checks for staff.
Paid stay-at-home policy for staff with symptoms.
Contactless payments for gratuities and add-ons

For the price, I think this is a good tour. It takes you to the main attractions like the White and Blue temples, and the Golden Triangle. We went at a downturn in the tourism market so there weren't many tourists anywhere we went, which worked in our favour. I'm not sure if it's always that quiet at these attractions. The lunch at a very cute farm/cafe was fantastic; eating our Pad Thai and drinking some kind of fruit drink, sitting outside (but under cover) and appreciating the view and the breeze. It was lovely.

If I had the option, I would leave out the long neck tribe visit. It's just a market owned by some of the long neck tribe, and essentially turns their people into a zoo attraction. That said, I understand that this is how they make their money so I get why we need to support it. We didn't see much of the other tribe of people in that area, as their market was closed because they were at church (we went on a Sunday morning).

Overall, it's a decent tour. Our driver Sam was always smiling, and our tour guide Rose was helpful and answered any questions we had.

Great trip with good information provided by John, he was entertaining, friendly and did his best to provide a good experience for everyone. The Golden triangle and history of the opium trade was fascinating and all the temples were beautiful in different ways. The long neck hill tribe visit was interesting and we had a great driver called Mr M and the lunch was very nice to. Overall a great day out.

I did not receive any confirmation before the trip. Only received call from lobby on booking date that the van was downstairs waiting for us and taken us by surprise. Overall the trip was good but a little rush.

Cookie was a lovely guide, she was friendly and on time for pick up and our activities during the day. The temples were amazing.... definitely a must see on a visit to Chiang Rai. Be prepared to pay entrance fees to some temples, the Karen hill tribe and the opium museum, should you wish to go inside. Amazing lunch at an organic cafe in the rice paddies. Beautiful and peaceful place. Would definitely recommend this tour!

Great tour when you don’t have enough time to do things at a slower pace. One negative was the Karan tribe visit, I didn’t take part. I thought as I booked with a reputable company like Viator that it would be conservation project but it wasn’t. Exploitation is what came to mind.