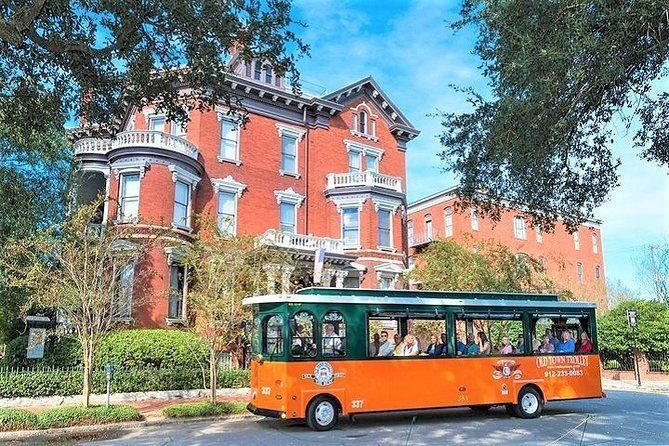 Mercer House, now called the Mercer Williams House Museum, is located at 429 Bull Street in Savannah, Georgia.[3] Completed in 1868, it stands at the southwestern corner of Monterey Square. The house was the scene of the 1981 shooting death of Danny Hansford by the home's owner Jim Williams, a story that is retold in the 1994 John Berendt book Midnight in the Garden of Good and Evil.

Forsyth Park is a large city park that occupies 30 acres in the historic district of Savannah, Georgia. Known for it's famous beautiful Forsyth Fountain.

Colonial Park Cemetery is a historic cemetery located in downtown Savannah, Georgia. It became a city park in 1896, 43 years after burials in the cemetery ceased. The cemetery was established in 1750, when Savannah was the capital of the British Province of Georgia, last of the Thirteen Colonies.

The Cathedral Basilica of St. John the Baptist is a Roman Catholic cathedral and minor basilica on Lafayette Square. It is the Mother Church of the Roman Catholic Diocese of Savannah.

Florence Martus (1868-1943) is remembered by this statue showing her greeting ships as they came in and waving to them.

The Isaiah Davenport house is a historic home in Savannah, Georgia, United States, built in 1820. It has been operated as a historic house museum by the Historic Savannah Foundation since 1963. The house is located at 324 East State Street, on the northwest corner of Columbia Square.

Telfair Museums, in the historic district of Savannah, Georgia, was the first public art museum in the Southern United States.

Ships of the Sea Maritime Museum features nine galleries of ship models, maritime paintings, and artifacts. The vast majority of ship models were commissioned by the Museum to interpret Savannah's rich maritime history. The museum is housed within a National Historic Landmark built in 1819 for William Scarbrough, the principal owner of the Steamship Savannah (the first steamship to cross the Atlantic Ocean).

Confirmation will be received at time of booking.
Standard-sized wheelchairs can be accommodated on this tour, please contact the local operation to request a wheelchair-accessible trolley. We request 24-hour advance notice.
Wheelchair accessible.
Stroller accessible.
Service animals allowed.
Near public transportation.
If your wheelchair is collapsible and the guest utilizing it is ambulatory and able to use any of the seats provided on the tour vehicle, the wheelchair can be collapsed and stored on the tour vehicle and the guest and their party may make full use of the on/off privileges. Please make our CASTmembers aware of this fact if you intend to make use of the tour in this manner..
Emotional Support Animals are Not allowed on the Tour.
Most travelers can participate.
2-Day ticket must be used on consecutive days.
This experience requires good weather. If it’s canceled due to poor weather, you’ll be offered a different date or a full refund.
This tour/activity will have a maximum of 15 travelers.
Face masks required for travelers in public areas.
Face masks required for guides in public areas.
Hand sanitizer available to travelers and staff.
Regularly sanitized high-traffic areas.
Gear/equipment sanitized between use.
Transportation vehicles regularly sanitized

This tour is amazing! Afterwards you will know exactly were to walk! The Trolly Tour gives you the opportunity to get to know the beautiful city of Savannah even more. Tony, our guide was doing an amazing job in making this tour an experience we will never forget! You have to take it ;)

My 34 year old son and I decided to do the hop on and off tour. It was very cold in Savanah but as soon as we got on the trolly it was nice and toasty. The window are covered with heavy plastic and no draft at all. Very comfortable! I can’t remember our first narrator but I want to say Carlos. Loved him! The price is so worth it why? You can hear an informative narration, friendly drivers, tour of the entire historical district, pick up drop off every 15-20 minutes, comfy trolly, hop off and on all day, save money on parking and they do the driving. You can save a few dollars if you have a code, usually a hotel has these where are their tourist pamphlets are. First or even 10 th time. I would recommend this trolly. I’ll be back.

Drivers had great information and stories. If you get on a bus with Captain Phil, you’ll be tempted to stay on the bus all day just to hear his stories.

Grey tour guide (Tony) very informative and a great sense of humor! The trollt was nice and warm and we enjoyed our ride

Tony was our tour guide and he was fantastic!!! Highly recommend!! Tours are a great way to see the city.

Squares were nice. That was it. Nothing more to say. Nice weather. Outside the historical district Savannah is pretty seedy.

It was an awesome way to see a lot of the important sites in Historic Savannah. All 4 conductors did an awesome job!

Overview amd comments from the driver We sHould jave ised free pibllic tramsportation or walked Way too expensive for.wjat we got

It was a just okay tour. I was not happy about the bashing of Paula Deen just to make people laugh at her expense! That was uncalled for and went on much too long. We saw more of beautiful Savannah while driving on our own. So, not really worth the price!

This was a great way to see a lot of the sights in Savannah. You can pop on and off at different stops if you choose. The driver had a ton of interesting things about each place on the tour. I took my mom who is 82 and she loved it. It would be very easy for families with kids as well. We did not get off on any of the stops. The entire tour only took about a hour and half!!!!!

Exactly what it needs to be, easy to use, We enjoyed our knowledgeable guides and the convenience of the service.

I would highly recommend doing this if you’re visiting Savannah for the first time. You can hop on and off at any point, and the tour guides were all very knowledgeable and well-spoken. They operate from 9am-5pm, with the last trolley leaving at 5pm and taking you back to the main center. They provide running commentary about all the stops and you’ll be able to thoroughly cover your bases with a tour. They have $5 off coupons at random places in the city (we got ours from the Leopold’s) and you can pay at the center. Credit cards are accepted there. It’s a kid-friendly activity. About half the people did wear the masks, while the other half didn’t. It’s open seating and there are transparent shades if it’s too sunny. The steps going into the bus are pretty steep and someone did fall coming down, so be careful! Overall, it was a fun experience for those looking to get a sense of Savannah.

Our hop on hop off trolley tour was so great with Gina we didn’t want to get off . She had great stories and even played some awesome audio clips to make it more interesting. Even though we’ve done the tour before we learned so much. Savannah is such a beautiful city to explore. The trolley tour is a perfect way to start your day. Whether you’re there for a day trip or you have days to explore the history of the city and lay out will help you make the best of your time. We wished we had had more time to go in more of the museums.

What a great way to experience Savannah. It was colder than we expected the day we visited so rather than walking we decided to take this trolley tour. Our driver , Brian, did a fantastic job of sharing historical and cultural information about the area. He also gave several recommendations on places to eat and things to do in the vicinity. We loved that we were able to hop on or off at any stop. In fact we purchased our tickets online and jumped on in the middle of the route, and then transferred trolleys back at the visitor center to hit the beginning of the tour. Highly recommend.

Awesome. Totally recommend the Savannah Trolley Tour. More than triple worth the value. The tour guides each bring forth their wonderful personalities to the tour. The length of the tour is 90 min. 15 Stops. Hop on Hop off. 5 stars to David, Cysanthem, (apologize misspelled her name), excellent. This is the best way to see Savannah. Free Parking at the foot of the down ramp of the bridge from Harleyville, SC. Trolley's run every 15min, from 900am to 500pm.

Excellent tour. We had Sue she was fantastic. Very interesting learning some of the history of Savannah. Absolutely beautiful city. The tour is a must do.

We went on the hop on hop off trolley today and we were thrilled. We saw so many fantastic sites , and were able to walk to each area that we wanted to explore. We would like to shout out to two exceptional tour guides: Cynthanea and Captain Phil. Loved our experience in Savannah.

The best way to see Savannah! Tony was an AMAZING guide. Funny, friendly, and full of really cool information about the city's history. We decided to take the tour all the way through with no hop offs because he was so great.

Tony was amazing highly recommend. He was funny and the tour was very low stress. Got to see some amazing sights great outline of Savanah.

Great tour. Tony is the best tour guide. Lots of fun. Great information. The kids even enjoyed it! Thanks for the fun experience.

Wonderful tour! Our tour guide Tony was great! Lots to see and information on Savannah was awesome. Definitely recommend

Tony was awesome! He was very friendly and knowledgeable . I’ll take tour over and over with Tony. My entire family enjoyed the tour

Tony was a fantastic tour guide. Very knowledgeable and pleasant to listen to. So glad we did this tour.

We did the hop on hop off pass. We took the suggestion of some and did thr full circuit then we knew where we wanted to go back to. The guides are knowledgeable and have interesting tips to share. One of the guides was kind of full of himself, but had a sense of humor that many of the passengers seemed to appreciate. It was a good experience to learn about a community and what help to make it what it is today.

Excellent! Great way to get a lay of the land and a good tour on your first day. Many convenient stops. Would do it again.

Very relaxing and informative tour around the city from Ruben. Also doubles as a form of transportation to all the spots around Savannah

The best way to see and learn about the beautiful city of Savannah, GA is to first take a two hour tour with Old Town Trolley Tours! Our trip with Captain Phil was informative, enlightening, and entertaining. Captain Phil was, first of all an excellent driver, but more importantly knowledgeable and funny! Start your visit to Savannah with a tour. Jot down some of the highlights where you want to go back and visit, then just start walking this easily walkable town.

I wanted to get a general lay of the land in Savannah today so I did a hop on hop off trolley day. At the end of the day I had to switch onto another trolley at stop 1 so I could go to stop 2 for my drop off. Captain Phil took the wheel and the mic and I wound up staying aboard for FAR more than the one stop. He was FANTASTIC! Full of great insight and humor. Thanks for a great ride and wonderful information!!! Hope you got your pint and bangers and mash after you finished.