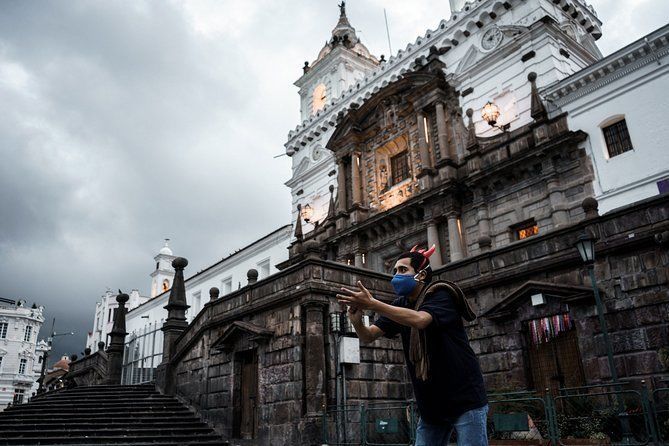 Admire the spectacle of the illuminated churches and its main tourist attractions.
Our guide will tell you about urban legends that are part of the history of Quito and that are a tradition and the cultural heritage of the people of Quito.

Admire the spectacle of the illuminated churches and its main tourist attractions.
Our guide will tell you about urban legends that are part of the history of Quito and that are a tradition and the cultural heritage of the people of Quito.

Considered to be the largest neo-gothic temple in America, its structure and style is compared with two of the great cathedrals around the world: St. Patrick's Cathedral (New York) and Notre Dame (Paris).

It's the main square of the city of Quito where the Government Palace is located the Absobispal Palace, the municipality and the Independence's monument.

One of Quito's best-known Jesuit churches due to its large central nave, which is deeply decorated with gold leaves, gilded plaster and wood carvings

The Plaza San Francisco is located in the historic center of the city. It's dominated by the imposing facade of the Church and convent of San Francisco, from which it takes its name, settling in one of the most representative urban scenes of the city since colonial times.

Its structure is the largest architectural complex within the historic centers of Iberoamerica.

The structure of the church is the largest architectural complex within the historic centers of Iberoamerica.

An iconic place in the city, renowned for its beauty, and where is a giant statue of the "Winged Virgin", where you can admire a beautiful landscape of colonial and modern Quito

Confirmation will be received at time of booking.
Children must be accompanied by an adult.
Not wheelchair accessible.
Near public transportation.
Infants must sit on laps.
Optional pick-up and drop-off from selected hotels at an additional cost..
Most travelers can participate.
This tour/activity will have a maximum of 20 travelers.
Face masks required for travelers in public areas.
Face masks required for guides in public areas.
Hand sanitizer available to travelers and staff.
Social distancing enforced throughout experience.
Regularly sanitized high-traffic areas.
Gear/equipment sanitized between use.
Transportation vehicles regularly sanitized.
Guides required to regularly wash hands.
Regular temperature checks for staff.
Temperature checks for travelers upon arrival.
Contactless payments for gratuities and add-ons.
• The activities will not exceed 6 people per group. • The capacity of the means of transport will be reduced to 25% of their maximum capacity. • In the monuments, museums or attractions, the capacity will be reduced to 30% of its maximum capacity.

Through Viator we booked three tours. Two were outstanding and this last one, offered by Gray Line Tours, was extremely disappointing. Our guides were cordial but really did very little to communicate to us anything about the city that we were driving through at night. I'm not certain our driver had very much experience maneuvering a large bus through the very narrow streets, some of which were unfortunately closed due to a demonstration that I think the tour company should have been aware of. The high point of the tour, despite the rather perilous ride, was going to the top of Panicillo and seeing the Virgen del Quitó illuminated. It was rather strange to be the only people on an entire tour bus. I believe Gray Line would have been better off either offering us a refund or providing a smaller car with a driver. This was very impractical. The tours that were booked through the other companies to Otavalo and Mindo were so far superior that this was really rather a disappointment.

Pick-up was mixed up. Tour was okay, most places were closed when we walked around. Visited the large statue overlooking the city at the end of the tour and entrance to climb inside to see the city view was closed when we arrived.

Trip was very nice and interesting. Full day was raining and during tour it stopped. With me also were 3 Canadians, very friendly people. We stopped at Basilica church, Plaza Grande and Angel on the top of hill, also get very testy local alcoholic hot drink. Guide girl was very nice and with good experience.

Great way to see Quito on limited time. We traveled to Ecuador for a Galapagos cruise and found ourselves with only a small amount of time in Quito. The traffic from airport into town takes over 1 hour so by the time we were checked in to hotel it was 4pm and we were flying back home the next day. The tour left shortly after 7 and stopped at the main cathedral first. We then went on a 45 minute short and easy walking tour through the main historic district of Old Town and saw many old churches/monastereries 15th-18th centuries, and the Ecuadorean presidential palace all lit up at night. We then traveled to a hill top overlooking the city with a giant statue of the virgin Mary with Wings and afterwards tasted some local cuisine from street vendors at the top note we did not do dinner portion of tour. Well worth 20 per person to see a very pretty city with great history. Our tour guide was extremely knowledgeable in Ecuadorean history, culture, and showing things on the tour and spoke decent albeit not excellent English. Would recommend tour.

Great way to see the beautiful city at night

A good way to visit the main sights with opportunities for guided exploration of much of the main venues on foot with a English-speaking guide.