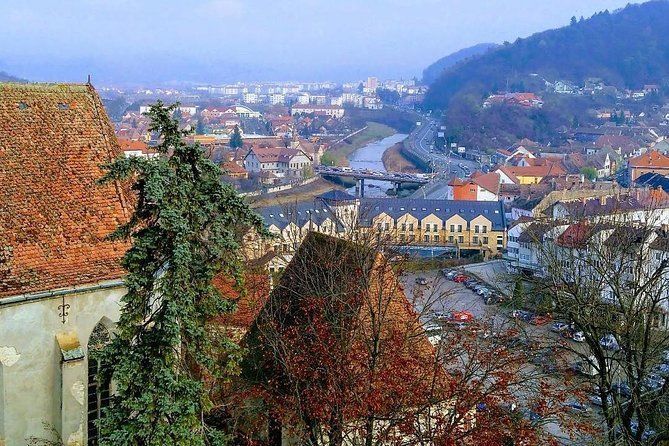 Book 3-day round-trip Best of Romania tour from Bucharest with 2 nights Brasov. This three full-day small group program was designed to offer to the visitors an insightful glimpse over the mythical land of Transylvania. Pick up and drop off at your hotel in Bucharest. Enjoy guided sightseeing tours in Brasov, explore Sighisoara medieval town and walk on Vlad the Impaler path! Discover the place where Vlad Dracula was born! Visit astonishing Peles Castle and the famous and Bran Castle and discover the truth behind the legends! Visit The Bears Sanctuary, the largest brown bears sanctuary in the world and prepare your camera for amazing pictures! Discover the legends behind the mysterious Rasnov Fortress! Visit Snagov Monastery and see the tumb where Vlad the Impaler is buried! Spend 2 nights in 3- stars authentic pension, breakfast included.

Book 3-day round-trip Best of Romania tour from Bucharest with 2 nights Brasov. This three full-day small group program was designed to offer to the visitors an insightful glimpse over the mythical land of Transylvania. Pick up and drop off at your hotel in Bucharest. Enjoy guided sightseeing tours in Brasov, explore Sighisoara medieval town and walk on Vlad the Impaler path! Discover the place where Vlad Dracula was born! Visit astonishing Peles Castle and the famous and Bran Castle and discover the truth behind the legends! Visit The Bears Sanctuary, the largest brown bears sanctuary in the world and prepare your camera for amazing pictures! Discover the legends behind the mysterious Rasnov Fortress! Visit Snagov Monastery and see the tumb where Vlad the Impaler is buried! Spend 2 nights in 3- stars authentic pension, breakfast included.

Pass By: Bucharest Municipal Museum, B-dul I.C. Bratianu nr.2, sector 3, Bucharest Romania
Pick you up from your hotel in Bucharest.

Stop At: Peles Castle, Str. Pelesului 2, Sinaia 106100 Romania
Our first destination is the tourist town of Sinaia, where Peles Castle is located, the summer residence of the former Romanian royal family. Peles Castle is one of the most beautiful museums in Romania and was built in almost 40 years by King Charles 1.
Duration: 1 hour 55 minutes

Stop At: Bran Castle (Dracula's Castle), Str. General Traian Mosoiu nr. 24, Bran 507025 Romania
Next stop is the infamous Bran Castle, aka Dracula Castle where you will discover the truth behind the legends! To get there we must go trough Prahova Valley. Breathtaking natural beauty are opened in front of your eyes but the most spectacular view is from Busteni where you can admire the peaks of Bucegi Mountains.Traditional lunch can be arranged in Bran village.
Duration: 1 hour 15 minutes

Stop At: Rasnov Citadel, Unirii Square no. 12, Rasnov 505400 Romania
Travel to Rasnov town which, besides the picturesque streets with medieval houses orderly arranged, will enchant you with gorgeous Rasnov Fortress, one of the best preserved peasant fortress of Transylvania, which was built in 13-14 centuries by the inhabitants of the settlement with the same name. Beautiful panorama over Barsa Land from the very top of the fortress.

Pass By: Brasov Historical Center, Piazza Sfatului, Brasov Romania
Pick you up at 9am from the hotel in Brasov.

Stop At: Viscri Fortified Church, Viscri 507039 Romania
Visit Viscri, an authentic Transylvanian village and the oldest fortified church in Transylvania and UNESCO world heritage site. Walking through this enchanting village is like going back in time! Even Prince Charles of Wales, attracted by the beauty of this area, bought a house here a few years ago.

Time allocated for taking pictures and walking through the village. Your guide will lead you to the best spots!

Walking along the wall that surrounds Sighisoara citadel we admire the five centuries old houses along with the towers erected by various guilds of the citadel, from which the Shoemakers, Tailors and Tin Makers Guilds towers are the most impressive. We visit the Church on the Hill but not before climbing the 175 covered steps which were built in 1642 in order to make easier access for the schoolchildren's. From this highest point of the citadel you have the view of whole citadel, so don't forget your camera!

After Sighisoara old town visit, head to a local restaurant for lunch of fresh salads, traditional soups, delicious sarmale, meat, chicken, vegetables and other regional fares (drinks and meals at own expense). Traditional lunch can be arranged in Sighisoara medieval town at Dracula House Restaurant!

Stop At: Libearty Bear Sanctuary Zarnesti, DN 73A km 6 - near the entrance in Zarnesti from Rasnov, Zarnesti 500075 Romania
Breakfast. Pick you up at 9 am from Casa Timar.

Visit The Bears Sanctuary which is located in the forest, 2 km away from Piatra Craiului National Park. It covers an area of 69 hectares of forest, streams and ponds where around 100 brown bears live. It is the biggest of this kind in the entire world. Prepare your cameras!
Duration: 1 hour 20 minutes

Stop At: Snagov Monastery, North of Bucharest 40km Snagov Island, Snagov 077165 Romania
About 45 kilometers north of Bucharest, on an island in the middle of Snagov Lake, lays the monastery with the same name. Built around the time of Vlad the Impaler’s grandfather, Mircea the Old, the monastery has become famous as the burial place of the king of Walachia who would become the inspiration for Bram Stoker’s Dracula.

There are many gaps to fill when it comes to the life of Vlad the Impaler. While his life have been exploited and his heroic battles against the Turks highly praised, little is known about the last hours of his legendary life. It is believed that Vlad’s decapitated body was found in the woods around Bucharest by the monks of the Snagov monastery and brought here to be buried since both Vlad and his father had donated money to the church. But Snagov was also a place of punishment. In a small cell, Vlad the Impaler invited his victims to kneel in front of an icon of the Virgin Mary. Suddenly a trap door would open and his guest would be sent to a ditch below where stakes stood erect ready to pierce his body. Decapitated skeletons found here stand as proof of these horrific crimes.

Another legend says that after the battle with the Turks in 1476, subsequent to which he died, the body of Vlad the Impaler was secretly buried in the Christian manner inside either of the churches. In one version of the story, Vlad was murdered in a nearby forest, and the monks of the monastery found the body. Perhaps the monks felt indebted to Vlad for the additions he insisted be added to their abode, most bizarrely, the prison and the torture chamber. Whatever the reasons, the monks dressed the body richly and put it to rest in front of the church altar.

The Legends of Snagov Monastery

Peasants talk about the “hidden treasures” of the Impaler. Sensing death, Vlad had them make cast-iron barrels in which he placed silver, gold and precious jewels; he then ordered the course of a river to be diverted by a dam (perhaps the Dambovita river) after getting rid of the riches, he gave free flow to the river and all the peasants involved were IMPALED!

Visitors who cross the lake by boat or over the bridge, reach the quiet, remote monastery that brings the legend alive! One can pay his respects at Dracula’s tomb, located at the altar footsteps, and admire the beautiful frescoes, some of which go as far back as the 15th century. Locals tell stories about a different church that existed here, which fell into the lake together with its steeple, during a storm. When the wind blows they say you can hear a chime rising from the bottom of the lake.

Nevertheless, people are superstitious and the monastery has had its fair share of bad luck: floods, earthquakes, the burning of the bridge connecting it to mainland during the 1821 revolution as well as being transformed into a prison in the 19th century. Although there has been a lot of debate around the real tomb of Vlad the Impaler and whether you are a Dracula fan or not, the monastery of Snagov is worth a peak! It was once an important hub of the cultural and monastic life: it hosted a printing shop as well as a mint…When coming here travelers understand why it was used as refuge as well as a prison… As for the vampire hunters…what better place to end a trip to Romania than the legendary burial place of the count of all counts: Count Dracula?!

Confirmation will be received at time of booking.
Not wheelchair accessible.
Vegetarian option is available, please advise at time of booking if required.
A moderate amount of walking is involved, comfortable shoes recommended.
Operates in all weather conditions, please dress appropriately.
This is a private tour/activity. Only your group will participate

Seeing this area of Romania through Bogdan's eyes, experiences and passion gave us a deep respect and love for his country. Very difficult to pick favourite locations...the architecture, the history and the colours created memories that are unique to each. With Bogdan by our side all the time, we felt we missed nothing, and he was always so willing to answer any questions or requests. We do not hesitate to recommend this fine man as a guide, driver, and now we are very fortunate to consider him as our friend. Thank you Bogdan.