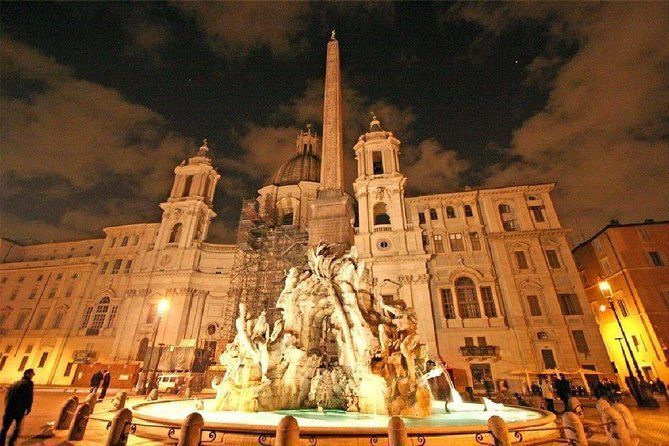 Watch the sunset across the romantic squares of Rome on a 3-hour small-group tour of the city’s historic piazzas. Marvel at Baroque fountains and statues. Learn the story of some of the city’s most important meeting points, such as Piazza Navona, the Pantheon, the Trevi Fountain, the Spanish Steps, and many more important and famous squares of Rome.

Watch the sunset across the romantic squares of Rome on a 3-hour small-group tour of the city’s historic piazzas. Marvel at Baroque fountains and statues. Learn the story of some of the city’s most important meeting points, such as Piazza Navona, the Pantheon, the Trevi Fountain, the Spanish Steps, and many more important and famous squares of Rome.

Begin your tour in Piazza del Popolo, where you'll meet your guide. Hear about how this square was formerly used for popular games and public executions, and is now a lively space for concerts. Learn about the vision of its architect, Giuseppe Valadier.

Continue to Pincio Terrace to see the sunset over the rooftops of Rome.

Next, go to the Trevi Fountain on Piazza di Trevi, and throw a coin in the pool according to tradition

See the historic Pantheon on Piazza della Rotonda, built in 27 BC as a temple to all the gods of Rome

Wander over to Piazza Navona, built on the site of a Roman amphitheater. Experience 'La Dolce Vita' of Rome around Bernini’s magnificent Four Rivers Fountain in its center.

End on Campo de' Fiori, dominated by the statue to the poet and philosopher, Bruno Giordano. Learn about his trial for heresy, and how he was burned at the stake at the medieval marketplace in the 16th century.

Confirmation will be received at time of booking.
Please be at the meeting point 15 minutes prior tour departure.
In winter time, please carry a coat with you and an umbrella in case of rain.
In summer time, please carry a bottle of water and an umbrella to shade during the tour.
Not wheelchair accessible.
Stroller accessible.
Near public transportation.
Most travelers can participate.
This tour/activity will have a maximum of 15 travelers.
Face masks required for travelers in public areas.
Face masks required for guides in public areas.
Hand sanitizer available to travelers and staff.
Social distancing enforced throughout experience.
Regularly sanitized high-traffic areas.
Gear/equipment sanitized between use.
Transportation vehicles regularly sanitized.
Guides required to regularly wash hands.
Regular temperature checks for staff.
Temperature checks for travelers upon arrival.
Paid stay-at-home policy for staff with symptoms.
All health and safety measurements place by the Italian Government have been placed on our tours.

The rain didn’t stop us from enjoying this very interesting and highly educational walking tour. It was a beautiful history lesson. I definitely recommend starting your Rome vacation off with this tour. Our tour guide was incredibly knowledgeable and fun!

Our tour guide Erturk Durmus? from Mea Tours was fantastic! My husband and I were lucky enough to have him all to ourselves through our tour of the various historic piazzas. He was a fount of information and took the time to give as all the details of the various sights. I'm an Ancient history enthusiast and our guide was patient and courteous with all my detailed inquiries into ancient Roman life, architecture and politics. I'm not sure I got his name right, but Erturk was the best tour guide we ever had. He was truly exceptional and his English was perfect.

This was the best thing we did in Rome. Yes THE BEST.

Our tour guide was absolutely fantastic. She gave us history and fun facts. She went at our speed since we don't walk the fastest. She also gave us 2 fantastic restaurant recommendations and we loved both.

Put this on the list - the piazzas and fountains are different at night than they are during the day.

The climb up to see the sunset over Rome was definitely worth the hike up there.

This is a great tour.
We enjoyed the tour and our guide.
Would do it again!!!

Our guide was so knowledgeable and nice, we really enjoyed every minute of this tour.

This tour was one of the best we had with Viator. Especially the excellent guide Maurizio Giano. My wife and I enjoyed it from the beginning to the end. The guide gave us all the historical insights of Rome and its famous places and Piazzas . I highly recommend this tour.

This tour was perfect for us! The guide took us to see the beautiful plazas in Rome! It was enchanting!

I would highly recommend this. We had a blast. Our tour guide, Elaine, was amazing. Our group hung out afterwards and continued our partying. We tasted local food and love every minute of it.

We love this small tour, even we very tired from the other tour in the morning, but we very excited and also we have very friendly tour guide, she explain very clear with some jokes. We like her and also enjoy this walking tour in 3 hours.sorry we forget tour guide name