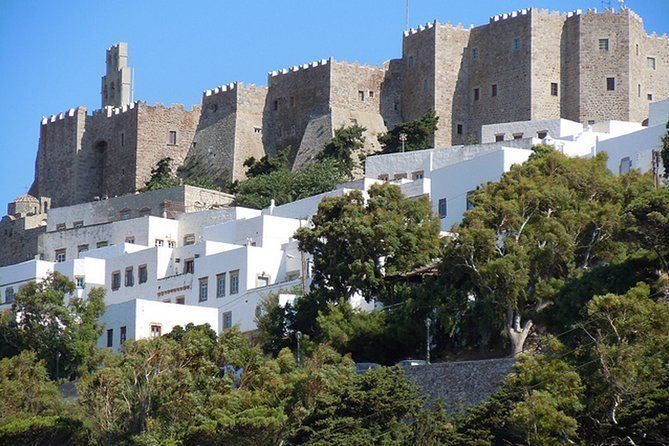 You have the great opportunity to visit the island of Patmos from Samos. Considered one of the holiest places, some refer to Patmos as a second Jerusalem.

You have the great opportunity to visit the island of Patmos from Samos. Considered one of the holiest places, some refer to Patmos as a second Jerusalem.

Let yourself be impressed by the ascetic, almost unapproachable face of the island, which seems to consist only of rock, jagged lava rock and deeply cut bays. Patmos still retains his Byzantine past as a former refuge for Christian monks.

History is particularly evident in the grotto that has become the cult, in which the Evangelist John had his vision of the world court. In the Apocalypse, one of the greatest texts of world literature, John wrote down his vision.

Visit the port of Skala and be impressed by the mighty St. John's Monastery, from the 11th century. The monastery museum shows valuable icons, golden jewelery, old measuring vestments, as well as hand-written bibles and writings. Both cultural lovers and nature lovers will be delighted by the island!

Either way, the whole island of Patmos is picturesque with its unique style of houses, wonderful beaches and the attractive traditional village of Hora.

Confirmation will be received at time of booking.
Children must be accompanied by an adult.
A dress code is required to enter Monasstery. No shorts or sleeveless tops allowed. Knees and shoulders MUST be covered for both men and women. You may risk refused entry if you fail to comply with these dress requirements