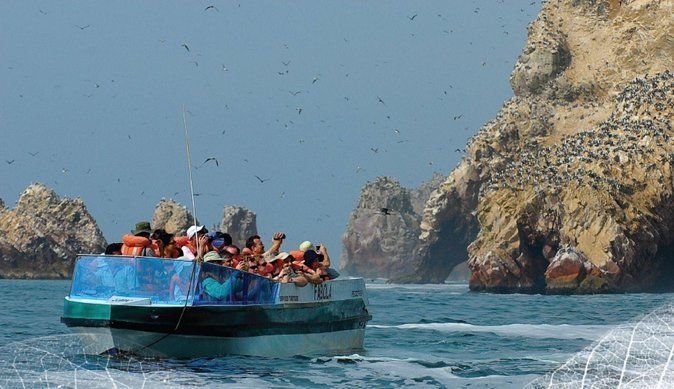 You are a lover of nature and culture, if your cruise docked at San Martin harbor, then do not miss a great adventure visiting the Ballestas Islands and the imposing Tambo Colorado, learn about culture and live an adventure in this incredible destination.

You are a lover of nature and culture, if your cruise docked at San Martin harbor, then do not miss a great adventure visiting the Ballestas Islands and the imposing Tambo Colorado, learn about culture and live an adventure in this incredible destination.

Our guide will be waiting for you at 9:15 with a sign with your name, after boarding our transport to the city of Paracas, we will continue to the beautiful city of Paracas where we will meet the rest of the group and board a speedboat to start a journey to the magnificent Isla Ballestas where depending on the weather conditions we can see the birds of the area, then we will stop at the Paracas peninsula to observe the enigmatic figure of the Paracas Candelabra, which is an impressive design drawn in the slope of a hill in the Peninsula, nobody knows with certainty who did it or because. There are many hypotheses that explains the reason for its origin, also being one of the mysteries of how they could make this figure in a place that has no tickets for boats, after seeing this enigma we will arrive at the Ballestas Islands where we can see sea lions and Pelicans, you will have time to travel around some islands and venture into caves, depending on the weather conditions. At the end of the tour by the ocean we will continue with our route until we reach the beautiful city of Pisco to have a moment of photos and pleasure for ourselves, then we will travel towards the east to reach the magnificent fortress of the tambo Colorado, which It was once an Inca settlement and was ruled by the Inca Pachacutec, it is also said that it was known as Puka Tampu, Pucallactay it is also said that the place before belonging to the Incas was a Huari settlement, in the place we can appreciate ceremonial places, homes, platforms for religious use and the imposing fortress as the main building. There is a hypothesis which says that the Tambo Colorado was a place of administrative, ceremonial and / or military nature, after having finished you take it back to the pier where you can board your boat and continue with your trip.