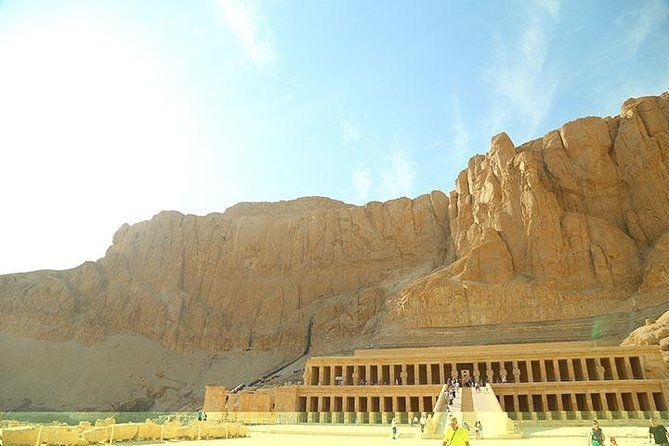 Recognize to the ancient Egyptian civilization . see temples and tombs dates back to 1500 B.C. Enjoy your tour to Luxor with your qualified Egyptologist guide and air conditioned transfer .Visit the valley of the Kings, Temple of queen Hatshepsut, Colossi of Memnon and Karnak temple.

Recognize to the ancient Egyptian civilization . see temples and tombs dates back to 1500 B.C. Enjoy your tour to Luxor with your qualified Egyptologist guide and air conditioned transfer .Visit the valley of the Kings, Temple of queen Hatshepsut, Colossi of Memnon and Karnak temple.

will pick you up from your hotel in Marsa Alam to start your interesting tour by air conditioned vehicle and driving for about 4 hours to visit the east bank where the impressive Karnak temple which dedicated to the triad of Thebes ( ancient name of Luxor ) To God Amun Ra , his wife goddess Mut and their son god Khunsu god of the moon . This temple was built by several Kings as a kind of offering to God Amun Ra the main god at that time , so the temple is complicated on its plan .At the temple you will see the majesty of the ancient Egyptians throughout erecting the Hypostyle Hall which contains 134 columns arranged in rows.

moving towards the west bank which called the city of the dead where the ancient Egyptians built their tombs.

The next stop will be at Colossi of Memnon , the two huge statues of King Amenhotep III and taking some lovely pictures.

Then transfer back to your hotel in Marsa Alam

Confirmation will be received at time of booking.
Not wheelchair accessible.
Passport name, number, expiry and country is required at time of booking for all participants.
A current valid passport is required on the day of travel.
This tour/activity will have a maximum of 8 travelers.
Face masks required for travelers in public areas.
Face masks required for guides in public areas.
Hand sanitizer available to travelers and staff.
Social distancing enforced throughout experience.
Regularly sanitized high-traffic areas.
Transportation vehicles regularly sanitized.
Guides required to regularly wash hands.
We will handle your tour in a small group, 2 person in a small car or maximum 6 person in a van.