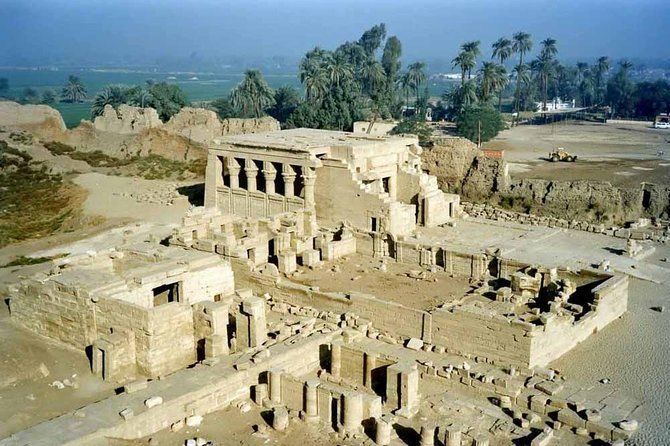 Enjoy Half Day Tour to Dendera Temple from Luxor. Drive for about 70km to the north of Luxor to visit Dendera Temple complex, which contains a large number of structures from different periods of Egyptian history, the best preserved is the Greco-Roman temple of Hathor, then transfer back to your hotel in Luxor

Enjoy Half Day Tour to Dendera Temple from Luxor. Drive for about 70km to the north of Luxor to visit Dendera Temple complex, which contains a large number of structures from different periods of Egyptian history, the best preserved is the Greco-Roman temple of Hathor, then transfer back to your hotel in Luxor

Your Nile Holiday tour guide will pick you up from your hotel in Luxor to discover the ancient site of Dendera. The temple was dedicated to the goddess Hathor, goddess of love, happiness and joy. Dendera is located about 75 km North of Luxor on the west bank of the Nile, opposite modern town of Qena.

The Temple complex was surrounded by a massive mud-brick wall covers an enormous 40,000 square meters. The temple construction dates back to the Middle Kingdom, time of pharaoh Pepi I (ca. 2250 BC) built on this site and continuing right up until the time of the Roman emperor Trajan (ca.117AD). The existing structure began construction in the late Ptolemaic period at the time of Ptolemy Auletes (ac. 54 BC) and the hypostyle hall was built in the Roman period under Tiberius (ac 14 – 37 AD.).
Temple of Hathor at Dendera is also one of the few Egyptian temples with an intact astronomical ceiling and accessible rooftop, where you can get fantastic views of the surrounding countryside.
The ceiling of the Temple of Hathor at Dendera has recently been cleaned, removing hundreds of years of black soot without harming the ancient paint underneath.
See the famous Dendera zodiac carved in Egyptian bas-relief from the ceiling of the Portico. After finished, transfer back to your hotel in Luxor.

Confirmation will be received at time of booking.
All Travelers: Passports photocopies are required at time of booking.
Not wheelchair accessible.
Most travelers can participate.
Hundreds of speed bump roads make slow drive through many villages/towns.
This is a private tour/activity. Only your group will participate.
Face masks required for travelers in public areas.
Hand sanitizer available to travelers and staff.
Social distancing enforced throughout experience.
Regularly sanitized high-traffic areas.
Gear/equipment sanitized between use.
Transportation vehicles regularly sanitized.
Guides required to regularly wash hands.
Contactless payments for gratuities and add-ons

The guide and driver turned up on time, and were helpful and polite. Our guide (Hosne) was very friendly, and knowledgeable about his subject ... and very patient with all our questions and photo taking; we learned a great deal. Our driver drove well, and the car was clean and comfortable. A great day trip, and I would certain use again.

When you're in Luxor, you must take this trip to Dendera! One of the most intact Egyptian monuments and the wall and ceiling decorations here are awesome! I got my own guide and driver so I had a great and if you love history this is it!