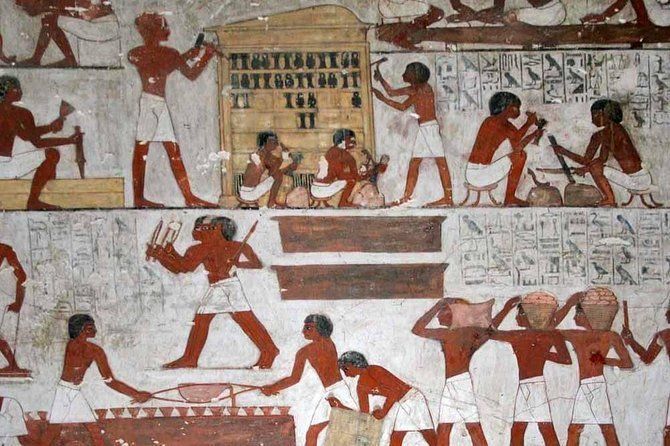 Tour to Ramesseum, Habu Temples, and the Valley of the Nobles

Spend five hours on a professionally guided tour through Egypt's past as you visit the Ramesseum temple, Habu temple, as well as the Valley of the Nobles. This private tour includes pickup and drop off, entry fees, water, snacks and a Qualified Egyptologist tour guide services

Spend five hours on a professionally guided tour through Egypt's past as you visit the Ramesseum temple, Habu temple, as well as the Valley of the Nobles. This private tour includes pickup and drop off, entry fees, water, snacks and a Qualified Egyptologist tour guide services

Tour to Ramesseum, Habu Temples, and the Valley of the Nobles

Stop At: Valley of the Nobles, West Bank near Ramesseum Gurna, Luxor Egypt

Your local Egyptologist tour guide will pick you up from your Luxor Hotel / Nile Cruise and then start to visit the Theban necropolis in Luxor west bank of the River Nile.
Start at the Valley of the Nobles, where the ancient Egypt’s nobles tombs and high officials were scattered through the rocky hills on the West Bank of Luxor at el Qurna hills, the majority of the tombs dating to the Golden Age of Thebes during the New Kingdom (1550 – 1080BC). The Nobles tombs are decorated with daily live scenes, funerals, and ideal afterlives of their owners. These tombs provide us with a wealth of information about life and religious beliefs in ancient Egypt. Their beauty also attests to the skill and creativity of the ancient Egyptian artisans

Proceed to visit the Ramesseum, the memorial temple of King Ramses II. The Ramesseum temple is famous for its 19 metre (62 feet) high seated statue and weighing more than 1000 tons of Ramses II (of which only fragments are left), that the poet Percy Bysshe Shelley penned his sonnet "Ozymandias". The walls of the Ramesseum temple, which is only about half preserved, are decorated with reliefs, including scenes depicting the Battle of Kadesh, the Syrian wars, and the Festival of Amon Min.

Move on to Madinat Habu Temple of king Ramses III. The Temple is the best-preserved of the New Kingdom memorial temples. It is decorated with military scenes and texts illustrating the victories of the king in three wars, as well as the rituals performed and festivals celebrated. A royal palace was built at the south of the Temple open forecourt, while priests’ dwellings and administrative units lay on either side of the temple.

After finished, you will be transferred back to your Hotel or Nile Cruise in Luxor.

Confirmation will be received at time of booking.
Not wheelchair accessible.
Travelers should have a moderate physical fitness level.
This is a private tour/activity. Only your group will participate.
Face masks required for travelers in public areas.
Hand sanitizer available to travelers and staff.
Social distancing enforced throughout experience.
Regularly sanitized high-traffic areas.
Gear/equipment sanitized between use.
Transportation vehicles regularly sanitized.
Guides required to regularly wash hands.
Contactless payments for gratuities and add-ons

Our tour guide Mahmoud and driver Chesley were wonderful. Mahmoud was through in explaining each site. We accessed the West Bank of the Nile River, by crossing the recent bridge built in 1992 to get to the Valley of the Nobles. There we saw the Colossi of Menon for which we were told the nile River use to reach the entrance. The two statues were colossal and were bigger than human life could conceive, similar to how the Kings perceived themselves at that time. As we continued our journey we reached the tomb of Nakht and Menna. who lived during the 18th Dynasty. As a noble person, Mean was responsible for surveying the fields and recording the inventory of the harvest. Mahmoud was detailed in his explanation making sure that we had an understanding of what we were seeing. But was was more amazing was the art work and literature that was on the wall as a result of the drawings and documentation of the ancient Egyptians. No story book can describe it to you, you must come and witness it for yourself. As you stand in the Valley of the Nobles, which is dry and desert land and look our towards the nile you see the lushness of the land before you. Where the Nile becomes the source for which the farmland can be cultivated. This tour is amazing and it would require so much more space to capture all that we saw and felt, but need less to say Habu Temple and Rameseeum Temple were just as amazing and our tour guide Mahmoud was top-notch!!! Just be prepared if you travel in the Summer, the weather is HOT!!!

WOW this was a very informational trip if you get the right guide that explains how things worked back in the old times and points out a-lot as you go. The pace was really good, our driver was good and I felt very safe!