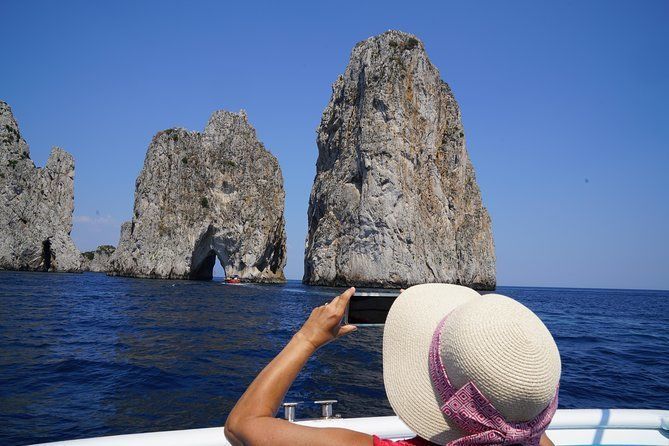 Join this full-day excursion and don’t miss the chance of visiting the enchanting Island of Capri in one day! Admire the amazing views that it has to offer it won't fail to impress you!

Join this full-day excursion and don’t miss the chance of visiting the enchanting Island of Capri in one day! Admire the amazing views that it has to offer it won't fail to impress you!

Marina Grande is the main port of the island of Capri in Italy, to the north of the main town of Capri and at the foot of Mount Solaro.

The heart of Capri, this small square offers far-reaching views as well as a number of cafes & bars.

Pass By: I Faraglioni, End of Via Tragara, Capri, Island of Capri Italy

In Italian, Faraglioni are stacks, a coastal and oceanic rock formation eroded by waves. The word may be derived from the Greek pháros or Latin pharus ("lighthouse") and is cognate with the Spanish farallón.

Punta Carena Lighthouse is an active lighthouse, located on the island of Capri on the head of the same name, about 3 kilometres (1.9 mi) southwest of Anacapri.
The lighthouse has been active since 1867; its construction began in 1862.

Casa Malaparte (also Villa Malaparte) is a house on Punta Massullo, on the eastern side of the isle of Capri, Italy. It is one of the best examples of Italian modern and contemporary architecture.

The house was conceived around 1937 by the well-known Italian architect Adalberto Libera for Curzio Malaparte. Malaparte actually rejected Libera's design and built the home himself with the help of Adolfo Amitrano, a local stonemason.

Confirmation will be received at time of booking.
Travelers should have a moderate physical fitness level.
May be operated by a multilingual guide.
This experience requires good weather. If it’s canceled due to poor weather, you’ll be offered a different date or a full refund.
This tour/activity will have a maximum of 50 travelers

I should have trusted the reviews I seen, basically the tour give you a ferry ticket to Carpi, transfer to a bus to Anacapri, besides paying 12 euro to take the cable car, you have nothing else to do except take a coffee. When time up, we got transferred to another bus back to Carpi, the agent selling us to pay 18 euro for a boat trip, or else we will have to hang around at Capi, without any interesting point, but restaurants. Our initial intention is to visit Blue Grotto, but was told it’s close. It is disappointing, right away it defeated the purpose of joining this tour. What a waste money and time 😡😡😡

I wouldn't change anything about this excursion! Teodoro, our captain, did a phenomenal job taking us around Ischia and Procida! He is extremely nice and easy going and was very knowledgeable about both island's histories. What he didn't know, he didn't try to fudge.
Pros:
Procida is a charming and colorful island with a predominantly working class demographic. There's no pretense, but a rather realness. The restaurants and cafes were simple in décor, but what they lack in presentation, they more than make up for in hospitality and fantastic cuisine!
There are many inclines, so be prepared for a strenuous walk and a great workout!

Ischia is where I want to have my next holiday! It's a massive volcanic island that hosts 6 towns, Aragonese Castle, the beautiful Maronti beach, and the thermal baths! Sadly, I didn't get to try the thermal baths, but on the upside, I did get to view the castle. And it is marvelous! Ischia resembles a Greek island, but has it's unique charm and much Italian flair! If Teodoro is your captain, then rest assured that you are in the best of hands!
P.S. Make certain to swim around each time he stops for some snorkel time. You won't see many fish, but you will enjoy the water temperature and balanced sea salt content. Your eyes won't burn when you submerge yourself in the sea.

Guided tour of Herculaneum - half day tour (5 hrs) from Sorrento

From Sorrento: Guided Kayak Tour in the Bay of Ieranto