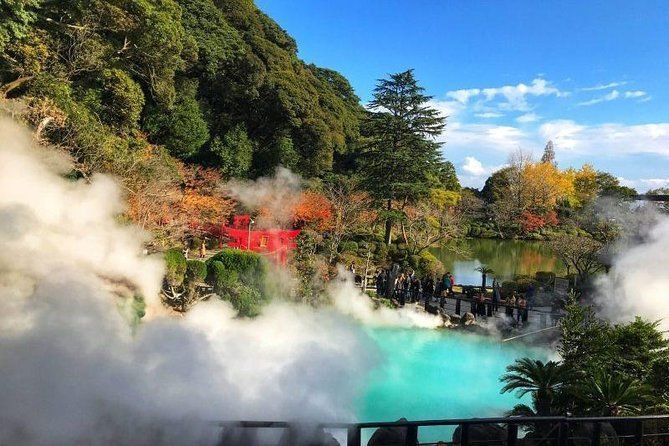 This value-packed trip with a nationally-licensed and experienced multilingual tour guide is a fantastic and efficient way to explore Beppu!

Beppu is famous as a hot spring resort, the point clearly seen in the hot steam rising from vents in the earth. Onsens being the main point of attraction to the area, there are several ways to enjoy them. Along with the traditional way of bathing, some hot springs are just for viewing, as their beauty can be very charming. In addition, boiled eggs and pudding cooked using the high temperature steam are also popular.

Let us know what you would like to experience and we will customize a four-hour tour that's best for you!

Note*1: Please select your must-see spots from a list in the tour information to create your customized itinerary.
Note*2: The Nationally-licensed Tour Guide-Interpreter certification is issued by the Japanese government requires a good knowledge and understanding of Japanese culture and history.

This value-packed trip with a nationally-licensed and experienced multilingual tour guide is a fantastic and efficient way to explore Beppu!

Beppu is famous as a hot spring resort, the point clearly seen in the hot steam rising from vents in the earth. Onsens being the main point of attraction to the area, there are several ways to enjoy them. Along with the traditional way of bathing, some hot springs are just for viewing, as their beauty can be very charming. In addition, boiled eggs and pudding cooked using the high temperature steam are also popular.

Let us know what you would like to experience and we will customize a four-hour tour that's best for you!

Note*1: Please select your must-see spots from a list in the tour information to create your customized itinerary.
Note*2: The Nationally-licensed Tour Guide-Interpreter certification is issued by the Japanese government requires a good knowledge and understanding of Japanese culture and history.

Beppu is one of the most famous hot spring resorts in Japan. The city is blessed by as many as eight different springs, named Beppu Onsen, Kannawa Onsen, Myoban Onsen, Kankaiji Onsen, Hamawaki Onsen, Kamegawa Onsen, Horita Onsen and Shibaseki Onsen, each featuring public baths and ryokan with bathing facilities. Together they produce more hot spring water than any other onsen resort in the country.

What sets Beppu apart from other onsen resorts is not only its abundance of thermal waters, but also the wide range of bath types that can be enjoyed there. Aside from conventional hot water baths, Beppu offers sand baths where bathers are buried in naturally heated sand, steam baths that are heated by the steam of a hot spring, and mud baths which are basically muddy hot water baths.

Beppu's hot springs generate not only abundant amounts of water but also a lot of steam that can be seen blowing out here and there across the city. For centuries, people have been harnessing the naturally hot steam for cooking food. The resulting dishes are called "Hell Steam Cuisine" and are simple and healthy due to the gentle, additive-free cooking method. The naturally mineral-laden steam is also said to bring out the true flavors of the food.

Tourists have the opportunity to steam their own meals at the Jigokumushi Kobo Steam Cooking Center (地獄蒸し工房鉄輪, Jigokumushi Kōbō Kannawa) near the hells of the Kannawa District. Staffed by volunteers, the center is a mix between restaurant and public kitchen with rows of steam chambers that can be rented to cook food in.

The "hells" (地獄, jigoku) of Beppu are seven spectacular hot springs for viewing rather than bathing. They are presented to visitors in a rather touristy fashion, which might not appeal to everybody. Five of the hells are located in the Kannawa district and two in the more remote Shibaseki district.

One of the more beautiful hells, the "sea hell" features a pond of boiling, blue water. In its spacious gardens, there are a few smaller, orange colored hells and a clear water pond with lotus flowers whose large leaves are strong enough to carry small children.

This hell is named after the mud bubbles, which emerge from boiling mud pools and look like the shaven heads of monks. There is also a foot bath with clear water. Adjacent to the hell is a public bath with multiple pools that costs an additional 620 yen.

True to its name, the "white pond hell" features a pond of hot, milky water. The pond is surrounded by a nice garden and a small, run-down aquarium that has seen better days.

The "cooking pot hell" features several boiling ponds and a flashy demon statue as cook. On the grounds, visitors can drink the hot spring water, enjoy hand and foot baths, inhale the hot spring steam and try various snacks cooked or steamed by the hot spring.

A large number of crocodiles are bred and kept on the grounds of the "monster mountain hell".

The "blood pond hell" features a pond of hot, red water and a large souvenir shop. It is one of the more photogenic hells.

The "spout hell" features a boiling hot geyser, which erupts every 30-40 minutes for about 6-10 minutes. A stone plate above the geyser hinders it to reach its full height. A short walking trail leads up the forested slope in the back of the hell grounds.

Mount Tsurumi (鶴見岳, Tsurumidake) is a 1375 meter high mountain that overlooks Beppu. The mountain is accessible via the Beppu Ropeway which takes visitors nearly 800 meters up the steep slopes to a small park near the summit. The park offers multiple observation decks with panoramic views of Beppu and Oita City, Mount Yufu and as far as the Kuju Mountains when visibility is good.

The small park is covered by a network of walking paths that lead to the various nearby viewpoints. The actual summit of Mount Tsurumi can be reached in a 15 minute walk from the upper ropeway station. More demanding hiking trails connect Mount Tsurumi to the surrounding mountain peaks. It is also possible to bypass the ropeway and climb up the entire mountain in about two hours via a hiking trail that starts at the lower ropeway station.

Takasakiyama Monkey Park (高崎山自然動物園, Takasakiyama Shizen Dōbutsuen) is a popular monkey reserve at the base of Mount Takasaki, a 628 meter high mountain along the coast between Beppu and Oita City. The mountain is home to some 1500 wild Japanese macaques that roam freely around its steep, forested slopes. Park visitors can get close to the monkeys as they are fed, and watch them as they run around, play or just sit in the sun and groom each other.

Mount Takasaki's monkeys are divided into two separate troops of approximately 700 to 800 individuals each, making them some of the world's largest monkey troops. The troops take turns coming down to the monkey park, one in the morning and one in the afternoon. During their stay at the park, the monkeys get fed by the wardens and spend their time playing and resting while appearing almost oblivious to the human visitors. However, although they seem tame, the monkeys should not be touched or fed, and eye contact should be avoided.

The Oita Prefectural Art Museum (OPAM, 大分県立美術館, Ōita Kenritsu Bijutsukan) is an art museum located about 30 minutes away from central Beppu in downtown Oita City. Not to be mistaken with the nearby Oita City Museum, the Oita Prefectural Art Museum was opened in April 2015 in an eye-catching building designed by Japanese architect Ban Shigeru, who is known for his innovative designs that often incorporate structural elements made of cardboard and paper.

The exterior of the building is encased in a wooden facade which resembles woven bamboo handicrafts, and features large glass walls that fold up, blending the indoor and outdoor spaces of the museum. Upon entering the building, visitors are greeted by a large atrium featuring a museum shop and space for large art installations besides the ticket counter.

Beppu is known for its quirky attractions and one of these is the sand baths that you can try all over town.

One of the best places to have a sand bath however is at Shoningahama Beach which is a place on the coast where the sand is heated by the spring waters which bubble beneath the surface.

People flock here to be buried up to their necks in the sand, and this is said to have thermal properties which make the body more relaxed and soothe aches and pains.

As well as its famous hells, Beppu is also known as an onsen town which features traditional Japanese bath houses.

Many people choose to visit these to wash the sand off after a sand bath, and one of the most famous is Takegawara Onsen which offers both the sand and the onsen experience at the same venue.

Note however that the water here is very hot but that it is also said to be good for curing all manner of aches and pains.

Beppu Park is located in the center of the city and is known for being reminiscent in style of parks in Tokyo and Kyoto.

This is a nice strip of greenery in the city, and if you happen to be here in the spring time then you can walk around and check out the fluffy pink cherry blossom trees in full bloom.

The park is also a riot of color in the fall season when you can check out the burnt copper autumn leaves.