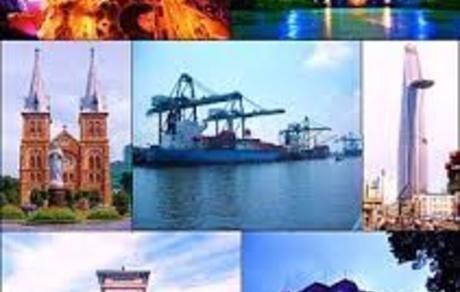 If you have visited a number of cities in Vietnam but forgot Ho Chi Minh City, you have not known much about Vietnam for real. It is considered the capital of the Southern area of Vietnam. It is located near the Mekong delta, about 1,760 kilometers south of Hanoi, the capital of Vietnam. Ho Chi Minh City is the largest city in Vietnam with the population of 7 million in the area of 2095 square kilometers (908 square miles). Ho Chi Minh City is the second heart and soul of Vietnam, to Hanoi. It's a bustling, dynamic and industrious center, the largest city in the country, the economic capital and the cultural trendsetter. Yet within the teeming metropolis are the timeless traditions and beauty of an ancient culture.

Ho Chi Minh City (abbreviation HCMC), commonly known as Saigon is the largest city in Vietnam and the former capital of the Republic of Vietnam. The city used to be a small fishing village, inhabited by Khmer people, Cambodia before becoming a land under Nguyen dynasty rule in 1698, being conquered by France from 1950 to 1975. Throughout its long history, HCMC appears to be not only a modern and dynamic city but a cultural and historical one as well.
Following the Fall of Saigon in 1975, Saigon was renamed Ho Chi Minh City. Nevertheless, the old Saigon moniker is still used by both Vietnamese and foreigners.

You are going to visit Sai Gon? The best time to visit weather-wise is the dry season between December and April, when the humidity is more manageable. The clouds start getting heavy around November and stay through March. The Tet Festival in late January or early February is an exciting, if extremely hectic, time to visit. Being only 10.5° above the equator and between 5 and 10m (16-35ft) above sea level, Ho Chi Minh City is almost a template for tropical weather. Temperatures rarely vary from about 30°C (86°F).

Exploring deeply inside Sai Gon, tourists may be surprised at the diversity of ethnic minorities in the magnificent city and its surroundings. Apart from Kinh (or Viet) people, there are a number of others, for example, Chinese, (the largest Chinese community in Vietnam), Khmer, Cham, Nung, and Rhade, etc. Each of them has their own cultural characteristics, languages, costumes, lifestyles, and religions such as: Buddhism, Taoism, Confucianism, Ancestor Worship, Roman Catholic, Protestant, Cao Dai, Hoa Hao, Islam, Hinduism, and Bahá'í Faith. Yet, the vast majority is Kinh people, whose common characteristic is to be friendly, hospitable, open-hearted, and straightforward.

These days, lots of Sai Gon’s youngsters and youths could speak English fairly well. They are more and more fond of communicating with foreigners in English for practice. More importantly, they are helpful, which fully reassure first-time foreign visitors to this city.

HCMC, as known, is now growing up to be an industrious, modern and dynamic city, with a lot of new modern constructions of Western architecture. However, here and there you can still see ancient monuments such as Notre Dame Cathedral, Thien Hau Pagoda, Phung Son Tu Pagoda, etc., making it a special picture of “an integrated rather than dissolved city”. HCMC is called "the Pearl of the Far East" or "Paris in the Orient" thanks to this special fascinating beauty, capable to have most travellers lengthen their stay.

Being a city embracing both traditional and modern beauty, HCMC is an ideal destination of interest for every generations with different characters.

You are young, active and playful? There are uncountable places of entertainment for you in this fast-growing dynamic city. Dam Sen Water Parkis worth your try. Opened in 1999 with new water slides added each year, this water park offers some truly unique water slide experiences (including the amazing "Space Bowl")! Or you may like to watch films? Galaxy cinema with up-to-date films on big screen would be your premium choice. Though not as huge as that in some other countries, it is one amongst the top places of entertainment in Ho Chi Minh City these days.

If you prefer places of religion and history, here we go! Notre Dame Cathedral (Nhà thờ Đức Bà) is the old architectural monument, which is much enchanting. Incense Thien Hau Pagoda is dedicated to Lady Thien Hau, the sea goddess, who left two giant turtles to keep an eye on things in her absence. A festival is held in her honor on the 23rd day of the March lunar month. Don't miss the gorgeous sculptures in the walls of the courtyard outside the temple! Quan Am Pagoda, the oldest pagoda in town, and Phung Son Tu Pagoda, which is dedicated to the God of happiness and virtue. The pagoda itself is dusty and dwarfed by high-rises under construction nearby, but the small, sculpted grounds are a good place for a rest from the hectic city. Besides, you should also visit some premium museums of the city, such as the Ho Chi Minh City Museum, Museum of Vietnamese History, and Revolutionary Museum and the War Remnants Museum.

Further more, HCMC is a city that churns, ferments, bubbles and fumes. The streets are a jumble of street markets, shops, pavement cafes, stands-on-wheels and vendors selling wares spread out on sidewalks. It's impossible not to be infected by its exhilarating vibe.

As mentioned, HCMC is now one of the two most significant economic centre of Vietnam. Around 300,000 enterprises are trading in high-tech, electronics, processing and light industries, in construction, building materials and agro-products on a whole. Further foreign investment is now pouring into the city. Month by month, year by year, buildings, construction of entertainment, tourism, and companies come up. Higher education in Ho Chi Minh City is much concentrated, with about 76 universities and colleges and a total of over 380,000 students. The health care system of the city is relatively improved with a chain of about 100 public-owned hospitals or medical centers and dozens of private-owned clinics. Transportation is more and more convenient with four means of transport system: airlines, rail, road and marine. What is more, mass media is day by day fast developing. It is also the home of hundreds cinemas and theatres, parks, and luxury and standard hotels. Well, what can you see from this much-to-say view? I can only see rapid growth and great economic as well as tourism potential!