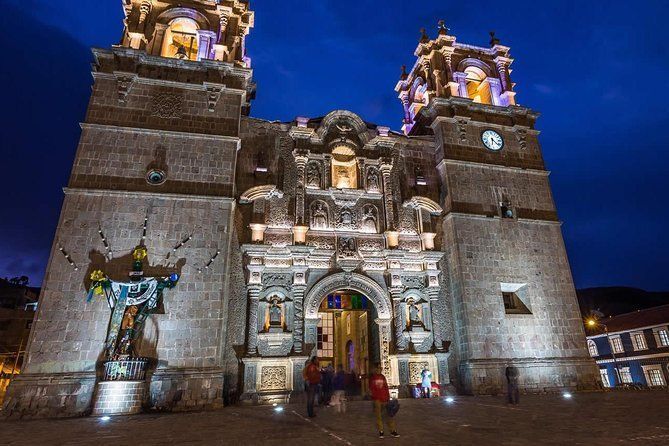 Walking Tours Puno a new way to discover Puno in order to promote the attractions of the city.

Walking Tours Puno a new way to discover Puno in order to promote the attractions of the city.

You can enjoy the following tourist attractions:

Huajsapata Lookout:  Huajsapata means "witness of my love". Located in the west area of the city on a high and natural place of privileged panoramic view of the city of Puno and the Lake Titicaca. At the top, there is a monument to Manco Capac, founder of the Inca Empire.

Cathedral of Puno: Built in the seventeenth century and with the rank of Minor Basilica. The facade was sculpted Simon de Asto. The Cathedral of Puno was built on the Fence of the Devil. Was completed on 25 May 1757 and is a sample of the Spanish baroque style that includes Andean elements that give the monument a mestizo character.

Carlos Dreyer Museum (optional – a payment of 15 soles must to be done and if group is agree we can enter to visit): Is located in the Plaza de Armas of Puno. Founded by the German Carlos Dreyer, this collection has an interesting art gallery and pre-Columbian objects such as jewelry, ceramics, textiles and lithic pieces of the pre-hispanic period. Is also retained a collection of studies and several documents on the foundation of the city. Next is the House of the Corregidor.

The Balcony of the Conde de Lemos: takes this name in allusion to the viceroy of the same name that upon his arrival to Puno in 1668 stayed in this House. It is said that the Viceroy would have come to the altiplano to quell the rebellion of the brothers Salcedo and found the city of Puno.

The Corregidor House: The Corregidor was a Spanish authority until 1782, charged with administering justice, put taxes, sort and defend the city. The house was built by the Cure of Wild Valdés, the same that was responsible for the construction of the Cathedral after the visit of the Conde de Lemos to Puno in 1668.

Arco Deustua: Located 3 blocks from the main street in Puno, is this monument built in honor to the Peruvians who fought in the battle of Junin and Ayacucho. Built in 1846 has two roundabouts at the sides. This monument has a lot of historical value - moral.

Pino Park: Located in the center of the city of Puno, in the center there is a monument to Dr Manuel Pino, hero of the war with Chile, was built in 1901.

Central Market: Visit our local market in the night, discover what locals eat, buy and take a look on this small and traditional market in Puno

Confirmation will be received at time of booking.
Not recommended for travelers with back problems.
Not wheelchair accessible.
May be operated by a multi-lingual guide.
This tour/activity will have a maximum of 15 travelers