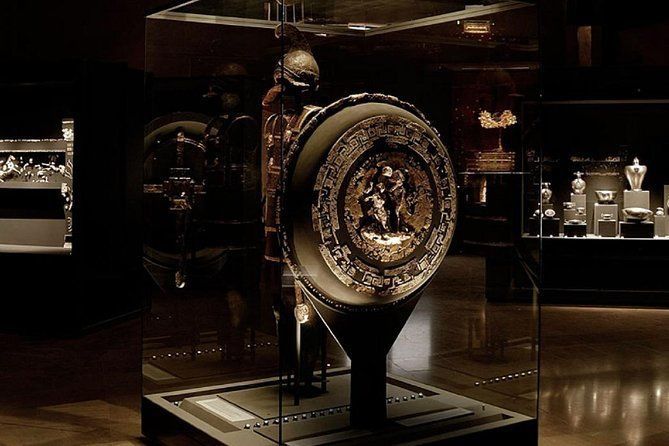 In this Vergina Private Tour you will visit an Unesco Heritage Site and burial site of Philip II, father of Alexander the Great.

In this Vergina Private Tour you will visit an Unesco Heritage Site and burial site of Philip II, father of Alexander the Great.

We take the ferry from Corfu and reach Igoumenitsa (trip duration 1.5 – 2 hours). Upon arrival we drive to Vergina.

Vergina, a modern village, was the first capital of ancient kingdom of Macedonia, called Aigai.

Vergina one of the most important archaeological discoveries of the 20th century in Greece. The site of the Royal Tombs under a modern roof hosts the main excavation, as well as an exhibition of the major finds from the burials. It is protected by UNESCO as world cultural heritage and comprises a unique discovery of an enormous universal impact.

The exhibition’s shelter has the external form of the Great Tumulus, a man-made mound, while the underground building has been housing since November 1997 tombs and treasures found in them. This sheltered group includes three Macedonian tombs: the intact tomb of Philip II (II) with a hunting scene fresco painting. Intact is also the so-called Tomb of the Prince (III), which may belong to Alexander IV, grandson of Philip II and his son Alexander the Great and another ruined and plundered Macedonian tomb (IV) of the third BC century.

The visitor will also see a plundered a cist family tomb (I), known as the “Tomb of Persephone”, with the incomparable fresco of the abduction of Persephone by Hades and a ruined building named “Heroon”, probably used for the worship of the dead royal members buried next door.

After our visit to the archeological site and before our Vergina Private Tour comes to an end, we have free time in the village for shopping and lunch (not included in the price)

At 15.30 drive back to Igoumenitsa to catch our ferry to Corfu.

Confirmation will be received at time of booking.
Wheelchair accessible.
Stroller accessible.
Near public transportation.
Infant seats available.
Transportation is wheelchair accessible.
Most travelers can participate.
This experience requires good weather. If it’s canceled due to poor weather, you’ll be offered a different date or a full refund.
This is a private tour/activity. Only your group will participate.
Face masks required for travelers in public areas.
Face masks required for guides in public areas