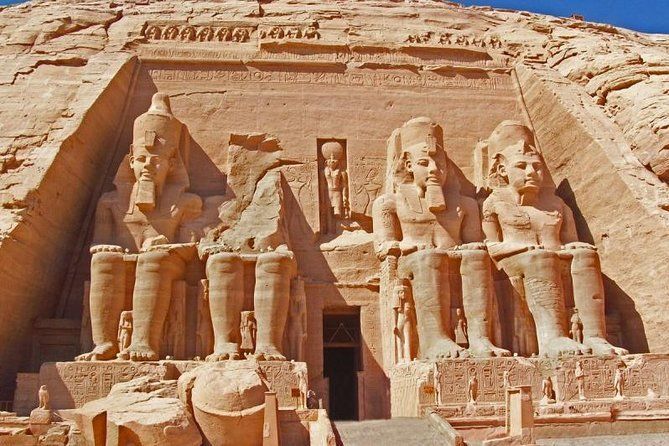 Explore the Great Temple of Ramesses II and the Small Temple of Nefertari on a 9-hour sightseeing tour from Aswan. Learn about the Egyptian pharaohs and their burial rites and traditions.

Explore the Great Temple of Ramesses II and the Small Temple of Nefertari on a 9-hour sightseeing tour from Aswan. Learn about the Egyptian pharaohs and their burial rites and traditions.

You will be picked us from Marsa alam hotel to Aswan by Private vehicle ,It takes 4 hours driving. You will visit the High dam,Phiala temple and the Unfinshed obelisk and Enjoy sailing on the Nile with Egyptians Felucca.overnight in Pyramisa Isis le Cornische 4 stars hotel. Travel back to the days of Ancient Egypt and the Nubian Pharaoh Ramesses II on a full-day tour of the temples he built for himself and his consort, Queen Nefertari.

Built to honor the goddess Isis, this was the last temple built in the classical Egyptian style. Construction began around 690 BC, and it was one of the last outposts where the goddess was worshipped.

Aswan High Dam is a rock-fill dam located at the northern border between Egypt and Sudan. The dam is fed by the River Nile and the reservoir forms Lake Nasser. Construction for the project began in 1960 and was completed in 1968. It was officially inaugurated in 1971.

Aswan was the source of ancient Egypt’s the finest granite used to make statues and embellish temples, pyramids, and obelisks.

The large unfinished obelisk in the Northern Quarries has provided valuable insight into how these monuments were created, although the full construction process is still not entirely clear. Three sides of the shaft, nearly 42m long, were completed except for the inscriptions. At 1168 tonnes, the completed obelisk would have been the single heaviest piece of stone the Egyptians ever fashioned.

Day 2-Aswan-Abu Simbel- Marsaalam
An early pick-up from your hotel in Aswan at 04: 00, travel by air-conditioned vehicle from Aswan to Abu Simbel, It takes 3 hours driving to the temples of Abu Simbel before the heat of the day.
The two temples were Carved out of the mountainside during the reign of Pharaoh Ramesses II in the 13th century BC,

Upon arrival, an Egyptologist guide will tell you all about one of the greatest and most whimsical pharaohs in Egyptian history. Marvel at the main façade of the Great Temple to Ramesses II and its 4 statues of the pharaoh seated on his throne following his advancing age.
Continue to the smaller temple of Ramesses' consort, Queen Nefertari, situated right next to the Great Temple. Admire the impressive rock-cut façade depicting the pharaoh and his queen. Re-board the coach at 09:00 for the return transfer to Aswan before, Lunch will be served in Aswan before your drive back to Marsaalam

Confirmation will be received at time of booking.
Wheelchair accessible.
Private day trip to Aswan en Abu simbel from Marsa alam.
Not recommended for travelers with back problems.
Not recommended for pregnant travelers.
No heart problems or other serious medical conditions.
Most travelers can participate.
This is a private tour/activity. Only your group will participate.
Face masks required for travelers in public areas.
Face masks required for guides in public areas.
Face masks provided for travelers.
Hand sanitizer available to travelers and staff.
Social distancing enforced throughout experience.
Regularly sanitized high-traffic areas.
Gear/equipment sanitized between use.
Transportation vehicles regularly sanitized.
Guides required to regularly wash hands.
Regular temperature checks for staff.
Temperature checks for travelers upon arrival.
Paid stay-at-home policy for staff with symptoms.
Contactless payments for gratuities and add-ons