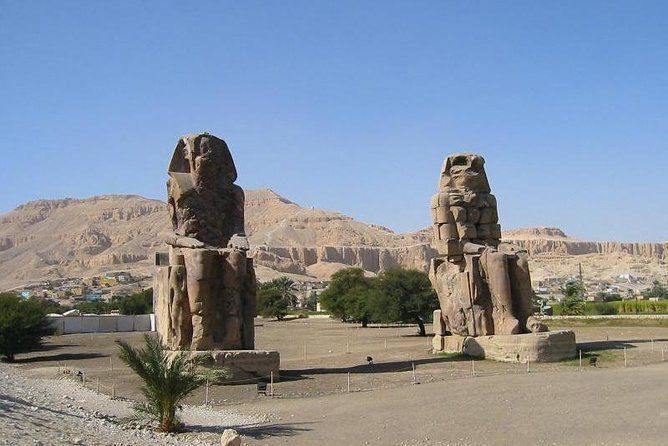 Tour of Ancient Thebes from Port Safaga to Luxor

Enter Egypt from Port Sagafa to visit the temples and tombs of the greatest kings and queens who ruled Egypt from Luxor, the capital of ancient Egypt. See the Temple of Karnak, the largest religious structure ever built.

Enter Egypt from Port Sagafa to visit the temples and tombs of the greatest kings and queens who ruled Egypt from Luxor, the capital of ancient Egypt. See the Temple of Karnak, the largest religious structure ever built.

Tour of Ancient Thebes from Port Safaga to Luxor

Your tour guide will pick you up from the outer gate of the Port of Safaga. Your guide will have a sign with your name on it. Start your tour to the ancient city of Thebes (Luxor). This one-day tour departs privately from Port Safaga. You will ride in an air-conditioned van accompanied by an Egyptologist guide, riding through the Eastern desert for around 2.5 hours to reach Luxor.

The tour of Luxor begins as you cross over to the West Bank to visit the Valley of Kings where, for a period of nearly 500 years from the 16th to 11th century BC, amazing tombs were constructed for the Pharaohs and powerful nobles of the New Kingdom of Egypt. The valley is known to contain 63 tombs and chambers ranging in size from a simple pit to a complex tomb with over 120 chambers. You will visit 3 Tombs and then the Temple of Queen Hatshepsut. Widely considered one of the "incomparable monuments of ancient Egypt," the Mortuary Temple of Queen Hatshepsut is located beneath the cliffs at Deir el Bahari on the west bank of the Nile near the Valley of the Kings.

On the way back to the East Bank, visit the Colossi of Memnon and the Alabaster Institute. The Colossi of Memnon are two massive stone statues of Pharaoh Amenhotep III. For the past 3400 years they have stood in the Theban necropolis, across the River Nile from the modern city of Luxor. The 2 massive structures always leave guests asking tour guides the same question - how did they do it?

Travel back to the East Bank by felucca to freshen up and enjoy lunch. After lunch make your way to the amazing Temple of Karnak. The temple was known as Ipet-isut (most select of places) by ancient Egyptians.This city of temples was built over 2000 years ago and dedicated to the Theben triad of Amun, Mut and Khonsu. This derelict place is still capable of overshadowing many of the wonders of the modern world, and in its day must have been awe inspiring. The temple covers about 200 acres. The area of the sacred enclosure of Amun alone is 61 acres, and would hold ten average-sized European cathedrals. Follow this visit up with a trip to a papyrus shop.

After an amazing day in Luxor, you will transfer back to Safaga and return to your cruise.

We has an excellent tour with Ramadan. Small tour and so accommodating. We docked almost an hour late but Ramadan had Whats app ed us the night before so we had a contact and they waited for us. Picked us up at the port and the fun began. The tour is well scheduled, allowing enough time in all the sights without feeling rushed. Ramadan was an excellent guide. VERY knowledgeable giving us great historical information throughout the tour. WE added on the small Nile cruise to the tour which I would highly recommend. Great values and the experience of a lifetime.

Our guide, Ramadan, contacted me at our hotel in Safaga. He was courteous and very efficient. He gave us our pickup time the next morning and the tour coach was right on time. After arriving in Luxor, Ramadan met us at the Temples of Karnack and gave us a brief history of Egypt. He then escorted us on our private tour around the temples, We then went to a papyrus store for demonstrations and possible shopping. He then suggested to break our tour up into 2 days which was an excellent idea as there is a lot of walking in the Valley of the Kings and the Temple of Hatshepsut. We had not checked into our hotel yet, so he took us there and we made plans to meet in the am. The next day, we had our own van and driver. Ramadan spent the day with us in and around Luxor, including both sights mentioned above, a mosque, a short Nile river boat ride and a lunch included. It was a great day!! I asked him about transportation to the airport in the morning and he booked it with his company, The driver and Ramadan showed up very early in the morning 3am---beyond the call of duty, and took us to the airport to help us check in. I would highly recommend Ramadan and El Sahel Travel in Luxor, Egypt. Lynda kuebler,