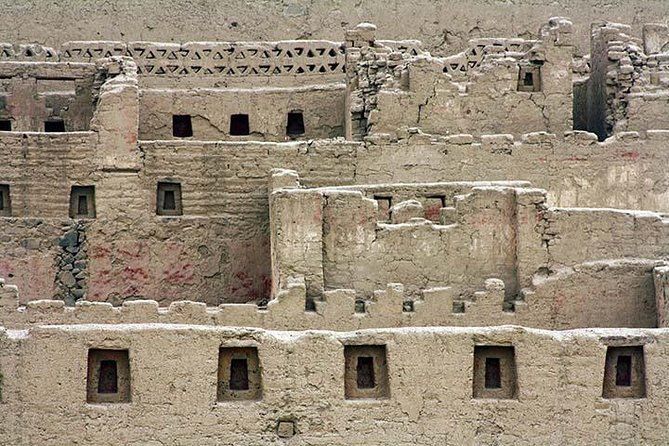 Step back in time on a guided tour of Tambo Colorado, a beautifully preserved Inca fortress featuring the high priest’s chambers complete with sacrificial altar. And this moderate half-day tour showcases the historic Pisco Valley where desert dunes contrast with verdant farming villages where centuries-old irrigation techniques are still employed.

Step back in time on a guided tour of Tambo Colorado, a beautifully preserved Inca fortress featuring the high priest’s chambers complete with sacrificial altar. And this moderate half-day tour showcases the historic Pisco Valley where desert dunes contrast with verdant farming villages where centuries-old irrigation techniques are still employed.

At the designated time, our guide will pick you up from your hotel in  Paracas town. Then will drive towards to Tambo Colorado in private vehicle. This site was an Inca settlement and was most likely built at the end of the 15th century and was ruled by the Inca Emperor Pachacutec. Tambo Colorado was known as Puka Tampu, Pucallacta or Pucahuasi and its buildings are typical Wary (Ayacucho) and Inca (Cusco) culture influences, have buildings of ceremonial plazas, houses, ceremonial platforms and the main building known as La Fortaleza. It is believed that Tambo Colorado  was used as an administrative/ceremonial and military place to control the main road from the coast to the highlands also this place was to service as resting place for the Inca and his army across the Inca territory.

The site consists of several structure around a large central plaza. The central plaza is shaped like a trapezoid with its largest side being 150m long. The main structure are grouped together in a northern and southern Palaces, plus some ceremonial platforms. Because of local environmental conditions, many of the buildings original colors have been preserved, helping experts reconstruct the site.

After your visit you will return to your hotel.

Confirmation will be received at time of booking.
A minimum of 2 people per booking is required.
Not wheelchair accessible.
Near public transportation.
Infants must sit on laps.
Not recommended for travelers with back problems.
Not recommended for pregnant travelers.
No heart problems or other serious medical conditions.
Most travelers can participate.
This is a private tour/activity. Only your group will participate

I wouldn't recommend this tour because of the cost. This place is about 50 mins to an hour from Paracas. There is a little museum at the entrance and ample parking. Perhaps you can just take a hotel car there instead of paying this absurd amount for this tour. As a traveler, you would have experiences where you feel ripped off. This was one of them for me. On the up side, our driver was nice and our guide was fantastic. He entertained us with details of Tambo Colorado and Peru on the way there and back. But again, I do not recommend purchasing this tour.