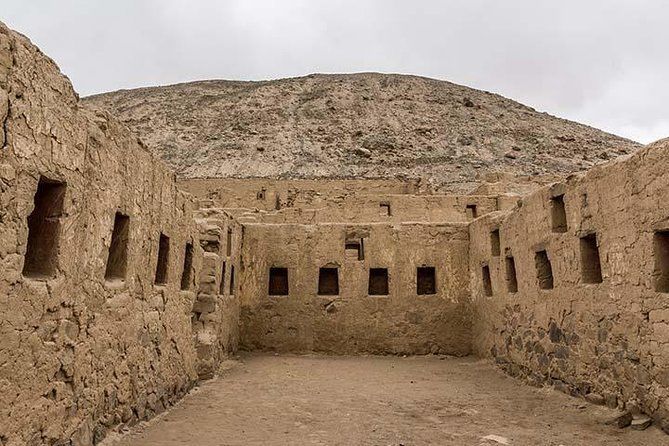 You will be met by our guide at 9:15am at San Martin Port, then you will be transferred to Paracas town, at this point, you will board our shared vehicle to drive towards Pisco town for a sightseeing tour where you will visit the main square, Municipal Palace and among others places of interest. Afterwards we all be travelling east for 35 minutes to finally arrive to the well preserve Inca Fortress of Tambo Colorado. Tambo Colorado was an Inca settlement and was most likely built at the end of the 15th century and was ruled by the Inca Emperor Pachacutec. It was known as Puka Tampu, Pucallacta or Pucahuasi and its buildings are typical Wary (Ayacucho) and Inca (Cusco) culture influences, have buildings of ceremonial plazas, houses, ceremonial platforms and the main building known as La Fortaleza. It is believed that Tambo Colorado was used as an administrative/ceremonial and military place to control the main road from the coast to the highlands also this place was to service as resting place for the Inca and his army across the Inca territory. The site consists of several structure around a large central plaza. The central plaza is shaped like a trapezoid with its largest side being 492-ft (150-m) long. The main structure is grouped together in a northern and southern Palaces, plus some ceremonial platforms. Because of local environmental conditions, many of the buildings original colours have been preserved, helping experts reconstruct the site. Finally, you will return to San Martin Port to re-join your ship.

Confirmation will be received at time of booking.
Not wheelchair accessible.
A minimum of 2 people is required to book this tour.
Printed travel voucher or E-travel voucher along with your passport or any ID its required before boarding (verification purpose only)..
Near public transportation.
Infants must sit on laps.
Not recommended for travelers with back problems.
Not recommended for pregnant travelers.
No heart problems or other serious medical conditions.
Most travelers can participate.
This tour/activity will have a maximum of 15 travelers