On this tour, discover the secrets of Alhambra, save time with skip-the-line access and explore this wonder of Moorish architecture, unique in Europe. Make sure your camera is fully charged and the memory empty as you will have the opportunity to take thousands of pictures of this incredible palace complex and its surrounding gardens. Your guide will let you know everything about the art, culture, history and religion in each of the areas that you will visit. Get ready to forget everything and plunge into the mysteries of this paradise. This tour gives you a tailor-made tour through the Alhambra complex also including the Alcazaba, Generalife Palace and Gardens and the Palace of Charles V.

On this tour, discover the secrets of Alhambra, save time with skip-the-line access and explore this wonder of Moorish architecture, unique in Europe. Make sure your camera is fully charged and the memory empty as you will have the opportunity to take thousands of pictures of this incredible palace complex and its surrounding gardens. Your guide will let you know everything about the art, culture, history and religion in each of the areas that you will visit. Get ready to forget everything and plunge into the mysteries of this paradise. This tour gives you a tailor-made tour through the Alhambra complex also including the Alcazaba, Generalife Palace and Gardens and the Palace of Charles V. 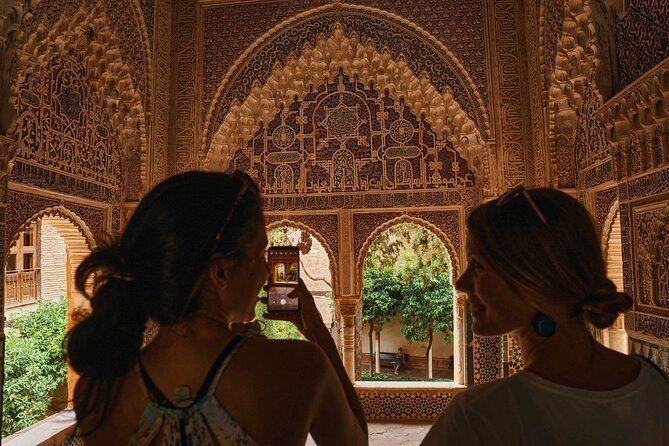 The best-conserved palace from the Al-Andalus Islamic sovereigns in Spain. Really one of the most amazing monuments you can visit.

The most ancient part of the Alhambra, the military part. We'll be able to see the whole city from its towers.

The Palace of Charles V is the only Renaissance building inside the Alhambra, located on the top of the Sabica hill. The building has never been a home to a monarch and stood roofless until 1957.

A small pergola leads to a wide esplanade corresponding to the lower terrace of the Partal. To the left is the architectural structure for which the location is named: the Partal Palace portico.

Summer Palace of the Alhambra and the beautiful gardens. The palace was used by the Muslim royalty as a place of rest. It was designed as a rural villa in the vicinity of the Alhambra, with decorative garden, fruit and vegetable patches, courts and other structures.

Confirmation will be received at time of booking.
Not wheelchair accessible.
Service animals allowed.
Near public transportation.
No heart problems or other serious medical conditions.
We recommend wearing comfortable shoes, no flip-flops or heels.
Travelers should have a moderate physical fitness level.
Original document required to access the monument.
This experience requires a minimum number of travelers. If it’s canceled because the minimum isn’t met, you’ll be offered a different date/experience or a full refund.
This tour/activity will have a maximum of 30 travelers.
Face masks required for guides in public areas.
Social distancing enforced throughout experience.
Regularly sanitized high-traffic areas.
Gear/equipment sanitized between use.
Paid stay-at-home policy for staff with symptoms.
Original document required to access the monument

We had a very good visit to the palace and gardens. Virginia, our guide, was excellent. She was extremely knowledgeable and very personable.

Our guide for this tour was excellent. However the tour did not include the best part - the main Nazrid palace. If you haven’t been before check your tour itinerary as it’s not to be missed. We would have liked to see it a 2nd time….

The tour was really enjoyable. Virginia was an excellent guide and very knowledgeable. It was the right amount of time and the right level of detail given.

Great history voice over and the right pace between sites! I also really liked that it felt partly like a bit of a hike.

The whole visit was amazing - the guide was very knowledgeable and made the visit super interesting.

We traveled 2 hours to the palace and when we got there had a message saying it was cancelled due to lack of people, we still looked around the palace having walked up the hill from the advised parking place, but didn’t have the tour we were expecting so no info on the palace.

Ended up being just us and our tour guide (we came on the off season). Our tour guide Virginia was very knowledgeable, adaptable, and friendly. The Alhambra is exquisite, well worth the visit.

Just for context, I was traveling with my 2 year old son. My two reasons for complaining are: 1) I bought 2 adult tickets the day before, and the tourist office told me that kids don’t pay to get into Alhambra so I thought I didn’t have to buy one for the baby. When we went to the meeting point the guide (that was lovely and nothing to say about her) told us that we also needed to buy a ticket for the baby (???). Went to their own store, and I was informed that needed to pay 24€ (!!!) for a ticket for my baby — after, looking at the printed ticket, the ticket was for an adult and no more than 8€. On top of that, they didn’t allow us to go on our tour and rescheduled us for the afternoon (from 10am to 3pm) with no reason at all. 2) In the description they mention the meeting point but never that you need to go up to the Alhambra walking (which is a stretch and ver inclined). I’m 8 months pregnant and would expect to see it clearly in the tour description, since that was a clear criteria to select the tour operator. The guide was really nice and sweet, and clearly new about what she was saying. However, there customer service was really bad and I don’t recommend it, specially for Families with kids.

Virginia was honestly the best guide I have had in memory. I could have listened to her speak all day about the Alhambra/Nasrid dynasty/etc- she knew so much but was able to contextualize it and deliver it in an engaging way. She did an excellent job keeping us prepared/informed (they have to check tickets 3 times etc), the pace of walking and information was perfect, she gave recommendations at the end for local restaurants. 2 spots on the tour give the audio guides some trouble due to the walls around you, but we passed those areas in less than 2 minutes. Be aware this is quite a walking undertaking, so wear comfortable shoes I would definitely recommend Virginia to other travelers!

Very well organized, the guide was very nice and patient. The audio devices are also great to make it more flexible and free

Virginia, our tour guide was amazing. She shared eat out recommendations and explained each palace history in detail at Alhambra.

It was a lovely tour through La Alhambra and the guide was always speaking, telling facts about every place we went.

STAY AWAY When we called them, the “manager” ended up insulting me “you [insert nationality] are the worst clients”. Tour does not start at La Alhambra, it inexplicably starts near the cathedral??? Despite several attempts, they jumped on the opportunity to take our money without providing the service and they refused to give us the underlying monument access ticket, which is explicitly issued under OUR NAMES AND PASSPORTS. Even the people who work at La Alhambra were surprised by how this company behaved. They assured us other companies let people pick up the ticket from the guide or even join the tour at the monument itself.

The tour was good and the guide had a lot of knowledge. Although it didn’t include the Nasrid palace. Also, we didn’t bring photo ID so had to pay another €15 on top to reschedule, it was quite expensive to begin with. In terms of the actual tour itself, I think they should give us some time to explore some of the sights ourselves. E.g. give us some information and then let us walk around for a bit. Sometimes I felt as though I was on a school trip and we all had to stay together. Overall quite expensive for what it was! Personally next time I would just get a normal ticket if possible, otherwise an audio guide might be better than an actual tour guide.

A very skilled and nice guide who made the history of Alhambra become alive. She was personal, friendly and took her time and adjusted to us. Really recommend her!

We are so glad we took this tour. Our guide was extremely knowledgeable and entertaining. The 3 pm tour ended at sunset at the summer palace, and the view was breathtaking. Highly recommend.

Wonderful experience, Virginia our guide with a lot of knowledge and very friendly, we learned a lot of history, while having a very pleasant time. A unique place that you must visit.

The tour is accurate based on the itinerary it provided. The guide was knowledgeable about Alhambra. Unfortunately, the tour skips the Nasrid Palace completely. This, in my opinion is what most people line up for. This palace if far better than the ones that were toured to us. I had to purchase another ticket and line up just to get in this as the tickets of this tour doesn't include this palace.

The tour guide was very nice and friendly. She also gave us great tips of where to go in town. I will highly recommend this tour.