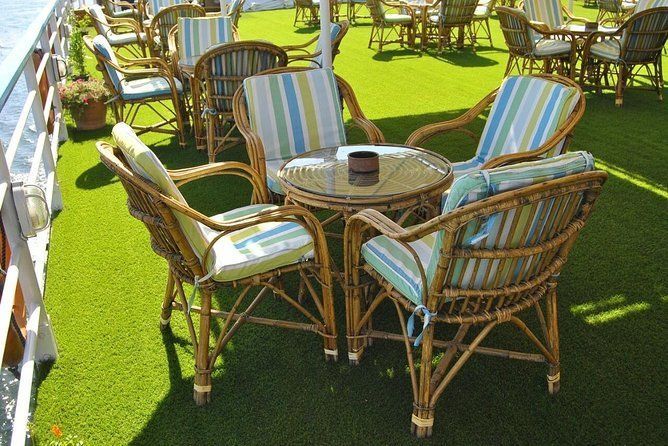 A Nile River cruise is an essential part of any southern Egypt trip.

This cruise from Aswan to Luxor is the perfect way to unwind for an evening and absorb yourself in Egyptian culture.

Enjoy all your meals on board the vessel

and stop at the Komombo and Edfu temples to learn more about ancient Egypt.

Sail along the Nile River during this cruise.

Absorb Egyptian culture through on board meals and entertainment.

A private cabin with an ensuite is included.

Save money on a cruise along the Nile, without sacrificing comfort

Led by an Egyptologist guide: Discover ancient sites on excursions.

One of the best ways to see Egypt is to take a trip on the River Nile.

A Nile River cruise is an essential part of any southern Egypt trip.

This cruise from Aswan to Luxor is the perfect way to unwind for an evening and absorb yourself in Egyptian culture.

Enjoy all your meals on board the vessel

and stop at the Komombo and Edfu temples to learn more about ancient Egypt.

Sail along the Nile River during this cruise.

Absorb Egyptian culture through on board meals and entertainment.

A private cabin with an ensuite is included.

Save money on a cruise along the Nile, without sacrificing comfort

Led by an Egyptologist guide: Discover ancient sites on excursions.

One of the best ways to see Egypt is to take a trip on the River Nile.

Pass By: Temple of Philae, Island of Agilika, Aswan Egypt

Enjoy sun set and sun rise while cruise sail above the river Nile which has many secrets.you can be one of a lot who desire to find out some of these secrets. our professional tour guide will pick you up from Aswan hotel, airport or railway station and start our first amazing tour

Visit the beautiful Philae Temple which was dedicated to the Goddess Isis.

Then proceed to the amazing High Dam an engineering miracle built in 1960 protecting Egypt from annual floods from the Nile. transfer to the Nile cruise.

after check in the cruise will start sailing around 2 pm. enjoy Aswan views and take rare photos of Aswan islands in the both sides of the Nile. watch the professional captain of the cruise who wear mostly galabya the official dress of upper Egypt men while he move from the port slowly step by step between the another cruises and motor boats. the Egyptian culture around you every where.the cruise sail by the Nubian islands where you will find their children play and their men and women work at the green fields. small fish boats. villages which is full of splendid Egyptian culture. it is great chance to have unique photos of the real culture.

around sun set time cruise will stop at komombo to visit komombo temple.the wonderful Temple shared by the two gods Sobek and Horus. Sobek also known as the Crocodile is the God of the Nile, the Army Military and fertility. Horus is the God of Sky and Kingship back to cruise.

continue sailing till edfu where the cruise will stop. over night cruise.

Early morning it is time to enjoy riding horse and carriage to visit edfu temple.The Temple of Edfu is an ancient Egyptian Temple which houses important scenes and inscriptions of the Sacred Drama which related to the conflict between Horus and Seth. Afternoon tea during sailing to Luxor.

Try to listen well to your Expert tour guide who will inform you by details the history of valley of the kings.Journey through the valley of the Kings and explore the tombs of King Tutankhamun, Ramssess V1, King Tutmosis and Amonhotep II, there are also many kings buried in the Valley.So let us unlock the secret story of the Royal Tombs, the world of mystery and treasure.

Now onto the Colossi of Memnon facing the Nile.The Colossi are twin statues of Amenhotep III, a large earthquake reportedly shattered the northern colossus,after the rupture the lower half of the statue was reputed to Sing, always within 1 or 2 hours of Sunrise.Here you can take some fabulous photos.

Our qualified Egyptologist Guide will be waiting to accompany you to visit the magical Karnak Temples, the greatest example of worship in history and was dedicated to the God Amun and his wife Mut. Karnak Temple was the place where the earliest International Peace Treaty known to Historians. The Egyptian version of the Peace Treaty was preserved on a wall in the Temple of Amun at Karnak.

Then continue onto visit the majestic Luxor Temple which was built by Amunhotep III in 18th Dynasty in the New Kingdom and it was completed by Ramesses II during the 19th Dynasty. King Ramses II was the most famous king in the 19th Dynasty he ruled Egypt for about 67 years. It was dedicated to the great god Amun-Ra his wife Mut and their son Khonsu together representing the Theban triad. Enjoy visiting Obelisk of Ramses II in front of the 1st Pylon.

You will then be transferred to the Airport/Railway Station for your final departure.

The cruise was cancelled the day before due to Government instructions, still awaiting for the money back as the agency said they would contact viator themselves but still didn't hear from them, just to leave feedback.

Can somebody please get in touch with me to get a refund? Thanks, Isabel.

To get right into the meat and potatoes, the cruise was fantastic. I booked last minute not knowing what to expect. My guide for the first day picked me up at the airport at 8:30am. Toured high dam, Philae and a spice shop before heading to the boat. Upon arriving to the boat I was greeted by Ramsey, my tour guide for the next 3 days. He was able to add me to the Hot Air Balloon ride in Luxor for Friday morning ($90USD). Lunch was served and in the evening we visited Kom Ombo temple followed by dinner which consisted of koushary and assorted Egyptian delicacies. Next day we had visited Esna Temple, Luxor temple and Karnak. On the last day we had the hot air balloon ride at sunrise which I highly recommend. After checkout we continued our tour to the valley of the kings and Hatshepsut temple.

Things to consider: entrance fees are not included so have at least 1500 Egyptian Pounds on you ($150USD) for tips, entrance fees and souvenirs. Also, don’t be afraid to ask questions, Ramsey does an amazing job explaining the history and involving you with the tour.

Great value, rooms are clean, staff is friendly and great for self travelers or in a group.

Nice trip over the beautiful nile River. Amazing scenery and temples. Our guide Mona was great covering all the amazing temples with knowledge and a lot of smiles. Highly recommended 👍🏼👍🏼

positives first..... We left the cruise with mixed emotions. The tour guide Mr. Ramsey ( sorry not sure of spelling) was extremely pleasant and good. Although he didnt really solve our issues but he always provided a listening ear. He gave us good information on the sights we visited.
Now to the negatives, the booking process does not give you a clear view of the kind of cruise ship your booking into. So when we landed on the ship we were quite shocked to begin with. Moreover a couple of days before the start of our trip we were told to increase the stay by a night because of sailing date issues for which we have to pay extra too!!!!. Given that one is trying to wind up work before a 10 day tour we were forced to agree to their suggestions. A bit annoying when you have finalised your itinerary months before the holidays. well long story short.... we heard from another
co - passenger too that he was talked into increasing his one night stay to 2 nights...........interesting...... Once on board there was no way we were going to stay the extra night especially with a 6 year child. At this point we were truly relieved that Viator cooperated with us and did not haggle.
The reception on the Nile Admiral ship is below average
All in all I would not recommend the Nile cruise.

I was with my wife for a two nights cruise on 'Grand Princess Lovers' and we had an amazing trip. The food bufet was really nice. Plenty of traditional egyptian dishes to choose from. The room was really comfortable with a huge sliding windows for nice sunset and sunrises on the Nil. All the people around us were really nice and helpful. About the guides. We had different guys for different trips. We had four egyptologist guides and among them we liked mostly Hatem. He was our guide for an entire day visiting with us Valley of the Kings and Luxor/Karnak temples. Full of knowledge, helpfully and answering all the questions. And above all, he has a special way of presenting facts that keeps you interes open. Always smiley and full of joy. The only regret was that we didn't have him for the whole cruise. We had four guides in total and I can mention also Ramsi, our guide from the first day. Very detailed explanations and very helpful.

This cruise was much more than I expected. Very comfortable rooms, with everything you could possibly need. Swimming pool, relaxing top deck, pool room and shops are on board. Hany was excellent with keeping in touch and making sure everything you need is taking care of. The food was plentiful and delicious. Pickup and dropoff was perfect and they took us everywhere we wanted to go, for free. Hatem, our tour guide is simply the best! He really goes above and beyond to make sure you are safe and well taken care of. Mina was also exceedingly helpful. You must do this cruise if you visit Egypt. I assure you will not regret it. The excursions were fantastic and I recommend you get a guide and let them know your needs. Remember to bargain in the markets. I took my family, and this trip was perfect for the kids as well. All the staff on this cruise will treat you like royalty. This was a totally unforgettable cruise experience.