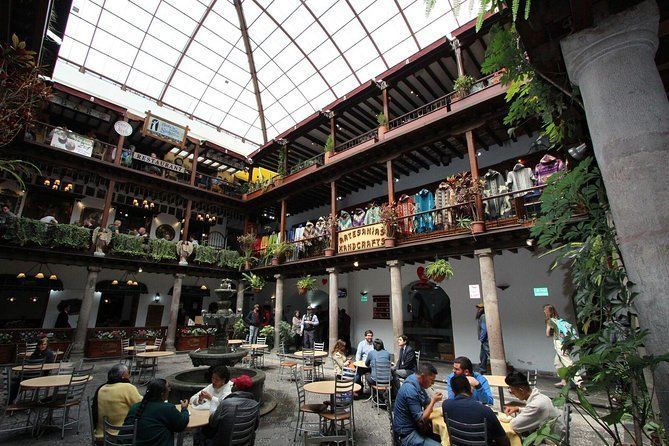 Teleférico of Quito is a cable car located along the flanks of the Ruco Pichincha volcano. Once there you can have a panoramic view not only of Quito, but also of the surrounding mountains topped with snow and the whole natural and ecological environment of the Andes. Quito city tour visit its historical center, admire ancient buildings, churches and squares.

Teleférico of Quito is a cable car located along the flanks of the Ruco Pichincha volcano. Once there you can have a panoramic view not only of Quito, but also of the surrounding mountains topped with snow and the whole natural and ecological environment of the Andes. Quito city tour visit its historical center, admire ancient buildings, churches and squares.

Capped by green-and-gold domes, La Compañía de Jesús is Quito’s most ornate church and a standout among the baroque splendors of the Old Town.

It is a 16th-century Roman Catholic complex in Quito, Ecuador. It fronts onto its namesake Plaza de San Francisco. The imposing structure has the distinction of being the largest architectural ensemble among the historical structures of colonial Latin America

Santo Domingo Church borders the southern edge of Quito Old Town and stands grandly over Santo Domingo Plaza. The church represents fascinating periods in Quito’s religious history, as it was constructed by Dominicans and modified by Italian priests.

Plaza Santo Domingo, near the southwest end of Calle Guayaquil, is a regular haunt for street performers. The plaza is beautiful in the evening, when the domes of the 17th-century Iglesia de Santo Domingo, on the southeast side of the plaza, are floodlit.

It is the largest neo-Gothic church in Latin America, the most important characteristic of its facade, are the gargoyles, which maintain a direct relationship with its design. It is also a strategic view of the Historic Center and the North of the city.

is the seat of government of the Republic of Ecuador, located in Quito. Access is by the public space known as Independence Square or Plaza Grande (colloquial name), around which are also the Archbishop's Palace, Municipal Palace, Hotel Plaza Grande, and Metropolitan Cathedral.

It is a gondola lift in Quito, Ecuador, running from the edge of the city center up the east side of Pichincha Volcano to lookout Cruz Loma.

La Ronda is an enchanting addition to Quito‘s historic district, and the long curving street has quickly become one of the city’s most popular tourist attractions. Read more about its history and learn the 11 best ways to enjoy this magical street.

Confirmation will be received at time of booking.
Travelers should have a moderate physical fitness level.
Operates in all weather conditions, please dress appropriately.
Comfortable walking shoes are recommended.
A minimum of 2 people per booking is required.
This experience requires a minimum number of travelers. If it’s canceled because the minimum isn’t met, you’ll be offered a different date/experience or a full refund.
This tour/activity will have a maximum of 12 travelers.
Face masks required for travelers in public areas.
Face masks required for guides in public areas.
Face masks provided for travelers.
Hand sanitizer available to travelers and staff.
Social distancing enforced throughout experience.
Transportation vehicles regularly sanitized.
Guides required to regularly wash hands.
Regular temperature checks for staff

Good city tour. Guide was knowledgeable. Unfortunately it was totally cloudy, so no view from the telefinicular.

We have used your company many times in other countries. However, this time was not good! First, we were told to meet in the lobby at 8:30 but your guide, Daniel, didn't come until a few minutes after 9 am. He immediately told us we would be done by 1:00 pm 4 hours I informed him that this was a 6 hour tour. I got the impression he had somewhere else to be and wanted to cut it to 4 hours. I showed him the paper work that stated the 6 hours. There were many sites in Independence square we could have enjoyed such as the market/tents that we set up for the holiday being celebrated but he breezed along the outside of them to rush the tour. He also parked his car in an underground parking garage 6 levels underground and we had to walk 6 flights of stairs to go out and come back. Most guides would drop us at a location, park their car and meet us as we would be browsing. Upon return to get the car, Daniel said he left all his money in his car so we had to pay the parking cost. We were back in our hotel room at 2:00 pm which shows you how rushed the tour was. NOT a 6 hour tour that we expected to have and that we paid for. NOT happy at all. Will seriously consider another tour agency next time!

great, the guide was amazing, city is beautiful!

Tour was excellent and informative. Daniel arrived on time, was courteous at all times. Spoke English extremely well. As very knowledgeable about Quito and surroundings. Would recommend with no caveats.