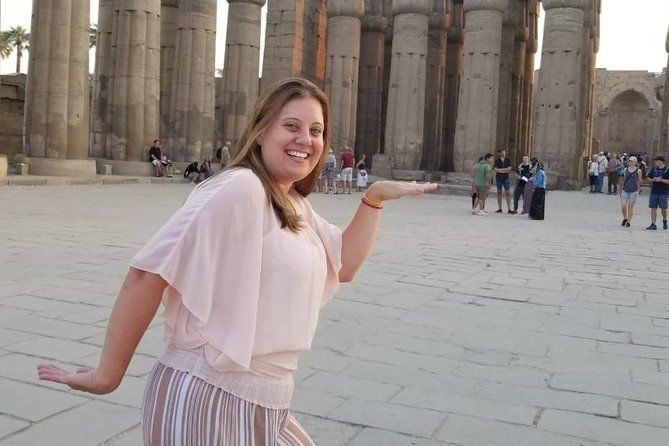 Private Tour in Valley of the Kings, Queen Hatshepsut, Luxor, and Karnak Temple

Enjoy 8 hours covering the West and East bank of Luxor and see most of the tourist attractions in Luxor characterized by its ancient history. Visit the Valley of the Kings, Queen Hatshepsut, Karnak and Luxor Temples with air conditioned car, lunch and tour guided.

Enjoy 8 hours covering the West and East bank of Luxor and see most of the tourist attractions in Luxor characterized by its ancient history. Visit the Valley of the Kings, Queen Hatshepsut, Karnak and Luxor Temples with air conditioned car, lunch and tour guided.

Private Tour in Valley of the Kings, Queen Hatshepsut, Luxor, and Karnak Temple

The valley stands on the west bank of the Nile, opposite Thebes (modern Luxor), within the heart of the Theban Necropolis.The wadi consists of two valleys, East Valley (where the majority of the royal tombs are situated) and West Valley.

The complex is a vast open site and includes the Karnak Open Air Museum. It is believed to be the second[citation needed] most visited historical site in Egypt; only the Giza Pyramids near Cairo receive more visits. It consists of four main parts, of which only the largest is currently open to the general public. The term Karnak often is understood as being the Precinct of Amun-Ra only, because this is the only part most visitors see.

Colossi of Memnon are two massive stone statues of the Pharaoh Amenhotep III, who reigned in Egypt during the Eighteenth Dynasty of Egypt. Since 1350 BCE, they have stood in the Theban Necropolis.

BOY bring a wet towel to stay cool, Valley of the Kings we go in 3 tombs which you pick, I could have skipped Queen Hatshepstu Temple but Luxor and Karnak Temples are the best. Our guides were young and seem to just want to get done. I could have stayed at Karnak but gosh it makes a long day with such amazing temples.

My brother and I had a great time on our tour. We landed at the airport and were greeted by our guide just outside the airport doors. We were then picked up by a private car and transported through both East and West banks of Luxor enabling us to see all the major sites and attractions in just one day. The tour included a delicious, large, multi-course lunch at a covered rooftop restaurant with views of the Nile river. Our guide was very accommodating and very knowledgeable, he was able to answer any and all of our questions throughout the entire tour. When the tour was concluding our guide made arrangements to accommodate our downtime as we had a late flight. Could not have been a better experience, highly recommend this tour to anyone traveling to Luxor for a day!

This tour was reasonably priced and allowed me and my travel partner to see the most famous Luxor landmarks in one day. The tour was well organized and they allowed for personalization and hotel pick up. I strongly recommend this tour if you have only one day in Luxor.