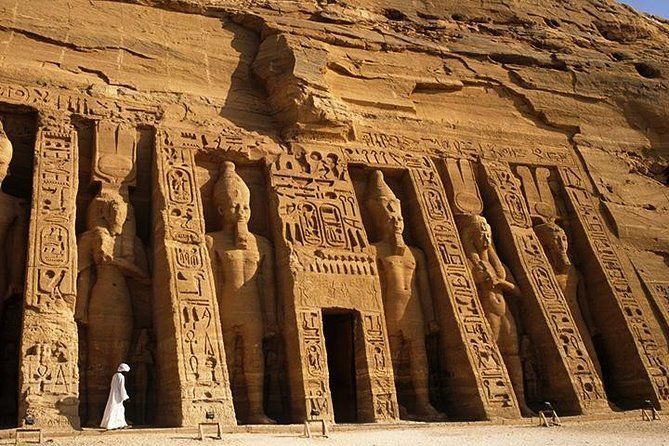 Leave Luxor city to visit two temples of Abu Simbel, which are considered the master pieces of the ancient Egypt.

Leave Luxor city to visit two temples of Abu Simbel, which are considered the master pieces of the ancient Egypt.

Stop At: Temple of Philae, Island of Agilika, Aswan Egypt
We will pick you up from your hotel in Luxor and take you to Aswan for visiting the Philae temple, which dedicated to Goddess Isis. It is considered the most beautiful Greco-Roman temple built in Aswan.
Duration: 2 hours

No meals included on this day.
Accommodation included: Overnight in Aswan.

Stop At: Abu Simbel Temple Complex, Abu Simbel, Abu Simbel Egypt
At 4.00 am we will pick you up from your hotel in Aswan and transfer you to Abu Simbel (which was built by Ramses II).

Your Egyptologist will explain to you why not only the two temples at Abu Simbel are among the most magnificent monuments in the world, but also why their removal and reconstruction was an historic event itself. Listen how it was, when the temples, 174 miles (280 kilometers) from Aswan were threatened by submersion in Lake Nasser, due to the construction of the High Dam. The Egyptian Government secured the support of UNESCO and launched a world wide appeal.

Imagine how it must have been during the salvage operation which began in 1964 and continued until 1968. The two temples were dismantled and raised over 197 feet (60 meters) up the sandstone cliff where they had been built before more than 3,000 years. Here they were reassembled, in the exact same relationship to each other and the sun, and covered with an artificial mountain.

Standing and looking at the stones, you will see that most of the joins in the stone have now been filled by antiquity experts, but inside the temples it is still possible to see where the blocks were cut. You can also go inside the man made dome and see an exhibition of photographs showing the different stages of the massive removal project.

Later you will be driven back to your hotel in Luxor
Duration: 1 hour

Meals included:
• Lunch
No accommodation included on this day.

Confirmation will be received at time of booking.
Not wheelchair accessible.
Most travelers can participate.
This tour/activity will have a maximum of 10 travelers