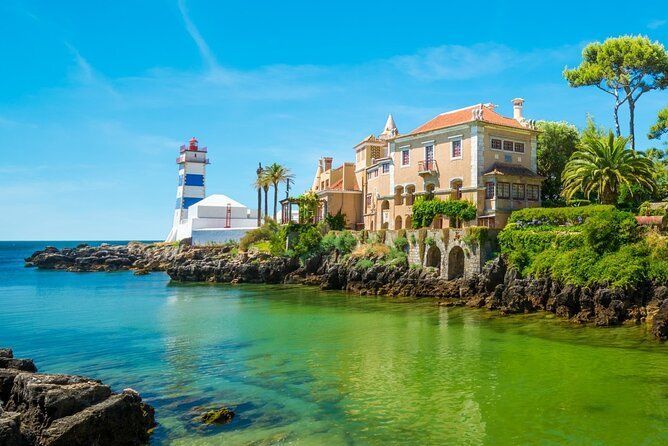 You will visit the World Heritage Site of Sintra where hundreds of years of history and culture await you. Doing a short walk in the old city center you'll find yourself surrounded by the old houses now converted into small quaint handicraft shops and traditional pastry shops. Driving around the mountain you will pass by amazing Royal Palaces, Chalets and Aristocratic residences in the most incredible combination of architectural styles, colors, and shapes that you will find in Portugal.

The return to Lisbon will follow a very special road named "Marginal" by the Portuguese running always parallel to the white sandy beaches and amazing 17th-century fortresses starting at the town of Estoril with its famous casino.

You will visit the World Heritage Site of Sintra where hundreds of years of history and culture await you. Doing a short walk in the old city center you'll find yourself surrounded by the old houses now converted into small quaint handicraft shops and traditional pastry shops. Driving around the mountain you will pass by amazing Royal Palaces, Chalets and Aristocratic residences in the most incredible combination of architectural styles, colors, and shapes that you will find in Portugal.

The return to Lisbon will follow a very special road named "Marginal" by the Portuguese running always parallel to the white sandy beaches and amazing 17th-century fortresses starting at the town of Estoril with its famous casino.

You will feel as if you were traveling back to the Portuguese Court of the 19th Century! You will start from the historical center of Sintra towards the mountain with its lush vegetation, amazing chalets and aristocratic estates of the 19th century, surrounded by a special microclimate, mostly known for its humidity, that helps create the romantic atmosphere that characterizes the village. At the top of the mountain is the magnificent Pena Palace, with the most incredible combination of architectural styles, colors, and shapes that you will find in Portugal.

Upon arrival, you will stroll through the rooms and halls that once belonged to the kings and queens escorted by their servants. If weather allows, you will go to the terrace, which will offer you the most amazing views of the surrounding forest and the sea, knowing that it was once possible to watch the departure of the caravels during the era of the Portuguese Discoveries.

A former summer resort for Europe’s royal families, Estoril preserves the lively, relaxed and cosmopolitan atmosphere that made it famous.

This mood and its beauty were also reasons for it to have become a sanctuary during World War II for those seeking a quieter place to escape a Europe in turmoil. In the oldest hotels, you can still hear stories from those times.

It is the ideal place for family holidays. The promenade between Azarujinha beach and Nossa Senhora da Conceição beach, in Cascais, is perfect for a walk, feeling the sea breeze on your face, or for a bicycle ride. And you will always find it hard to resist a dive in the white, fine sandy beaches or in the Tamariz swimming pool. The sea is a permanent fixture. Whether for a late afternoon reading or dinner while watching the sunset, this is a place of choice.

The Grand Casino is still a point of attraction. You can not only try your luck in Europe’s largest casino but also enjoy a programme of events and exhibitions which makes it into major contributor to local entertainment, that later can be continued in one of the many local bars.

The town of Sintra and its natural surroundings is one of Portugal's landmarks, classified by UNESCO as a World Heritage Site! This day will take you through hundreds of years of history and culture. As soon as you arrive at Sintra you’ll be dazzled by the mountain, its exuberant flora, and the very special microclimate. The high humidity provides an extraordinary Flora, which helps in creating the romantic and natural ambiance that so much characterizes Sintra. Driving around the mountain you will notice the amazing chalets and aristocratic residences, an incredible combination of architectural styles, colors and shapes. Allow the mystical ambiance to embrace you and discover the hidden secrets of Sintra.

Cascais began as a fishing village and was developed mainly when his Majesty the King Dom Carlos I of Portugal decided to use the Citadel of Cascais to build his summer residence, now transformed into a Pousada. King Dom Carlos was a great sailor, so he loved the sea and so, living in Cascais, was close to it every day. With him noble families also came to live in this picturesque village and, even today, it is a very aristocratic village.

Due to Portugal's neutrality during World War II, Cascais also had an important role as major safe area for political refugees. At that time, King Umberto II of Italy lived here in exile.

Naturally, the proximity to the Atlantic has always contributed to keeping alive. the fishing traditions and nautical sports, especially sailing. The conditions of the Cascais Marina, the calm sea, the climate, the beaches, and the heritage are more than enough reasons for it to be a place of choice for many seamen who spend their holidays here and for holding frequent regattas, either recreational or competitive.

At the northern end of the town, Boca do Inferno (Hell’s Mouth) is a very popular place to visit. It is a striking rock formation where you can observe the power of nature and the sea. Further along, you can see the São Jorge de Oitavos Fort and, some 10km away you can find the Guincho Beach, another area with an incredible seascape, known for offering fabulous fresh fish and seafood meals. It is one of the main surfing and windsurfing spots on the Portuguese coast, often featuring in world tournaments.

Confirmation will be received at time of booking, unless booked within 2 days of travel. In this case confirmation will be received within 48 hours, subject to availability.
Not wheelchair accessible.
Stroller accessible.
Infant seats available.
Most travelers can participate.
This is a private tour/activity. Only your group will participate.
Face masks required for travelers in public areas.
Face masks required for guides in public areas.
Face masks provided for travelers.
Hand sanitizer available to travelers and staff.
Social distancing enforced throughout experience.
Regularly sanitized high-traffic areas.
Gear/equipment sanitized between use.
Transportation vehicles regularly sanitized.
Guides required to regularly wash hands.
Paid stay-at-home policy for staff with symptoms.
We have the Clean & Safe seal, and the Safe Travels seal

Very Knowledgeable guide. He speak several languages. They adapted the trip to our needs

The tour was excellent. Sara was very knowledgeable not just about Sintra, but about many historical facts and places within the Lisbon area and friendly and made the trip well worth it. We would highly recommend the tour for those who only want to spend a half day trip outside of Lisbon.

This tour was amazing!

6 of us took the private tour to Sintra from Lisbon. It was the perfect way to begin 10 days in Portugal - mainly due to our wonderful guide, Santiago. He took us to the Palace of Pena where he accompanied us inside(unlike some other tours when the guide drops you off and picks you up later). Santiago shared the history and folklore of the beautiful palace on the hill. His English was perfect and his knowledge covered everything from culture to history to American current affairs, and anything else we could throw at him.

We highly recommend this tour. Our tour guide, Joanna, was the greatest!! She had a wealth of knowledge regarding these sites as well as the history of Portugal in general -- not just Lisbon. We now have a great deal of appreciation for Lisbon and Portugal bc of all that we learned from her. From the history of the exploration to the architecture and even the best foods of Lison, we gave us so much more than just a tour!! We do believe that we much enjoyed this tour and the information alone paid more than for the cost of this tour. We urge you take this tour. And if possible, see if you can ask for Joanna. She is the BEST!!

A nice leisurely private tour of the area while we waited for our cruise ship to board. The guide was fantastic and they even dropped us off at the cruise terminal at the end of the tour.