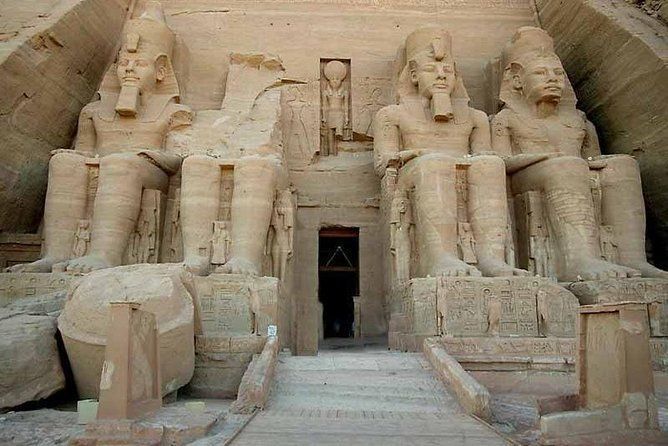 Visit the extraordinary Abu Simbel Temples on small group full-day tour, with return transfers by air-conditioned van from Aswan. With an Egyptologist guide, see the Sun Temple of Ramses II, and the Temple of Queen Nefertari.

Visit the extraordinary Abu Simbel Temples on small group full-day tour, with return transfers by air-conditioned van from Aswan. With an Egyptologist guide, see the Sun Temple of Ramses II, and the Temple of Queen Nefertari.

Our Guide  will pick you up from your hotel in Aswan by a PRIVATE air-conditioned vehicle to enjoy Abu Simble which its main attraction being the great sun temple of RamsesII and the temple of queen Nefertari. Both temples was discovered in 1813 it was almost completely covered with sand. Then both temples were moved in 1960 by the help of Egyptian government and UNESCO to avoid the rising water of the Nile. Ramses II built the temple mostly to honor himself as inside there is a mural depicting his famous victory at Qadesh battle where his army defeated his enemies. On the north of Ramses temple, the Nefertrai Temple which was built by Ramses II to his favorite wife queen Nefertai among other 200 wives and concubines. After finishing the visit you will be escorted back to your hotel in Aswan by your private air-conditioned vehicle

Confirmation will be received at time of booking.
Children must be accompanied by an adult..
Please send the passports number and full name.
Wheelchair accessible.
Stroller accessible.
Near public transportation.
Infants must sit on laps.
Infant seats available.
Transportation is wheelchair accessible.
Not recommended for travelers with back problems.
Travelers should have a moderate physical fitness level.
This tour/activity will have a maximum of 8 travelers.
Face masks required for travelers in public areas.
Face masks required for guides in public areas.
Face masks provided for travelers.
Hand sanitizer available to travelers and staff.
Social distancing enforced throughout experience.
Regularly sanitized high-traffic areas.
Gear/equipment sanitized between use.
Transportation vehicles regularly sanitized.
Guides required to regularly wash hands.
Regular temperature checks for staff.
Temperature checks for travelers upon arrival.
Paid stay-at-home policy for staff with symptoms.
Contactless payments for gratuities and add-ons

The tour guide was on time picking us up at 5 am, and we stopped to see the sunrise on our way to Abu Simbel, and the oasis on our way back. We were not told it would cost us extra to take pictures in the tombs, but the tour guide was helpful in taking pictures of us, and dropping us off at the airport on the way back.