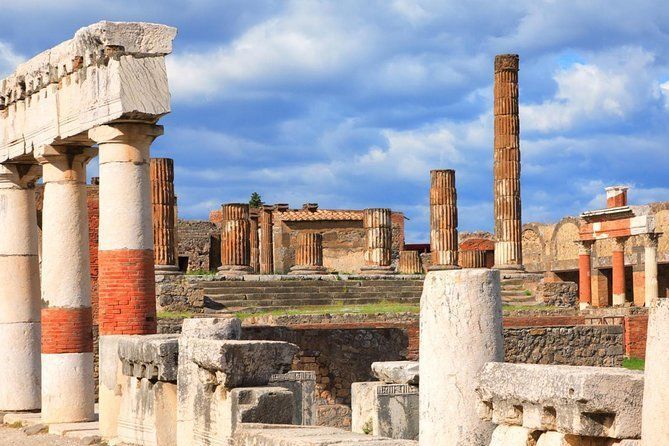 Beautiful landscapes and fascinating history in just a single tour. From the archaeological sites of Pompeii to Herculaneum

Beautiful landscapes and fascinating history in just a single tour. From the archaeological sites of Pompeii to Herculaneum

We'll drive you through the most significant

You will meet your

Pompeii where you will spend approximately 2 hours.

Its initial rediscovery was in 1599 and there was a broader rediscovery almost 150 years later in 1748.

You will see many

Then you will continue to

Herculaneum (about 15 min to reach it).

The tour will take about two hours.

was buried and destroyed by

was wealthier than Pompeii, characterized by an extraordinary density of fine houses with more lavish use of coloured marble cladding, whose original splendour has been preserved and covered by a deep pyroclastic material.

After Pompeii and Herculaneum

the driver will take you back to your hotel.

Confirmation will be received at time of booking.
Not wheelchair accessible.
A maximum of 7 people per booking.
The duration of transfers are approximate, the exact duration will depend on the time of day and traffic conditions.
Infant seats available.
No heart problems or other serious medical conditions.
Travelers should have a moderate physical fitness level.
Infant seat are available on request.
This is a private tour/activity. Only your group will participate

When we booked this trip it was called a private tour, indicating that it would be a "private tour". To us , that meant we would have our own guide. In the description though it said they recommended hiring a private guide. This made no sense so i called to clarify. The help desk told me that our driver would be our tour guide. For $600 our driver woild pick us up, drive us to Pompeii and Herculaneum and be our tour guide and bring us back . Sounded great. We booked the tour. When our driver picked us up and stopped at Herculaneum he told us where to meet him when we were done. We said wait, we thought you were our guide. He said oh no, I am just your driver. You have to hire a guide. This was not the drivers fault so we paid for our $600 taxi ride to the ruins and back to the hotel. We just toured the ruins on our own. Once back at the hotel I placed a complaint in with Viator. Their first response was that we can't refund your trip. The add says you have to hire a guide at the sites. I explained that their people told me our driver was our tour guide and that I would not have paid $600 just for a ride when our hotel said they would provide transportation for $350. I explained that my phone conversation with their help desk should be recorded if they want to check and that I wasn't looking for a full refund. I just wanted the difference of what just the transportation cost. In a matter of a couple days, they refunded me half of what we were charged and apologized for the inconvenience...That is great customer service and I will definitely use them again! The sites are amazing by the way. Other then the snafu with the description of the tour on this one trip, I would give them a 5 because we had other trips planned with them that were absolutely great!

Private transfer from Sorrento to Naples with tour of Pompeii Ruins

Private transfer from Naples to Sorrento with tour of Herculaneum Ruins