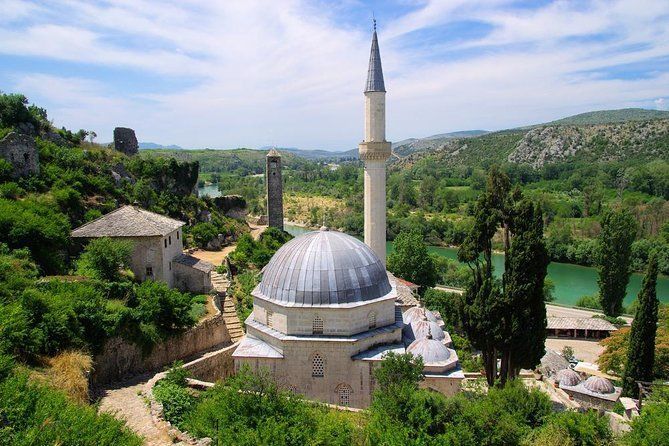 Visit Medjugorje and Mostar on this incredible private day trip from Dubrovnik, blending culture with religious sites. Traveling with an expert local guide by luxury vehicle, your tour includes a walking tour around Počitelj’s UNESCO-listed town center, a visit to the Christian pilgrimage town of Medjugorje and a walking tour around Mostar. See the incredible Mostar Old Bridge (Stari Most) and enjoy a final stop in Tekija to see Turkish-style architecture.

Visit Medjugorje and Mostar on this incredible private day trip from Dubrovnik, blending culture with religious sites. Traveling with an expert local guide by luxury vehicle, your tour includes a walking tour around Počitelj’s UNESCO-listed town center, a visit to the Christian pilgrimage town of Medjugorje and a walking tour around Mostar. See the incredible Mostar Old Bridge (Stari Most) and enjoy a final stop in Tekija to see Turkish-style architecture.

Board your air-conditioned luxury vehicle in Dubrovnik. As you travel through the picturesque delta of the Neretva River, learn about the history of this region.

Medjugorje, spiritual and religious place, is one of the most famous pilgrim places in the Catholic world. From the apparition of Our Lady of Peace in 1981, this place has been visited by visitors from all over the world.

Throughout the centuries Mostar became the meeting point of various cultures and religions. Such rich history has left an imprint you will witness during this full day tour. In addition to the Old Bridge, the symbol of the town, you have an option to visit the Mosque of Mostar, Turkish house and many other monuments in the town. You will witness the amazing fusion of eastern and western cultures, so many contradicting things and different customs in one place.

Let's not forget the visit to Pocitelj, a place that had big impact in history of Herzegovina. Take this opportunity and create an itinerary that will suit you the best!
Arrival back to Dubrovnik in the afternoon hours.

While the scenery , history , topography were excellent , what set aside this experience, was our guide Vladimir. To go through a war, and come out with such a positive and realistic views shows the character of a good man. And that should be the purpose of travel to connect to good men worldwide.

What a surprise and such a wonderful experience both my wife Michele and I had on this private day tour. We were picked up at 7.30am by Mateo our personal driver for the day. WHOW!!! what a friendly, intelligent fellow he was and we both felt so much at ease with him throughout the whole day. He was full of information, personality plus, flexible and so much knowledge of the history of the whole region.
Medjugorje was a very very special place, Thank you Mateo for making it so memorable. I hope to return to Medjugorje soon and spend extra days there.

The tour was so awesome! Ivan is the absolute best- you must request him! He is very knowledgeable about Croatia and Bosnia as well as incredibly polite. Mostar is beautiful and an absolute must see. Definitely worth the day trip, especially with Ivan!

This was a great trip, partly because our driver/guide was from Mostar, and partly because he was an awesome fun person! He took us to places not on the tour and had lots of tidbits of personal history. Make sure to climb Apparition Hill on your Medjugorje tour way worth the climb.

Our trip to medjugorje and Mostar was excellent, Robert our tour guide was so nice and very knowledgeable of the local areas. It was Robert who made our trip so memorable! Medjugorje was fantastic and very spiritual. Mostar was amazing place, it was like a middle eastern Kazbar! We travelled in style and comfort! I would highly recommend booking this trip, it is worth every single penny! Many thanks to Robert from Zagerb, fantastic tour guide and a lovely person!

Fantastic trip that with a little bit of advice from Steipan our guide, we adjusted to suit our preferences. Steipan was really helpful, knowledgeable and a good travel companion on a long day trip ! Brilliant !!

Our guide was extremely well informed on all aspects of our tour. He was polite and friendly, making our tour well worth the money. His driving was safe and comfortable and we would like to thank him for making our day both memorable and happy.

I cant wait to go back to Medjugorje and Mostar.
Our private guide was personable, polite and knowledgeable.
We were able to control how much time we chose to spend in each sight and we were able to go to many other places in the area that I was not familiar with which was an added bonus.
Money well spent.

Our private tour was brilliant and well worth the money. Boris was an absolute gentleman who took our specific needs into consideration. Boris was a wealth of knowledge about the history of his country and was more than happy to answer all our questions. We seen lots of beautiful places

Interesting to see the Mostar bridge, but not much else to see. But our guide, Boris was absolutely fantastic.

The guide was amazing and most accommodating!
Extremely patient and very nice!
Worth every cent!

Had a great private tour! Ivan was a super tour guide and driver! Would highly recommend taking a private tour. We were able to adjust the itinerary to our needs.

Absolutelu great day. We were able to accomplish far more than we could have in a bus tour. Our guide Dan showed us Mostar and Maedjugorje, as well as other towns and spectacular waterfalls. I would highly recommend this trip.

What a wonderful experience. Our Guide Vlado was tremendous. He went out of his way to share info and give us more than we expected. It was a highlight of our trip. Thanks very much for a fabulous day!

This tour was amazing! Viator uses local company Super Tours, and our tour guide Olga and our driver were both wonderful. Olga spoke fluent english, and was outgoing and informative. She knew a ton about the history of the region, and gave us a detailed explanation of the region and both the ancient and recent history. We skipped Medjugorge for more time in Pocitelj and Mostar and were glad we did. Pocitelj was very quaint and interesting. Mostar itself was stunningly beautiful. The bridge is amazing, and the old town market was colorful and fun. Lots of fun (and cheap, but well made) trinkets and souvenirs to buy. The borders between Bosnia and Croatia were no problem at all. We got traditional Turkish teas at lunch at a restaurant Labirint. We went for the traditional Bosnian grill and the local wine and it was absolutely delicious. With great views of the bridge and the mosque. I would highly recommend this tour (or any tour with this company) to anyone.

We had a great Spanish speaking guide Olga and a driver that I dont remember his name, but both very professionals in their work, it was a private tour for the four of us and since our main interest was going to Medugorje and had visited Mostar earlier she took us to other interesting places.

My wife and I had a greaet day trip to Mostar with our guide, Phillip. He was a Croatian native (Zagreb), engaging, and willing to share stories and insight into the many things to see and do in the area. The tour itself was fantastic. Pickup was right on time and we made a couple of interesting stops on the way to Mostar, including a quick stop after crossing into Bosnia the first time (Neum), and a stop in Počitelj (had about an hour to check it out). We were also provided with a different guide in Mostar who gave us about an hour long walking tour - his family is from Mostar and he grew up in the area. We enjoyed hearing his perspective on Mostar and Bosnia and would not hesitate to do the tour again. All in all, we had a great time and will book with Viator again in a heartbeat when the time comes.

Excellent Tour , Dont leave at the suggested time early in the morning . Delay by an hour and a half or so . We had less traffic and by the time we got to Medjugorje all the tour busses had left so there were only about 2 doz people there . So we totally avoided the crowds . Fantastic Tour Guide Great tour

Pick up on the morning of the tour was prompt and hassle free. Great communication with tour company and excellent guide (Phillip). We did not want to tour Medjugorje and tour guide was flexible enough to take us to another destination (Pocitelj) instead. Guide provided a quick tour of Mostar before leaving us to have some personal time for a few hours. Great tour overall.