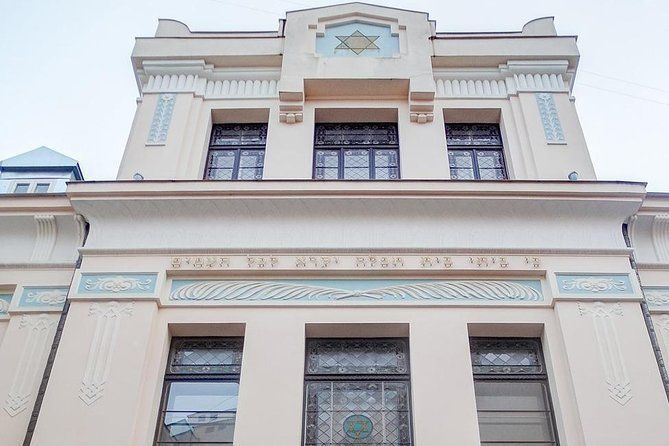 5-hour sightseeing tour of the main attractions of Riga with photo stops and a coffee break, as well as a visit to Synagogue, Riga Ghetto and Latvian Holocaust Museum and the Riga Art Nouveau Museum.
You will see Riga Castle, House of the Blackheads, St. Peter's Church, Riga Cathedral, Riga Art Nouveau, Swedish Gate, Cats House, etc.
Attention! On Mondays, the entrance to the Art Nouveau museum will be replaced by a visit to the Dome Church.

5-hour sightseeing tour of the main attractions of Riga with photo stops and a coffee break, as well as a visit to Synagogue, Riga Ghetto and Latvian Holocaust Museum and the Riga Art Nouveau Museum.
You will see Riga Castle, House of the Blackheads, St. Peter's Church, Riga Cathedral, Riga Art Nouveau, Swedish Gate, Cats House, etc.
Attention! On Mondays, the entrance to the Art Nouveau museum will be replaced by a visit to the Dome Church.

The current castle dates back to 1515. It was the Livonian order residence, currently occupied by the president of Latvia. The castle is an impressive structure with the white walls, fat towers and red roof. After the 2013 fire, the castle is closed for renovation till the end of 2018.

Old Town of Riga is famous for its cathedrals, old buildings, churches. Take a walk through the labyrinth of the narrow brick streets, enjoying the colorfull buildings, little shops and sweet restaurants. See the famous Dome square and cathedral, Castle with the Castle square, Town Hall, house of the Blackheads and others.

Stop At: House of the Black Heads, Ratslaukums 7, Riga 1050 Latvia

House of the Blackheads is an impressive colorfull structure on the Town Hall square. It belonged to the society of merchants and ship owners, formed in 15th century in the Baltics. The current exterior of the building dates back to the middle of the 17th century.

A Roland statue is a statue of a knight with a drawn sword, signifying the town privileges of a medieval city, often associated with the Hanseatic Trade League. It's placed it the heart of the old town. Roland was respected as a patron of the trade, people came to his statue, seeking health, fortune, wealth

Riga's St.Peter's Church dominates the cityscape as the tallest spire, and as one of the oldest and most valuable monumental architecture edifices in the Baltic States from the Middle Ages. St.Peter's is the tallest of the Riga churches, a significant landmark, and a prime example of the 13th century Gothic style.

The cathedral is one of the most recognizable landmarks in Latvia, and is featured in or the subject of paintings, photographs and television travelogues. Like all of the ancient churches of the city, it is known for its weathercock on the top. It was built in 1211 on the high Daugava bank. The cathedral has the 2nd largest organ in Latvia. You can visit the regular organ concerts in the cathedral.

Cathedral (Dome) Square is the largest square in the Old Town of Riga. It houses several architectural monuments: Riga Cathedral, Riga Bourse House and other buildings from the 19th and early 20th century. A lot of activities of the city meet here, flowing in from seven streets.

The historical center of Riga is included in the UNESCO World Heritage List. Riga fell into this important register due to its medieval buildings, wooden architecture of the 19th century and art nouveau architecture, which in terms of quality and distribution have no equal in the world.

The art nouveau museum is located in the former apartment of Konstantīns Pēkšēns. It can be recognized from far away by the tall tower above the front of the house. Museum features the stunning room interiors, and its spiral staircase is one of the most impressive in all Europe.

The Swedish gate is part of the walls of the Old Town, which passed around Riga in medieval times, serving as both a fortification wall and an important border for trade purposes. The Swedish gate was also one of the few entrances to the city that provided access to the barracks outside the city wall, and were built in 1698.

The Cat house is the most distinct building of the Old Riga with the two statues of the angry looking cats on the top of the building's towers. There are lots of legends about the origin of this symbols, and historians still debate about the true one. And the cats are watching the city from the tower tops.

The Three Brothers introduce us to the traditional architecture of the medieval Riga. These are the oldest residential complex in the city. The White brother with the gothic steps on the roof is the oldest one with the unique stone benches at the door. The Middle brother is also middle of age. It features the Dutch architectural Mannerism with elegant window tops and unusual roof. The Green brother is the youngest. It features the strict but charming early baroque with the traditional Gable.

The granite and copper monument in the center of Riga symbolizes Latvian statehood, national unity, independence and freedom.

The clock was built in 1924 for practical reasons - in order to let Riga people to be at work in time. After the Second World War the clock during long period of time was used as political information stand. In 1999 the clock has gone through the total reconstruction, brining back the looks it had in 30s.

The Riga Ghetto and Holocoust museum is a courtyard between Maskavas and Krasta streets. Its main feature is an ominously long wall covered with the names of victims of the Holocaust in Latvia. You can also look at Nazi propaganda, horrifying photos of tortured bodies, stills of ghetto life and grainy black and whites of old synagogues across the country, most of which no longer exist.
(Note: donation required)

Confirmation will be received at time of booking.
Near public transportation.
Not wheelchair accessible.
Travelers should have a moderate physical fitness level.
This is a private tour/activity. Only your group will participate