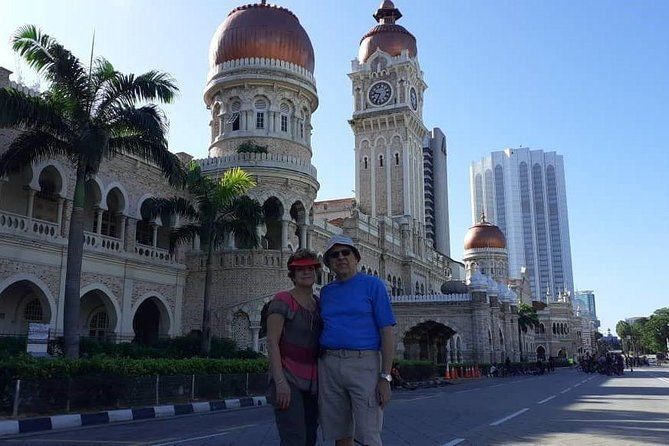 Lively, colorful Chinatown is centered on Petaling Street, known for its fashion shops and a large covered market with produce, clothes and accessories

Bustling shopping district with haggling vendors offering a range of goods, from clothing to food.

It was founded in 1888 and originally used as a wet market while the current Art Deco style building was completed in 1937. It has been classified as a Heritage Site by the Malaysian Heritage Society and it is now a landmark for Malaysian culture and heritage.

The Royal Museum is located in the old National Palace, or Istana Negara which,from 1957 until 2011, was the official residence of the King and Queen of Malaysia

The Istana Negara is the official residence of the Yang di-Pertuan Agong (King),the monarch of Malaysia.

The National Monument is a sculpture that commemorates those who died in Malaysia's struggle for freedom, principally against the Japanese occupation during World War II and the Malayan Emergency, which lasted from 1948 until 1960.

ASEAN Sculpture Garden is a garden in Kuala Lumpur, Malaysia, situated adjacent to the National Monument and in the vicinity of the Lake Gardens. It is a landscaped garden with a collection of prize-winning sculptures in wood, marble, iron and bamboo.

Verdant, peaceful Lake Gardens is home to the Perdana Botanical Garden, a sprawling park with tree-lined walking trails, orchid and hibiscus displays, as well as a planetarium.

A gated attraction, Kuala Lumpur Bird Park is a 20.9-acre (8.5 ha) public aviary in Kuala Lumpur, Malaysia. It is a popular tourist attraction in the country. The Bird Park houses more than 3,000 birds representing more than 200 species in an enclosed aviary. About 90% are local birds and 10% were imported from countries such as Australia, China, Holland, Indonesia, New Guinea, Tanzania and Thailand.

The Islamic Arts Museum contains centuries-old manuscripts, while jewelry and heritage locomotives are on display at the nearby National Museum.

The National Mosque of Malaysia is a mosque in Kuala Lumpur. It has a capacity for 15,000 people and is situated among 13 acres of gardens.
It has a unique stylised, star-shaped dome representing the 13 states of Malaysia and the five pillars of Islam. It's 73-metre-high minaret stands impressively against the skyline. Within its beautifully landscaped grounds are pools and fountains. VIsitors are required to be appropriately dressed while visiting the mosque. Robes and headscarves will be provided for ladies.
Note-

it provides an overview of Malaysian history and culture. Its facade comprises elements of traditional Malay and modern features. It was opened on 31 August 1963 and it serves as a repository of Malaysia's rich cultural and historical heritage.

Note: Subject to Drivers Route on the Day.

Merdeka Square is a square located in Kuala Lumpur, Malaysia. It is situated in front of the Sultan Abdul Samad Building.
Literally Independence Square, it was formerly known as the Selangor Club Padang or simply the "Padang" and was used as the cricket green of the Selangor Club.

The Royal Selangor Club is a social club in Kuala Lumpur, founded in 1884 by the British who ruled Malaya. The club is situated next to the Dataran Merdeka

Designed by Arthur Benison Hub back in an Indo-Saracenic Revival architecture, the building was originally completed in 1905 to house the headquarters.

Jamek Mosque, officially Sultan Abdul Samad Jamek Mosque, is one of the oldest mosques in Kuala Lumpur, Malaysia. It is located at the confluence of the Klang and Gombak River.

The Thean Hou Temple is a six-tiered temple of the Chinese sea goddess Mazu located in Kuala Lumpur, Malaysia. It is located on 1.67 acres of land atop Robson Heights on Lorong Bellamy, overlooking Jalan Syed Putra

Note: If you are not interesting, please inform to driver on the day.

A Unique Chocolate MUST Try in Malaysia

Confirmation will be received at time of booking.
Not wheelchair accessible.
Near public transportation.
Infants must sit on laps.
Most travelers can participate.
This is a private tour/activity. Only your group will participate