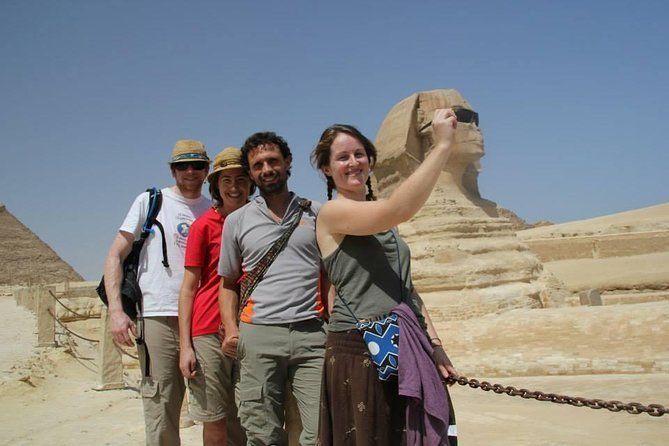 Start your private day tour with Multilingual Egyptologist tour guide to visiting the Great Pyramids - Cheops, Chephren and Mykerinos and have a close-up look at the Sphinx. The legendary guardian that stands by the huge funeral complex with its lion body and the head of king Chephren. Then moving 27 Km south-West away from Cairo to Visit the Pyramids of Sakkara.

Visit the Step Pyramid (Built for king Zoser), it is considered an important part in the process of the pyramid evolution. Then visit to the pyramids of Unna's & Oser-Kaf, the tomb of Mereruka, Ti & Pta-Hotep (Carved and painted tombs) after that moving to visit Memphis. Which was believed to be under the protection of the god Ptah, the patron of craftsmen. Its great temple, Hut-ka-Ptah (meaning "Enclosure of the ka of Ptah"), was one of the most prominent structures in the city. The name of this temple, rendered in Greek as Aί γυ πτoς (Ai-gy-ptos) by the historian Manetho, is believed to be the etymological origin of the modern English name Egypt.return back to your meeting point.

I love that tour. Jose is our Portuguese guide, he is awesome. I learned a lot. it's a lot of culture and history. I recommended.

The tour was decent. But, we spent too much time at shops instead of the historical sites. Avoid the tourist traps.

We had booked this Viator tour online and it was assigned to Egypt Direct by Viator. Egypt Direct is a very professional Company. Our Guide, Ms Maha, was at the hotel lobby exactly at the agreed time with a placard of our name. They had provided a dedicated car and a driver for the entire tour. Ms Maha is a young, energetic, enthusiastic and knowledgeable guide She managed the time very well, understood our requirements and was fluent in communication. We covered all the four attractions (Giza Pyramids, Sphinx, Sakkara and Memphis) within the agreed time frame without rushing or hurrying anywhere. The restaurant where we were taken for lunch was also a good experience. They played traditional music while entering or leaving the restaurant. They served vegetarian food. More importantly the food is unlimited and you can always ask for more. I will strongly recommend Egypt Direct as tour operator as they were called before and after the tour to ensure that everything was in order and if we were satisfied. I will also recommend Ms Maha as guide because of her job knowledge, hospitality, mannerism and dedication.

My tour guide Nasser and driver, Yousry from Kenner Egypt travel were AMAZING!! Nasser was extremely knowledgeable on all the sites and was pleasantly protective when dealing with over zealous merchants and extremely helpful in making sure my tips were appropriate. He was very flexible with the tour and always made sure I was enjoying my day. The driver was dependable and skillful in navigating the busy streets of Cairo, he always dropped us right in front of the attractions and was was there as soon as we stepped out. I was nervous traveling by myself but these two were the perfect guides, highly recommend. If you take a camel ride at the pyramids, Sheriffe and his amazing camel Pepsi are the only way to go.

We had a fantastic day with our tour guide shirin she took us back in time with her detailed descriptions of ancient egypt everything was perfect from the moment we sat in the car i highly recommend her as a tour guide. And the food was delicious! Thanks shirin.. stefano and shiva

My tour guide was excellent and was very knowledgeable about the history of all the places we visited. The lunch was fantastic an the sites were amazing. I would highly recommend this tour.

As two ladies travelling together ,we requested that we would like a lady guide. Our guide, Maha, was delightful and informative. We were interested in the architecture and the terrain and Maha absolutely concentrated on this. Our lunch, which she had arranged was delicious and she also arranged that we stop for fresh mango juice. We could not recommend her more highly.

My wife and I were in Dubai and decided last minute to hop over to Egypt and see some of the sites and take in some of the culture. I booked the weekend trip on Travelocity the night before we left. I wanted my wife to see as much as we could without having the time to plan it. I am not much of a people person and am not keen on riding a bus with a bunch of strangers. As luck would have it, I saw an ad on Travelocity for a personalized tour 2-5 persons since we only had two people the tour was just for 2 for a very reasonable price booked through Viator. I figured why not try it. I am so glad I did. The day we were flying the day before the guided tour to Cairo, I received an email letting me know our Tour Guide would be in the lobby holding sign with our name on it at 0830 the morning of the tour. As advertised, the Tour Guide Nasser and the driver Jarone were awaiting us in the lobby at 0830 sharp!. Nasser and Jarone were extremely professional, courteous, and ensured they opened and closed the door each and every time we entered or exited the private vehicle, the restaurant meal included in the deal, and all of the places we went. We visited Giza, Sakkara, and Memphis City and saw so many things pyramids, Sphinx, paper factory, perfume factory, and took a camel ride. There is no way we could have ever planned and executed all of this in our three day trip, much less in 8 hours length of the private tour, we were amazed. It was so nice to pull up to the entrance of each of the sites and have the doors of the vehicle opened for us. Nasser escorted us through security and the entrance, walking us past all of the herds of people like we were stars. Nasser told us throughout the day what we would be doing and where we would be eating and let us decide if we were good with everything or if we would like to modify any part of the trip such as the lunch spot... My wife is vegetarian so we asked to go to a restaurant at which she would have plenty to eat. Nasser did just that, he changed the lunch venue and we had the most amazing lunch I am not vegetarian, but they had a buffet that had both vegetarian and meat dishes. It was absolutely delicious and very filling. I would have paid three times what we paid for this tour and Nasser and Jarone were so warm and friendly. This was the perfect way to see so many parts of history and culture that I cannot explain how special this was with just words. As a side note, since we had just arrived in Egypt, we did not have any local currency and did not have a chance to go to an ATM. Nasser told us not to worry, he had plenty of cash and would pay for whatever we needed souvenirs, drinks with our meal, came ride, special tour of a tomb in a pyramid, etc. up front and we could reimburse him after the tour. He did just that without any ulterior motive. At the end of the day, Nasser stopped by an ATM so we could withdraw some Egyptian Ponds and pay the tab we had run up purchasing extra goodies. After the tour, Nasser and Jarone dropped us off at our Hotel, carried our bags in for us and gave us gifts. What a very nice and unexpected touch. We are now planing on bringing our daughters back to Egypt with us for Spring Break next year and we will be seeing Nasser and Jarone again on another personalized tour!

Great deal for the price - a private guide and driver for the full day. My guide was super-friendly, knowledgeable, and flexible when I told him I wasn't very interested in shopping, he skipped that and we spent more time in Sakkara. It was also great to drive past all the checkpoints and park up close, and have an air-conditioned car waiting close by after each stop. The guide also did a good job of keeping away all the people trying to sell Chinese-made souvenirs or asking for tips. Definitely recommend Viator and Kemet Egypt Travel.

Kemet Tours was amazing, and our guide Nasser was the best we could have asked for. My husband daughter and I felt safe the whole time we were with the guide, and he treated us like family. Nasser was very knowledgeable in all the locations we visited and was an excellent tour guide. He even bought us a mango juice at the end of our day. We highly recommend Kemet Tours, and you would be lucky to get Nasser as your tour guide!

My guide spoke good English, knowledgeable, friendly, fun. He was on time and I didn't feel rushed. Lunch was enjoyable and overall the tour was great. Thanks!

Excellent Tour.
Nasser was my guide. His English is great and very informative. He made sure that I had a good time. Nasser also knows the locals so we entered tombs that others could not.
I definitely recommend this tour to everyone.
Also, despite what people think, Egypt is very safe for tourists.