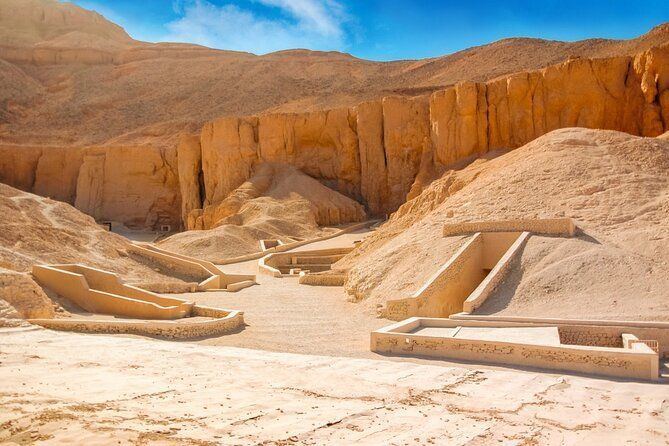 Discover the highlights of ancient Luxor, a UNESCO World Heritage Site, on this 14-hour private day trip by road from Marsa Alam. See the Valley of the Kings including the Tomb of King Tutankhamun, where dynasties of pharaohs were laid to rest, the vast complex known as the Temple of Karnak, Queen Hatshepshut Temple, and the giant statues called the Colossi of Memnon. Tour includes entrance fees and lunch.

Discover the highlights of ancient Luxor, a UNESCO World Heritage Site, on this 14-hour private day trip by road from Marsa Alam. See the Valley of the Kings including the Tomb of King Tutankhamun, where dynasties of pharaohs were laid to rest, the vast complex known as the Temple of Karnak, Queen Hatshepshut Temple, and the giant statues called the Colossi of Memnon. Tour includes entrance fees and lunch.

Your personal driver will collect you from your hotel in Marsa Alam around 5 AM in a private, air-conditioned vehicle. It's a little over four hours to Luxor, where you'll meet your private Egyptologist guide and begin your tour.

This tour includes a qualified Egyptologist tour guide, transport by air-conditioned vehicle, all entrance fees for the mentioned sites, lunch, hotel pick up and drop off, and excludes any extras not mentioned and gratuities.

Start on the East Bank of the Nile, at the Temple of Karnak, a complex of temples built over thousands of years. Your guide will lead you through the Avenue of Sphinxes, which once connected Karnak and Luxor temples.
Enjoy an early lunch before you drive across the Nile to the West Bank, to visit the famous Valley of the Kings, where many dynasties of pharaohs were buried in gorgeously decorated tombs. Here, you'll visit three tombs plus the Tomb of the famous King Tutakhamun and take in the atmosphere of the dramatic sandstone gorge.

Your next stop is Queen Hatshepshut Temple, the only woman ever to reign over Egypt as pharaoh, where your Egyptologist guide will steer you through the highlights.

Temple of Amun, also known as Karnak Temples. You visit what is considered to be one of the world's greatest architectural masterpieces, namely the complex of Karnak Temples on the East Bank of Luxor. Karnak is a complex of temples built in different reigns, starting with the Avenue of Sphinxes, the Hypostyle Hall with its 134 gigantic columns, the Obelisks of Queen Hatshepsut and Tutomosis I, the Temple of Amon adorned with lotus and papyrus designs, the Granite Scarbeus of Amenophis III and the Sacred Lake. Karnak beats every other pharaonic monument: it is simply one of the most beautiful ancient monuments in Egypt

Luxor Temple, which is dedicated to the Theben Triad of Amun-Ra, Mut and Khonsu. There you will see the granite statues of Ramses the Great. These ancient temples are a must-see for Luxor travelers.

First you will be transported to the Necropolis of Thebes, the Valley of the Kings on the West Bank of Luxor. This ancient necropolis is a must-see for Luxor travelers. It consists of tombs embedded in the mountain Thebes. Here, you visit 3 tombs of various dynasties. Your Egyptologist tour guide will be on hand to recommend and advise you as to which tombs to visit

The tomb of Ramesses III, designated as KV 11, is a complex system in the Valley of the Kings. It has been known since antiquity,the wonderful decorations include colourful painted sunken reliefs featuring the traditional ritual texts (Litany of Ra, Book of Gates etc) and Ramses before the gods. Unusual here are the secular scenes, in the small side rooms of the entrance corridor, showing foreign tributes, such as highly detailed pottery imported from the Aegean, the royal armoury, boats and, in the last of these side chambers, the blind harpists that gave the tomb one of its alternative names: ‘Tomb of the Harpers’

Stop At: Tomb of Ramases IX, Valley of the Kings., Luxor Egypt

Tomb of King Ramesses lX was the third pharaoh of the Twentieth Dynasty of the New Kingdom of Ancient Egypt. His name prior to assuming the crown was Amonhirkhopshef. He was the fifth son of Ramesses III and was appointed to the position of crown prince by the twenty-second year of his father's reign when all four of his elder brothers predeceased his promotion to crown prince .
The tomb has so much colour and detail even the ceiling above the sarcophagi with its goddess Nut stretching across the space. The sarcophagus is one of the largest in the valley, even though some of the paintings have deteriorated this is one of the most decorated.

In Egyptian mythology, Ptah is the demiurge of Memphis, god of craftsmen and architects. In the or simply in its falcon form of the new deity, began to be placed in tombs to accompany and protect the dead on their journey to the West of Luxor .Tomb 8, which is located in the Valley of the Kings, was the burial place of the Pharaoh Merneptah and is the model of royal tombs Merneptah was a son of Ramesses II and Queen Isis-Nofret.the tomb was discovered by Howard Carter in 1903. Of coursethere is a material decrease in the number of lateral rooms, and a dramatic increase in the height of the corridors and rooms. He did away with the jogged axis used since the time of Horemheb and instead built the entire tomb on a single axis. Also, for the first time, the entrance was made considerably wider than earlier tombs .

Entrance fees to the tomb of Tutankhamun300.00 EGP) (optional)
King Tutankhamun, the most famous king in the world. This young king from the New Kingdom was around 10 years old when he ascended the throne and died when he was only 19. You will get the chance to be face to face with his royal mummy in his tomb in the Valley of the Kings

the Colossi of Memnon, the two largest ancient statues in Egypt, which date back to the era of King Amenhotep III.