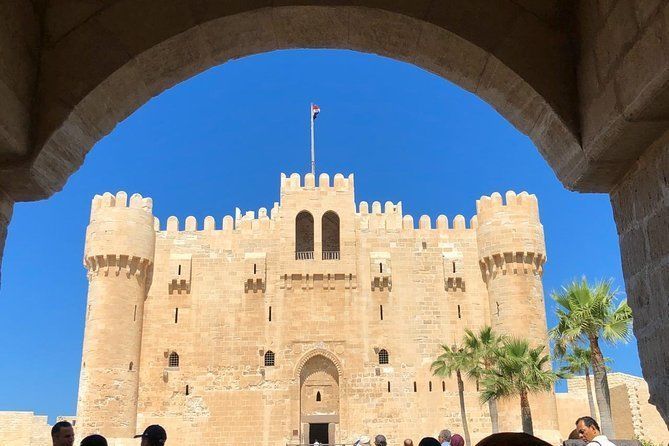 Alameinto see the memorial cemetery and museum from this famous battle. Returning to

Alexandria you will visit the

Qaitbey Citadel and other sites around Alexandria before returning to port.

Alameinto see the memorial cemetery and museum from this famous battle. Returning to

Alexandria you will visit the

Qaitbey Citadel and other sites around Alexandria before returning to port.

Sun Pyramids Tours Guide will pick you up from your hotel, then you will travel to Alamein. Proceed to World War II remains and cemeteries. Your first stop will be at the Military Museum including displays of weapons, military garb and tanks. Descriptions of the actions of Montgomery, Rommel and the others participated in the battle are also on display. Continue to visit the WWII Cemeteries, located on the west of the town, on a small peninsula overlooking the sea. The citadel like cemeteries is the final resting place for Common wealth, Greek, Italian and German soldiers.

Drive to Alexandria where you will see the Pompay’s pillar. Then proceed to Qaitbay Citadelfrom outside which was built on the site of the ancient pharohs ( lighthouse ) of Alexandria. Visit the Catacombs which are the largest Roman Cemetery consisting of three levels cut in the rock. After finishing the day tour, you will return to hotel.

Confirmation will be received at time of booking.
Not wheelchair accessible.
Minimum drinking age is 18 years.
Availability for shows cannot be checked without making a booking. Credit cards will only be charged upon confirmation of show availability.
This is a private tour/activity. Only your group will participate.
Face masks required for travelers in public areas.
Face masks required for guides in public areas.
Face masks provided for travelers.
Hand sanitizer available to travelers and staff.
Social distancing enforced throughout experience.
Regularly sanitized high-traffic areas.
Gear/equipment sanitized between use.
Transportation vehicles regularly sanitized.
Guides required to regularly wash hands.
Regular temperature checks for staff.
Temperature checks for travelers upon arrival.
Paid stay-at-home policy for staff with symptoms.
Contactless payments for gratuities and add-ons