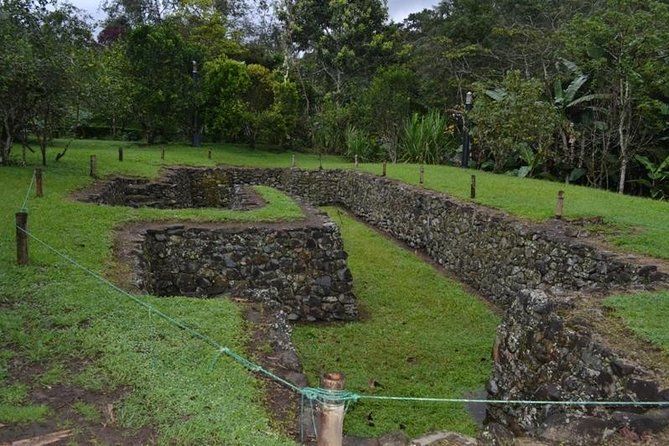 Embark on 8-hours of adventure with this tour of the pre-Incan culture in Ecuador. Discover the burial ceremonies and rituals geared towards death with your private guide. See ancient tombs and plots in Rumipamba Archaeological Museum and Tulipe valley until it is time to return to Quito.

Embark on 8-hours of adventure with this tour of the pre-Incan culture in Ecuador. Discover the burial ceremonies and rituals geared towards death with your private guide. See ancient tombs and plots in Rumipamba Archaeological Museum and Tulipe valley until it is time to return to Quito.

This Natural and archaeological museum are evidence of Quitu culture, and even older cultures of our Ecuadorian Aboriginal history and cultures that inhabited Rumipamba in discontinuous way throughout history.

Rumipamba, quichwa word which means pampa or "plain of stone", is a Museum in situ whose traces correspond to many archaeological periods, among which are: remains of the period known as the “Late Formative”, from 1500 B.C to 500 B.C studied through the ceramic remains evidence of this dating. There are vestiges of the next period called "Regional development", from 500 B.C. to 500 A.C., characterized by the presence of tombs and associated with fragments of drilled tripods dishes and variety of pottery found on the site.

The Tulipe Archaeological Site-Museum in Ecuador was originally built by the Yumbo people who lived in the valleys and mountains surrounding Quito between 800 and 1660 AD. No one really knows what happened to these ancient people, but it is surmised that they might have migrated to the Amazon basin after the Pichincha Volcano erupted in 1660, destroying much and certainly striking fear into many people in the area at that time. Regardless of what happened, what is certain is that the Yumbo people left behind them a significant archaeological find at the Tulipe Archaeological Site. Originally their ruins were disregarded by Spanish chroniclers and other historians. Fortunately, times and opinions have changed and some 2000 pyramids and mounts have now been unearthed at this site.

Confirmation will be received at time of booking.
Passport name, number, expiry and country is required at time of booking for all participants.
Operates in all weather conditions, please dress appropriately.
A minimum of 2 people per booking is required.
Not wheelchair accessible.
Most travelers can participate.
This is a private tour/activity. Only your group will participate.
Face masks required for travelers in public areas.
Face masks required for guides in public areas.
Face masks provided for travelers.
Hand sanitizer available to travelers and staff.
Social distancing enforced throughout experience.
Regularly sanitized high-traffic areas.
Transportation vehicles regularly sanitized.
Guides required to regularly wash hands.
Regular temperature checks for staff

Not worth it! Too expensive for less than 15 minute tour of the museums.