Experience a 2-hour tour of the ancient ruins of Pompeii led by a professional archaeologist guide and skip the line tickets included in a small group of maximum 20 people.
Walk through the ruins and explore this ancient city, buried by Vesuvius in 79 AD. Learn about the history of the town and how the Romans lived and see all the most important public buildings and private houses.

Visit the Western part of the town. You will see the Marina Gate, the Basilica, the Forum, the baths, the Lupanar (brothel), the bakery, the house of Faun, the Termopolium, the main street, the Plaster Casts of the dead's, and the Theaters.

The tour is available in English, Italian, French, Spanish and German and start at the main entrance of Pompeii Ruins, called Porta Marina Superiore.

Experience a 2-hour tour of the ancient ruins of Pompeii led by a professional archaeologist guide and skip the line tickets included in a small group of maximum 20 people.
Walk through the ruins and explore this ancient city, buried by Vesuvius in 79 AD. Learn about the history of the town and how the Romans lived and see all the most important public buildings and private houses.

Visit the Western part of the town. You will see the Marina Gate, the Basilica, the Forum, the baths, the Lupanar (brothel), the bakery, the house of Faun, the Termopolium, the main street, the Plaster Casts of the dead's, and the Theaters.

The tour is available in English, Italian, French, Spanish and German and start at the main entrance of Pompeii Ruins, called Porta Marina Superiore. 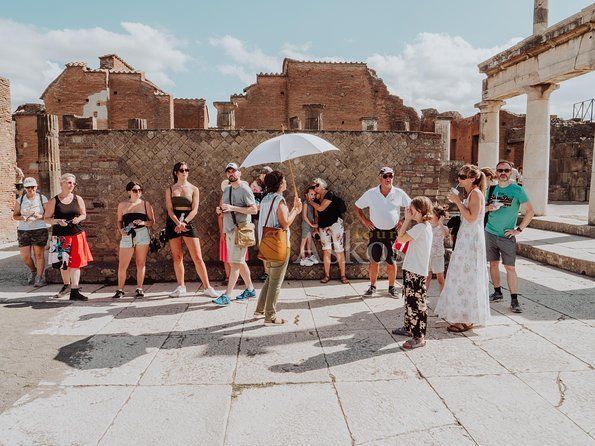 Meet the guide at the main entrance of the archaeological site called "Porta Marina Superiore". The guide will be holding a sign with our company's name "Askos Tours" on the top.

Have a look of the ancient main square of Pompeii

Walk through the main street of Pompeii

In the granary you will see marble tables and baths for fountains that adorned the entrances of houses and some casts of victims of the eruption as well as that of a dog and a tree.

The house of Menander is one of the richest and most magnificent houses in ancient Pompeii in terms of architecture, decoration and contents

These occupy a vast area between the Brothel lane, the Holconius crossroads and the Via Stabiana. They represent the oldest thermal complex in the city

Have a look of the so called Teatro Piccolo of Pompeii

Stop At: Teatro Grande, Via Paganora 19/A, Pompeii Italy

Visit the most important Theater in Pompeii

Confirmation will be received at time of booking.
Not wheelchair accessible.
Tour will be available all year around with rain or shine.
Children must be accompanied by an adult.
Wear comfortable shoes, sunglasses and sunscreen in the summer..
Bring a small bottle of water.
Service animals allowed.
Near public transportation.
For under18 y.o. travelers, please bring your ID card/passport with you.
Travelers should have a moderate physical fitness level.
This tour/activity will have a maximum of 20 travelers.
Face masks required for travelers in public areas.
Face masks required for guides in public areas.
Social distancing enforced throughout experience.
Temperature checks for travelers upon arrival.
Access to the site is subjected to the detection of visitors' body temperature in order to reduce and limit the COVID-19 infection: whoever will present a body temperature equal to or greater than 37.5 ° C and / or with obvious symptoms of contagion won’t be admitted

Teresa was a well spoken and knowledgeable guide. She gave us a complete picture of Pompeii and the disaster. Great tour. I highly recommend this company for your Pompeii tour.

Anna was a fantastic guide. She was knowledgeable and informative. She knew answers to all of our questions and put up with our other group members gracefully and with patience. I highly recommend booking with Anna.

Mind blowing. Normally I have lots of questions to ask on tours, but Michele is such a good guide and storyteller, I didn't want to interrupt. By the end of the 2-hour tour, it felt like I had to sit down and digest all the information. It was all so insightful and interesting! No questions to ask afterwards. Fantastic tour.

Loved it! I was captivated from start to finish by our guide Michele and all the facts, anecdotes and stories he shared with us. This tour is a fantastic way to start your visit and get all the knowledge and tips needed to enjoy exploring the rest of Pompei on your own. Can't recommend enough!

Happened to book this experience during a rainy day but Ivan really came through and made this experience a pleasurable one. He was incredibly knowledgeable about the ins and outs of Pompeii and gave use background info on everything that made it come to life that much more. It was also nice having the place almost all to ourselves. Highly recommend!

Anna Laura was an excellent guide, very knowledgeable, patient and helpful. She had a lot of insights on things you wouldn't expect about Pompeii. Exceeded what I was expecting by far.

The experience of the guide was excellent and really laid the foundation for the rest of the day. We could not give 5 stars for two reasons; 1) The bluetooth headsets were hard to use as they did not attach to the ears very well (especially if you are wearing hearing aids) and the guide's microphone was below his lapel so when he would turn his head the sound would fade and 2) It seemed rushed towards the end of the tour. We are in our late 60's so it was difficult to keep up the last 15 minutes of the tour.

Pompeii is an amazingly huge archeological site that need a guide to give you a good background. Antonia did exactly that, he was so passionate about his work that he requested for more time so that he can cover more. Totally impress with his professionalism.

I liked the whole trip , it was an amazing experience, and the guide was so prof’ and the explanation was so clear

Anna Sorrento was a great tour guide. She was a real archeologist, turned tour guide. The ruins are amazing, but a verbal description of the story, culture, history, and excavation of the ruins adds color to the experience. For example, if Anna didn't tell us how to determine the shops from eateries and bakeries (of the time), we wouldn't have known. All around a great tour. It only takes you through the most commonly visited 1/4 of the ruins. Get the morning tour, and stick around all day. Do Vesuvius on another day!

Got to visit the city from a different side. Very knowledgeable guide. Always new sites and houses to visit

Ivan was awesome. Really enjoyed our tour. He is very knowledgeable and was easily able to answer all of the random questions we threw at him. It was nice to book in advance and be sure we could get in when we wanted, and get an experienced guide. I think he hit the main things we were interested in, but not so much as to lose the attention of our younger kids. I recommend this company and Ivan!

Antonio was a great guide both in terms of knowledge and answering questions and the logistics of guiding. The earphones were good once working properly. Group was bigger than I thought it would be since the tour cost more than others

Anna is an amazing guide. She is funny and has a great sense of humor. She is also very passionate about her work around Pompeii. We had a great time with her during the tour. We actually ended up spending more than 2 hrs, as she wanted us to show the highlights and not leave anything behind. Pompeii is an amazing site, massive and impossible to see in a few hrs. After our tour we saw a few more sites that Anna had recommended. Overall a great experience, highly recommended. We will be back again.

John Nkengasong, the Africa CDC Director, noted that South Africa had a younger population than the West and that the omicron variant had only been recently detected.

This tour is amazing. Having a trained and experienced Archeologist to explain what you are seeing in real time is great, them being able to answer any and every questions is amazing. Daniella, our guide, was so passionate about every aspect we saw and was great at explaining the significance of what we were seeing. I highly recommend selecting this tour for your time.

Wonderful afternoon! Our guide was super knowledgeable,!friendly, and provided. Great first time experience. Looking forward to the next trip!

Great tour, very informative, took the the time answer questions and she was extremely knowledgeable about the Pompeii site.

Ivan was awesome! He was well informed on the entire park, and he was able to answer every question the group had for him. Ivan was also very welcoming and entertaining through out the experience. He checked on sites that were under excavation to see if they were open, and found out one of the sites had just opened.

We had a great experience with Diego. He was very knowledgeable and engaging and told the group about the ruins as well as other things in Naples.

Very informative. I was impressed with the tour and our guide. I recommend small group tour to anyone who wants an immersive experience. You can easily imagined walking through the city as it once was.