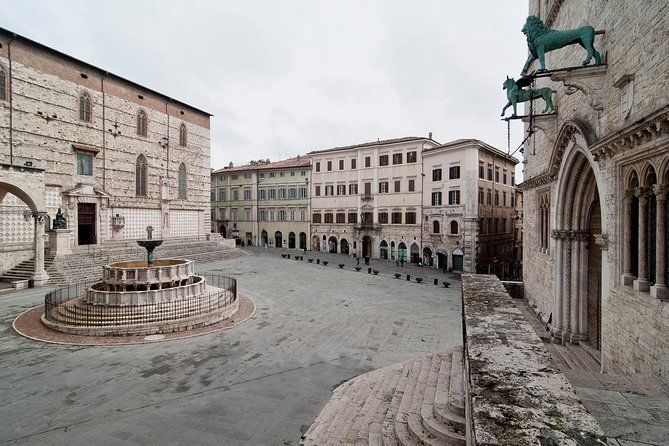 Perugia is the capital of Umbria and one of the local hill towns. It is a city full of charme and history. With your private guide you will walk along its city wall dating from the Etruscan age, get lost in the symbols carved by Nicola and Giovanni Pisano's into the Fontana Maggiore and find yourself fascinated by the many layers of the Rocca Paolina.

Perugia is the capital of Umbria and one of the local hill towns. It is a city full of charme and history. With your private guide you will walk along its city wall dating from the Etruscan age, get lost in the symbols carved by Nicola and Giovanni Pisano's into the Fontana Maggiore and find yourself fascinated by the many layers of the Rocca Paolina.

The Rocca Paolina, or Paolina Fortress, is right in the historical centre of Perugia and one can enter via a door at Porta Marzia or the escalator system that connects Piazza Italia with Piazza Partigiani.

Perugia, the regional capital, is an ancient city located in central-northern Umbria. The historic center is built on the high hills along the right bank of the Tiber River

The upper marble basin has twelve sides divided into twenty-four smooth panels of pink Assisi stone. Each one is separated by an equal number of white Carrara marble statuettes set on ledges between the panels. Some of the figures represent personages from the history of the city and legends, while others are symbolic.

Perugia is a city full of charme and history. Every ancient gate, alley, piazza, palazzo and church will capture your imagination; and every museum and gallery will impress you with a sense of history, culture and art. Perugia is not just a stuffy old showcase of the ancient, it also has a young, vibrant and energetic feel. Perugia is the site of many festivals and concerts, the most important of which are the annual fall Chocolate festival and the summer Umbria Jazz festival, lending the city to a chic and urbane atmosphere unmatched by other Italian cities.

Meeting point will be at Piazza Italia, from there we will go first exploring the different strata of Rocca Paolina – the so called 'Perugia underground'. Once back to the city centre, there will be a stop at a famous old fashioned but very traditional coffee shop for an espresso or a cappuccino topped with hand whipped cream.

The tour will focus on the main fountain – Fontana Maggiore – together with the other buildings standing in the square.

The Cathedral of St. Lawrence is located in the historical centre of Perugia on Piazza IV Novembre, its southern façade facing the square.

Confirmation will be received at time of booking.
The price displayed is for a private tour of up to 15 people.
Not wheelchair accessible.
Near public transportation.
Most travelers can participate.
This is a private tour/activity. Only your group will participate

A well travelled local who is proud to call Perugia home gave great narrative of this Etruscan gem. Starting at the fort of Rocco Paolina, and ending at the Fontana Maggiore, my guide explained every detail in great depth. Highly recommended

We took the train from Assisi to Perugia. It took about 15-20 minutes to get there. You can actually see Perugia from Assisi and vice versa. Once off the train, a ticket to the tram may be purchased at the train station lounge area. To get to the tram, simply walk down the train ramp number 1 going into town and follow the signage to the tram. The ticket opens the gates to let you into the area to catch the tram. You also need to hold onto the ticket to get out of the tram station, again inserting the ticket so that the gates will open to let you out. The views from the tram are quite beautiful. There is a point that you are in a tunnel for awhile. Once out of the station, you are atop an incredible hill an outstanding view of the valley.

We had the distinct pleasure of having Michele of Umbria ConME provide us with the talking tour. Yes, the same tour guide, who gave us a wonderful account of Assisi just two days prior see review Small Group Tour of Assisi.

Michele was especially excited about presenting this tour. He said that about 80 of the tours that he leads are in neighboring Assisi, so he is always glad to showcase his hometown, Perugia.

Perugia is a dynamic city. It has an old history, a university town and a sense of distinct neighborhoods, where as beautiful as Assisi is, it is all totally white and uniform in architecture with the exception of the Roman holdover, Miverva Temple. It is also famous for its chocolate!

Perugia, like many of the old Umbrian towns is located atop of a bluff. Perugia is much older than many of the Umbrian towns and much of the old walls that date back to the Etruscan times can still be seen. Michele explained the difference in the settling of Umbrians versus the Etruscans. The nearby Tiber River was the major land divide between the two early settlers in this area. The Umbrians mainly worked the land and were shepherds. The Umbrians did not have cities or towns. The Etruscans were a much more advanced civilization. They developed cities that included arches, aqueducts, cisterns, water wells and the like. We were shown an Etruscan arch that the Romans learned to recreate from these folks.

As a result, Perugia has been a city that predates the Roman occupation. The Perugians were an aggressive type of people, who often fought other city-states as Siena, Gubbio and Assisi over the years. Perugia also fought the Papacy over the years. As a result, the architecture is missing some of the early Renaissance style seen in Florence and elsewhere in Italy. The Papacy punished Perugia by building over an entire section of the city hence its underground was born.

Michele was wonderful in telling us all the history and how it tied into the architecture, the city layout, and so forth.

We toured an ancient Romanesque church in the round that is on the edge of the city, where the grounds offer fantastic views of the rest of the city and the valley below. We walked along what was an old aqueduct that ran down and then uphill to the main square where a major fountain exists. Today, the aqueduct is used a pathway to cross from one section of the city to another without having to go down a steep hill and walk back-up. There is also a major street where trendy stores, cafes, outdoor restaurants are located.

Michele did take us to the underground that was mentioned earlier. This area has been recently restored and is in a continuing phase of renovation. It had been sealed off for years. In about the last 20-25 years, the mayor of Perugia decided to open it up. So, he moved lots of money toward its restoration. It is now a partial museum, few shops and a great place to see how the punished folks lived when the Papacy decided to seek its revenge.

The main square, where the old aqueduct emptied into the fountain, is quite an exquisite square in itself. It houses the old magnificent cathedral with the secret altar, the detailed fountain that Michele will be happy to explain it to you, as well as the beautifully painted frescoed building that hosted the city business and meetings.

Overall, you will enjoy Perugia. It is definitely a lively town, with its own independence and sense of worth. The colorful history, architecture, narrow streets and extended sections of the city, make it a wonderful place to explore. Micheles English is excellent. He loves questions. It shows you have an interest and care about what he is talking about. He will enthusiastically answer them for you!

Again, thank you, Michele, for a wonderful day and tour!

Perugia, what a city! Beautiful! And our private walkng tour was excellent!
Best way to know the history of the city!