One day to Sohag monasteries 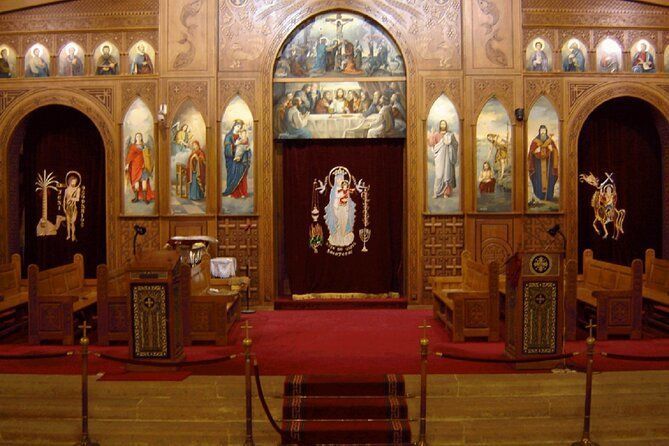 One day to Sohag monasteries

Day 1One day to Sohag monasteries
A guide will take you from your hotel in Luxor to start your Coptic tour to Sohag , you will start your tour by visiting the Saint Anba Shenouda Monastery (White Monastery)
Saint Anba Shenouda Monastery, Head of the Unitarians in the Western Mountain (White Monastery). The monastery is located west of Sohag and there is an asphalt road 2 km before the monastery.
The church was built in the year 441 AD in the era of St. Shenouda, the Archimandrite to be one of the greatest churches in Egypt and has an Egyptian character. In the buildings there are some pharaonic stones and ornaments . Some traditions tell that St. Anba Shenouda is buried inside the present monastery
Take a short break for lunch at a local restaurant
Our next step will be in Saint Anba Beshay Monastery ( The red monastery) in the Western Mountain
The monastery is 4 km north of St. Shenouda Monastery, It is very similar to St. Shenouda Monastery
The church dates back to the early 6th century AD. In the eastern tribal corner of the church is the old fort with its bathtub .The door is surmounted by exquisite floral motifs ,In the tribal corner, a modern church was built for the Virgin Mary covered with domes.
This monastery was an extension of the wilderness which was headed by St. Anba Shenouda, the Archimandrite, Where he was under his presidency about three thousand monks .. The Anba Beshay or Anba Begol is the uncle of St. Shenouda autistic head. The monastery witnessed an urban renaissance at the beginning of the 21st century . Many icons and archaeological conditions were renovated with the help of some European missions and under the supervision of the Egyptian Antiquities Authority

After finishing your tour, you will be transferred to your hotel in Luxor

Confirmation will be received at time of booking.
Not wheelchair accessible.
Stroller accessible.
Near public transportation.
Infant seats available.
Most travelers can participate.
This is a private tour/activity. Only your group will participate