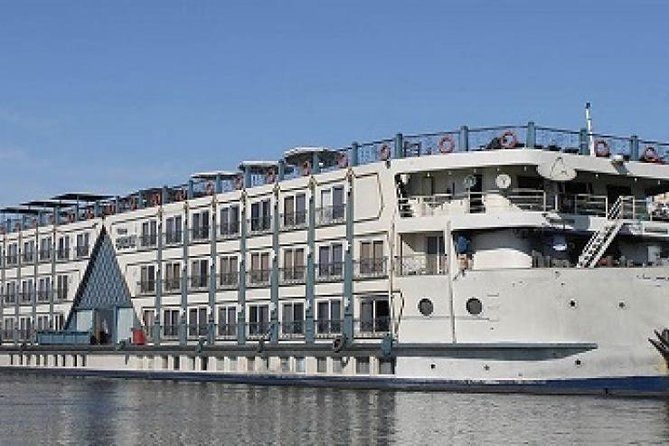 This 4-day cruise down the Nile River easily becomes the highlight of any Egypt vacation. Admire sights as you float down the iconic river on an all-inclusive tour with meals and accommodation, stopping to explore temples, , cities, and sights. Top of your tour with a visit to the Valley of the Kings before completing your trip in Luxor.

This 4-day cruise down the Nile River easily becomes the highlight of any Egypt vacation. Admire sights as you float down the iconic river on an all-inclusive tour with meals and accommodation, stopping to explore temples, , cities, and sights. Top of your tour with a visit to the Valley of the Kings before completing your trip in Luxor.

first you will visit ( The philae Temple )
Dedicated to the goddess Isis, the Temple of Philae is located in a beautiful setting, landscaped to match the original site of the temple when it was relocated by UNESCO after the building of the Aswan Dam threatened the site. The temple has several shrines and sanctuaries such as Trajan’s Kiosk or Pharaoh’s Bed. Visit the temple at night to attend the Sound and Light show.
then you will visit ( The High Dam )
Prepare yourself for a particularly overwhelming sightseeing experience: the Aswan High Dam is truly impressive. The Dam is 3600 metres long, 980 metres thick at base and 111 metres tall (at its highest point).

The waters of Lake Nasser, the world’s largest man-made lake, have amassed behind it. It provides irrigation water and electricity for the whole of Egypt. Located 13 km south of Aswan, the High Dam is usually included on south Aswan daytrips itineraries.

Then you will return to the boat to have lunch. At night , you will go on a free time in Aswan City.

After having lunch , you will go with the tourist guide to visit Kom Ombo Temple After visiting the temple ,you will go to spend your night in Edfu.

After having breakfast ,
you will visit Edfu Temple by carriage and the guide will explain the temple for you.
This Ptolemaic temple, built between 237 and 57 BC, is one of the best-preserved ancient monuments in Egypt. Preserved by desert sand, which filled the place after the pagan cult was banned, the temple is dedicated to Horus, the avenging son of Isis and Osiris. With its roof intact, it is also one of the most atmospheric of ancient buildings.

Then you will return to the ship to go on your voyage to Esna and seeing Esna lock.
Esna Lock has 2 entrances, the front entrance is 32 meters in length while the back entrance is 29.3 meters long. 40 meters in depth Diaphragm walls deep been used to construct the Lock and a bridge been constructed and rested over the walls.

Then you will go to Luxor in the evening to spend a night there on the boat.

After breakfast, you will have to check out and leave the boat. With a tour guide and in an air conditioned car you will go to visit the most beautiful temples in the world in the West Bank ( Hatshpsut temple – the Valley of the Kings – Memnon statue)

first ( Hatshpsut temple )Located beneath massive cliffs near the west bank of the Nile, the Mortuary Temple of Hatshepsut, also known as Deir el Bahri, is dedicated to Amon-Ra, the sun god. Designed by an architect named Senemut, the temple is unique because it was designed like classical architecture. Note the lengthy, colonnaded terrace some of which are 97 ft high, pylons, courts, and hypostyle hall. Inside you’ll see the sun court, chapel and sanctuary. Temple reliefs depict the tale of the divine birth of Hatshepsut and trade expeditions to the Land of Punt (a reference to modern Somalia or the Arabian Peninsula). Ticket Price(s): Regular: 30 EGP Student: 15 EGP
then ( the Valley of the Kings )

It was part of the ancient city of Thebes and was the burial site of almost all the kings (pharaohs) of the 18th, 19th, and 20th dynasties (1539–1075 BCE), from Thutmose I to Ramses X. Located in the hills behind Dayr al-Baḥrī, the 62 known tombs exhibit variety both in plan and in decoration. In 1979 UNESCO designated the valley part of the World Heritage site of ancient Thebes, which also includes Luxor, the Valley of the Queens, and Karnak.

then (Memnon statue )
The Colossi of Memnon (also known as el-Colossat or el-Salamat) are two monumental statues representing Amenhotep III (1386-1353 BCE) of the 18th Dynasty of Egypt. They are located west of the modern city of Luxor and face east looking toward the Nile River. The statues depict the seated king on a throne ornamented with imagery of his mother, his wife, the god Hapy, and other symbolic engravings. The figures rise 60 ft (18 meters) high and weigh 720 tons each; both carved from single blocks of sandstone.

, then you back to go the East Bank to visit ( El Karnak Temple – )
first :The temple of Karnak was known as Ipet-isu—or “most select of places”—by the ancient Egyptians. It is a city of temples built over 2,000 years and dedicated to the Theban triad of Amun, Mut, and Khonsu. This derelict place is still capable of overshadowing many wonders of the modern world and in its day must have been awe-inspiring.

pic08For the largely uneducated ancient Egyptian population, this could only have been the place of the gods. It is the largest religious building ever made, covering about 200 acres (1.5 km by 0.8 km), and was a place of pilgrimage for nearly 2,000 years. The area of the sacred enclosure of Amun alone is sixty-one acres and could hold ten average European cathedrals. The great temple at the heart of Karnak is so big that St Peter’s, Milan, and Notre Dame Cathedrals would fit within its walls.

The modern town of Luxor is the site of the famous city of Thebes (Waset, in ancient Egyptian), the City of a Hundred Gates. It was the capital of Egypt from the twelfth dynasty on (1991 BC) and reached its zenith during the New Kingdom.

It was from here that Thutmose III planned his campaigns, Akhenaten first contemplated the nature of god, and Rameses II set out his ambitious building program. Only Memphis could compare in size and splendor but today there is nothing left of Memphis: It was pillaged for its masonry to build new cities and little remains.

Although the mud-brick houses and palaces of Thebes have disappeared, its stone temples have survived. The most beautiful of these is the temple of Luxor. It is close to the Nile and laid out parallel to the riverbank.

The temple has been in almost continuous use as a place of worship right up to the present day. During the Christian era, the temple’s hypostyle hall was converted into a Christian church, and the remains of another Coptic church can be seen to the west. Then for thousands of years, the temple was buried beneath the streets and houses of Luxor. Eventually the mosque of Sufi Shaykh Yusuf Abu al-Hajjaj was built over it. This mosque was carefully preserved when the temple was uncovered and forms an integral part of the site today.

. Then , you will leave to Luxor station or airport.

Confirmation will be received at time of booking.
Not wheelchair accessible.
Child rate applies only when sharing with 2 paying adults.
This is a private tour/activity. Only your group will participate.
Face masks required for travelers in public areas.
Face masks required for guides in public areas.
Face masks provided for travelers.
Hand sanitizer available to travelers and staff.
Social distancing enforced throughout experience.
Regularly sanitized high-traffic areas.
Gear/equipment sanitized between use.
Transportation vehicles regularly sanitized.
Guides required to regularly wash hands.
Regular temperature checks for staff.
Temperature checks for travelers upon arrival.
Paid stay-at-home policy for staff with symptoms.
Contactless payments for gratuities and add-ons