Get accompanied by a licensed NYC tour guide, who will hop off at each stop to provide you with a comprehensive & more private sightseeing experience

Ride in climate-controlled, luxury tour buses that offer comfortable and pleasant touring experience, as well as protection from weather elements

We're committed to providing a more enjoyable sightseeing experience. Our Discover NY Tour is a recipient of numerous industry-recognized awards!

Take a boat ride for breathtaking views of the NYC skyline from the water! (Seasonal: included in the tour itinerary from April 1 - Dec 31)

Get accompanied by a licensed NYC tour guide, who will hop off at each stop to provide you with a comprehensive & more private sightseeing experience

Ride in climate-controlled, luxury tour buses that offer comfortable and pleasant touring experience, as well as protection from weather elements

We're committed to providing a more enjoyable sightseeing experience. Our Discover NY Tour is a recipient of numerous industry-recognized awards!

Take a boat ride for breathtaking views of the NYC skyline from the water! (Seasonal: included in the tour itinerary from April 1 - Dec 31) 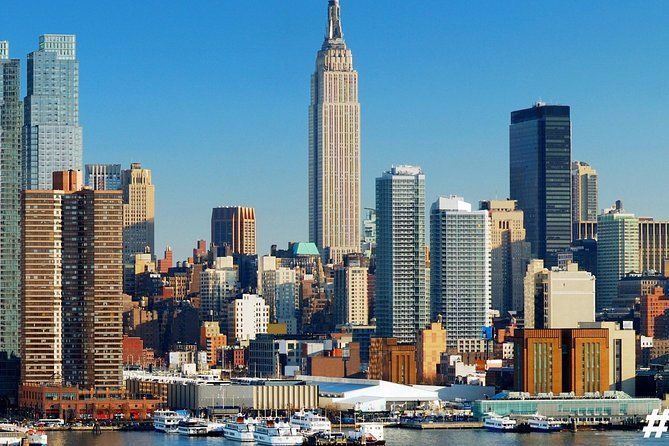 Starts Daily at 9 am and 10 am
Duration: 6 Hours
Departs/Ends on 7th Avenue (50th/51st)
Open-Top or Glass-Top Convertible Bus

After a drive through the Times Square area, the first stop is at Central Park West and 72nd Street, at the Dakota Building (former home of John Lennon). The stop includes a short guided walk into Central Park to visit the Strawberry Fields with the Imagine mosaic dedicated to John Lennon, as well as the views of other sites in the area such as the luxury condominiums that numerous celebrities call home. We'll also drive by Central Park Zoo, famous Plaza Hotel and Carnegie Hall.

Part of a guided tour of Strawberry Fields

Part of the guided tour of Strawberry Fields

The second stop on the tour is Rockefeller Center, for views of St. Patrick's Cathedral, the location of the ice skating rink and Christmas Tree, and NBC's Today Show set.

Walk-by as part of the Rockefeller Center stop

The tour continues with a drive through some of the iconic NYC's neighborhoods, such as Greenwich Village, Soho, Chinatown, and the Financial District.

Seen from Madison Square Park (outside only)

Seen from Madison Square Park (outside only)

The fourth stop is the World Trade Center, as we visit the 9/11 Memorial. The tour does not include entry into the 9/11 Museum, but visitors can walk the grounds of the Memorial, visit the waterfalls of "Reflecting Absence," (the footprints of where the original twin towers stood), and see the Survivor Tree that stood through the destruction of 9/11.

45-minute lunch stop at 55 Fulton Market, located at 55 Fulton Street in Downtown Manhattan (not included in the tour price)

The fifth stop is a boat ride on the Staten Island Ferry to experience magnificent views of the Manhattan and Brooklyn skyline! Please note that in the off-season, between Jan 1 - March 31, in lieu of boat cruise, guests will (weather permitting) visit Pier 17 for a photo opp of the Brooklyn Bridge and Robert F Wagner Park in Battery Park for views of the Statue of Liberty from Manhattan.

Seen from the boat cruise

Seen from the boat cruise

Seen from the Staten Island Ferry

Confirmation will be received at time of booking.
Not wheelchair accessible.
Boat cruise is not included during the off season Jan 1 - Apr 1.
Stroller accessible.
Service animals allowed.
Near public transportation.
Infants must sit on laps.
In lieu of boat cruise, guests will (weather permitting) visit Pier 17 (for a photo opp of the Brooklyn Bridge) & Robert F Wagner Park in Battery Park (for views of the Statue of Liberty from Manhattan).
Most travelers can participate.
This experience requires good weather. If it’s canceled due to poor weather, you’ll be offered a different date or a full refund.
This tour/activity will have a maximum of 30 travelers.
Face masks required for travelers in public areas.
Face masks required for guides in public areas.
Hand sanitizer available to travelers and staff.
Social distancing enforced throughout experience.
Regularly sanitized high-traffic areas.
Gear/equipment sanitized between use.
Transportation vehicles regularly sanitized.
Guides required to regularly wash hands.
Regular temperature checks for staff.
Temperature checks for travelers upon arrival.
Contactless payments for gratuities and add-ons

9/11, central park, strawberry fields, all the info our tour guide gave us, and boat ride seeing the statue of liberty. It indeed was a full, packed day!

Our tour guide Rachel was awesome! Very informative about NYC and really kept the tour moving. Very organized. Would recommend anyone to do this tour with her. My family and I had a great experience!

Great tour, perfect day, and New York memories for a lifetime. That’s all folks until we meet again.

Fantastic tour of New York. Tyler, our guide was amazing. Great historian and just lit up the bus. The whole bus was like a family with the way she had us interacting with each other. Defiantly recommend.

What a wonderful experience we had and our guide Tyler was such a pleasure and she was so knowledgeable. She definitely made our day in New York an experience to remember.

Rachel was very knowledgeable about the history of New York, learned a lot. She took very good care of us. I recommend anyone taking this tour to ask for her.

Tim was our guide and Manny was our driver. Tim was a great guide and personable; he had some great insights while on the tour. Glad I booked this tour for my husband and I. It was fun to be part of Tim’s “ my people” Got to see all the sights indicated in the tour details. Definitely a must do tour in NY.

The entire day was memorable. A great way to see so much of New York in a day and to get some behind the scene insights to people, places and times. Tim is a perfect tour guide. He was able to help you relive aspects of the terrible tragedy on 9/11 at the memorial. Highly recommend.

Tour guide was awesome. Fun trip. It’s worth booking. I recommend doing at the start of your trip here as it will guide you on places to go during your stay.

Excellent tour! Our guide, Taylor, very knowledgeable answered all our question. She explained the history of NYC, positioned us in great spot to take pictures. Will recommend this tour. I learned alot.

The tour guide was very very knowledgeable and made the experience very entertaining! The tour itself gave us a great overview of the city; a good sampling of New York. We would recommend this to anyone!

See New York City in a day tour!
We absolutely loved how comprehensive this tour was! We couldn’t believe how many things we saw in the city! Our tour guide Mike was great and shared his love and pride of the city with us. It was great having a guide who had lived his life there and could share so many stories and facts with us! We could not have asked for anything more!

Our Guide Brandon was awesome, patient, kind, super informative and was very aware of all of us at all times! Totally recommend this tour - learned a lot and saw a lot!!

This was a great tour. I'd recommend that you take it early into your trip, if possible, so you have time to go back and visit the sites. Our guide was Tyler and she was fantastic! She is a wealth of information and kept everyone very engaged in what we were seeing. She stayed with us when we got off the bus, which was great. Our bus driver was super as well.

Mike, our tour guide is very knowledgeable about the history of the city. Saw lots of places in NY….

Brandon , was awesome he gave us so many great facts about nyc , we felt like we seen alot of nyc in 6 hrs . I loved it. He takes great pictures also very personal experience

One of the best tours we have been on! I love every minute of it! I would definitely book this tour again.

Amazing tour guy !! He was very prepared and show us New York in a way we will remember! We definitely coming back !

Ferry to liberty statue, central park and everything else. It was a good experience over all. The guide was very knowledgeable

The tour guide was absolutely amazing!!! He was informative, helpful, story telling, and knowledgeable. The driver was friendly and offered water to everyone getting on and off the bus at each stop. Definitely worth the money the only thing I would suggest differently is Do Not waste your time going to the grocer!!!!! Go to dunkin and get a coffee and breakfast you’ll be glad you did!!!! I’m just sayin!!!!

Rachel is thorough and so informative! Made us into New Yorkers! I have been to nyc a few times but all of her info was new. Enjoyed the historical info as well as the celebrity info sprinkled in. This is a “hit the highlights” tour. Rachel keeps things moving! She’s a blend of no-nonsense and humor. A great value!

My husband took me to NY for my Bday and booked one day guided tour and it was amazing! Our tour guide Rachel was so sweet and funny. Loved the knowledge she gave us about NY. So we became New Yorkers for day:) thanks to her. Highly recommend her and the tour.

Rachel was an excellent tour guide. She is very knowledgeable and I enjoyed her energy. She truly cared for everyone in her group and ensured that we were well taken care of. I would highly recommend this tour.

Wonderful experience. We saw and learned so much about NY city I n one day! Our tour guide Rachel was excellent and she made the tour fun. The bus start and stop locations were within walking distance to our hotel and that made it so much easier for us. A lot of pictures moments along the way and Rachel helped all of us get sone great photos. Highly recommend.

Mike was an excellent tour guide who gave great information and kept us entertained. They did get off to a late start as they waited for a large group who ended up filling up the entire bus which I didn’t feel comfortable with given the surging COVID cases. And, despite the bus having signs that people were required to show proof of vaccination that was not done. Also fairly lax masking enforcement on the bus. I would repeat…just not during a pandemic if this is how packed they’re going to do it.

How wonderful to hear and educated by knowledgeable tour guide. Pleasant driving and engaging experience
Thank you

Gil and Eric were a great team, very informative and a pleasant adventure. He gave us very specific dates and names to compliment the tour and city.