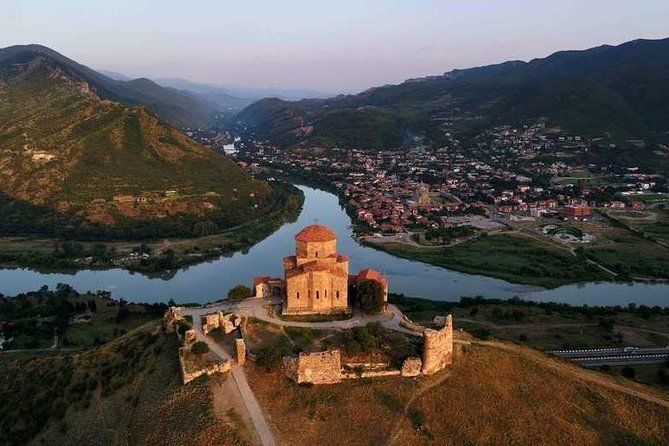 Our walk begins A. Pushkin, M. Lermontov, P. Tchaikovsky, A. Dumas-father, L. Tolstoy and many others. Turning off the path, you will pass through the places where the events described by Lermontov in the famous poem “Mtsyri” developed, and go up to the Jvari temple of the VI century - from here you will see an enchanting view of Mtskheta: “... where the merging noise, hugging, as if two sisters , the jets of Aragva and the Kura ... "

Stop At: Mtskheta Church of the Holy Cross, Mtskheta Georgia

Temples of Mtskheta
You will visit Svetitskhoveli Cathedral (Pillar of Life-Giving) - the patriarchal cathedral of the Georgian Orthodox Church. Get acquainted with its history and significant events of the past. Here is the burial place of the shrines of Christianity - the tunic of Jesus Christ and the mantle of Elijah the Prophet, as well as the relics of St. Andrew the First-Called.

Then stroll to the Samtavro temple, where the grave of the first Georgian Christian king Mirian and his wife, Queen Nana, is located, as well as the relics of the holy elder Gabriel Samtavrii. You will also see a blackberry bush, under which she lived and preached. Nina. The “Blackberry”, repeatedly cut down by barbarians and arising again and again, is considered miraculous.

Pagan past in the caves of Uplistsikhe

A short road to the northwest - and you will find yourself in a cave city of the end of II - the beginning of the first millennium BC. e. I studied a lot of notes about this unusual place, and I will tell you all the most interesting. Exploring the stone labyrinths of living and utility rooms, you will imagine the life of the pagans and their cult rites. You will learn about the trade of Uplistsikhe with the ancient states of Urartu and Media, about its heyday and decline. It also offers wonderful panoramas of the Kura Valley.

In the second part of the trip, at the request of the group, you can visit the Stalin Museum in his hometown of Gori. In the halls of the entire museum pantheon, you will see the preserved sculpture of Stalin, his personal belongings and furniture - the museum guide will conduct an excursion.

Confirmation will be received at time of booking.
Not wheelchair accessible.
Infant seats available.
Most travelers can participate.
This tour/activity will have a maximum of 19 travelers.
Face masks required for travelers in public areas.
Face masks required for guides in public areas.
Social distancing enforced throughout experience.
Transportation vehicles regularly sanitized.
Guides required to regularly wash hands.
Regular temperature checks for staff.
Temperature checks for travelers upon arrival.
It is necessary for the burner to have a primer and a disinfectant solution.