Memphis City Sightseeing Tour
See top Memphis attractions on this narrated sightseeing tour that takes you along the Mississippi River. Pass Victorian homes, historical statues and cultural landmarks like the Pyramid Arena and the Lorraine Hotel, where Martin Luther King Jr was assassinated.

After your combo tour you’ll be taken back to your hotel.

Memphis City Sightseeing Tour
See top Memphis attractions on this narrated sightseeing tour that takes you along the Mississippi River. Pass Victorian homes, historical statues and cultural landmarks like the Pyramid Arena and the Lorraine Hotel, where Martin Luther King Jr was assassinated.

After your combo tour you’ll be taken back to your hotel. 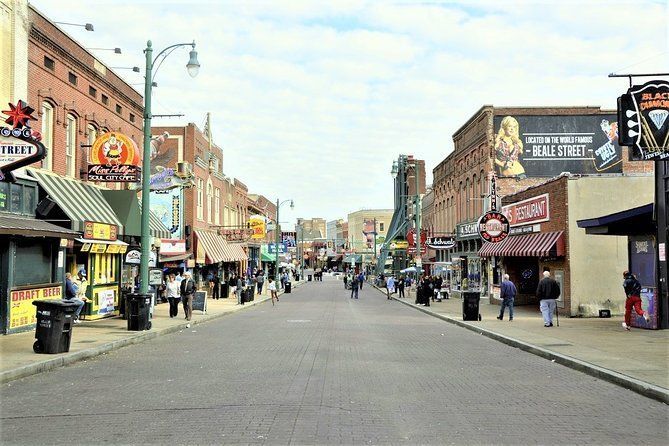 Starting from your downtown Memphis hotel, your friendly, fun, professional guide will take you on narrated sightseeing tour by mini-coach.

You’ll also stop at the Peabody Hotel, famous for the 'Peabody Ducks' that live on the hotel’s rooftop and make their way to the lobby in a daily 'March of Ducks' celebration.

Cruise down Beale Street and Cotton Row, and travel along the Mississippi River and through Victorian Village, where you’ll see homes built in the 1800s.

Cruise aboard the Memphis Riverboats

Cruise along the Mississippi River with an upgrade including the Memphis Riverboats.

The studio where Elvis Presley recorded his first song.

Confirmation will be received at time of booking.
Wheelchair accessible.
Stroller accessible.
Near public transportation.
Most travelers can participate.
This experience requires good weather. If it’s canceled due to poor weather, you’ll be offered a different date or a full refund.
This experience requires a minimum number of travelers. If it’s canceled because the minimum isn’t met, you’ll be offered a different date/experience or a full refund.
This tour/activity will have a maximum of 42 travelers

how I feel about my child

Michelle, our Tour Guide, was phenomenal. It was refreshing to be the student. I am a teacher. My grand prince, Aidan and I came to Memphis to enjoy our Fall Break. We attended the Memphis Grizzlies game on Monday. Our tour was the “icing” on the cake. Michelle presented the city, while highlighting its attributes. I will definitely recommend to everyone that will listen how fulfilling this experience was.

One of the best city type tours we have been on. It was all made possible by our fantastic tour guide Sam. He was very informative, engaging and personable. We would highly recommend this tour and be sure to request Sam as your guide.

The tour books we read did not include the Victorian homes so having that be part of the tour was a pleasant surprise.

Driver Sam was the best - he was informative, knowledgeable and really took care of his group. Riverboat was a nice, relaxing time. The only item of concern is the amount of walking to the riverboat but it was fine. Everyone was SO friendly.

So they picked me up a half mile and dropped me off .7 miles from the hotel and told me they would return in 2.5 hrs. I was finished with the Civil Rights museum in a hr. So I just spent the rest of the day walking to the other places I wanted to see. Spent $35 for a ride that was so close to my hotel. In the past, all my hop on n off circled every 30 minutes, not every 2.5 hrs

The tour was great. Lots of history. We also did the Sun Studio tour and that was well worth it. After reading reviews for the Riverboat tour we decided to opt out of that one. Michelle was our guide and she was fantastic!

We had Michelle as our guide and she was great! We were able to meet up with the tour at the Visitor Center and from there went on the bus tour of Memphis that included a ton of great information. Michelle speaks VERY fast and packs a lot of information in in a short amount of time - it didn't bother me at all and I could understand her but others on our tour complained about it. She was asked to slow down and did for about 30 seconds before resuming her faster pace again. The city tour was interesting and included brief stops at the I Am A Man monument, the Peabody (not for the duck walk because of Covid) to see the lobby and gift shops, and at Beale Street (enough time to grab a drink or lunch).

The Sun Records studio tour was the highlight for us, definitely pay the extra to take this tour!! I got chills on this tour being in the same space as so many amazing musicians and artists over the years and still to this day. You are walking the footsteps they all did and even get to hold and experience the actual microphone used by all of those amazing musical geniuses! This tour was a must for anyone who loves music!

Lastly we did the Riverboat cruise tour. The timing from when we arrived to when the Riverboat left the dock was such that we had to sit on the boat and wait for about 45 minutes before leaving. The first level of the boat has a bar and some concessions food available but had a strong diesel/fuel smell that was making me a little queasy. The second and third levels had seating and was outdoors but the trash cans coupled with a dead fish odor coming off the river was pretty unbearable too because of the heat. The smells all went away as soon as the boat got underway but it was a 45 minute wait until that did happen. Our guide was Brandon, he was funny and entertaining. The Riverboat cruise goes up and down the river while giving info about Memphis and the history of riverboats and the river itself. We had already heard most of the info from Michelle on the bus tour, so we didn't really learn anything new. Because of all the time sitting and waiting to leave we got back at a time that didn't allow us to get to the other 2 museums that we hoped to go to afterwards. In hindsight we would have skipped the Riverboat tour and gotten to do other things we wanted to do.

Our driver, Sam King, was great! Very accommodating and shared lots of history and info. Look forward to returning to see more sights!

The Graceland and Tupelo Elvis birthplace is the best we loved it. I’m an avid fan of Elvis and I am not disappointed in this tour I’ll recommend it to my family and friends

Lots of fun, staff friendly and good service. Tour Guide very knowledgeable and accommodating. Love the city tour learned a lot from guide and the boat tour provided a lot of history and facts about Memphis,

The sun studio tour was well worth the add cost the river cruise was relaxing and informative. Michelle was very informative and funny. At times hard to understand and rushed . Over all combination tour was well with the price. JUst do it!

All of the tour was memorable.
Pick up was on time
And Phyllis was awesome.
Michele was great and very informative
We really enjoyed the entire tour.

The Sun Studio tour was exceptional. The city tour was very informative and a good way to get a feel for Memphis early in the visit. The riverboat cruise was nothing special. I suppose it allows one to cross “cruise the Mississippi” off of a bucket list.

Overall just a great package! Very informative and interesting. Ends with a nice riverboat cruise. Loved everything about this one!

Our guide, Michelle, was very well-informed and gave a great tour! She has personality plus which made for a really fun time!

It was a great tour. Full of lot of history of Memphis. Stops were great and enough time to enjoy without being rushed. Our guide Michelle was knowledgeable and a true pleasure to be on her tour. Friendly,fun,and professional

Our bus tour guide, Michelle, was the perfect balance of knowledge and humor. She was very gracious when we had to exit the bus when my daughter became ill. The people in the office were also immediately responsive to get us connected to the river boat tour later that day. Nice riverboat tour/guide as well.

Had a great time. Michelle was a great tour guide. Saw the sights of Memphis from our air conditioned bus.

Michelle was a wonderful guide. Very knowledgeable about the city and added personal stories, which made it more personal. She answered questions and kept us on schedule
Thanks for a great tour

The tour guide was wonderful and pick up and drop off was perfect ...A+++... The transportation was clean and air condition..

Sam was the best! The tour was informative and fun. Sam knew great stories and behind the scenes info Highly recommend!!!

KAREN did a great job of introducing us to Memphis. Full of information and Fun!
WEAR YOUR MASKS on the bus!

Learned a lot about Memphis History that I didn't know. Sam was a great tour guide. He is very knowledgeable and a great people person.

The Bus tour was great , both tour guides were great but you couldn’t enjoy the boat ride because it was extremely hot on the boat

The city tour was amazing. Michelle was very informative about the different sites and knowledgeable about the city’s history.

Michelle's narration was awesome 👌🏾 I came away knowing a lot more about the city and it's history.

Sam was our tour guide. That man is amazing!! He's funny, friendly, and definitely knows his stuff. He made the tour exciting and every bit of worth while. We'll return and request him.

Sam, our tour guide, was great. He was very informative and helpful. It was so nice to be picked up at our hotel and not have to worry about getting somewhere. We had a great day and I would highly recommend these excursions. My only complaint would be that we were late to the Peabody and so we missed the movement of the ducks.