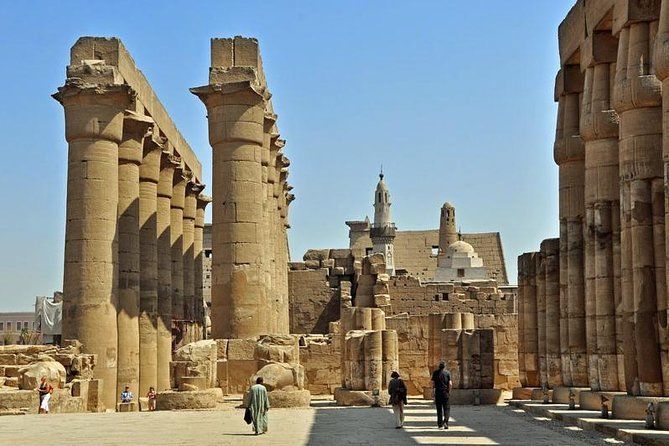 This tour will take you to one of the most amazing ancient sites in Egypt, Luxor. You will visit the Karnak Temple, Luxor Temple, Valley of The Kings, Hatshepsut Temple and Colossi of Memnon.

This tour will take you to one of the most amazing ancient sites in Egypt, Luxor. You will visit the Karnak Temple, Luxor Temple, Valley of The Kings, Hatshepsut Temple and Colossi of Memnon.

Our Luxor trip will start with pick up service from your hotel by air-conditioned van to drive from El Gouna to Luxor for three hours across the Eastern Desert of Egypt. In your arrival at Luxor you will be accompanied by your Egyptologist guide to visit the famous Karnak Temples, An amazing feat of ancient Egyptian engineering, Karnak complex comprises three temples and took several generations to complete. The centerpiece is undoubtedly the Temple of Amun-Ra, the largest surviving column-supported temple in the World although the hypostyle hall containing 134 free standing columns is also world renowned and the backdrop for several Hollywood films. Thebes is often referred to as the greatest and the biggest outdoor museum in the world. Cross the River Nile to the West Bank and drive through lush farmland and sugar cane plantations to edge of the desert where you will find the tombs of the pharaohs in the Valley of the Kings. Cut directly into the mountains, the tombs in Valley of Kings were filled with treasures beyond comprehension and covered in beautiful painted hieroglyphics depicting the life of the king they housed such as tomb of King Tutmosis I, tomb of Tutmosis III, tom ok king Tutankhamon, King Ramses VI, King Mrenptah and Amonhotep II. Continue your Luxor trip to the impressive mortuary Temple of Queen Hatshepsut. Architecturally stunning, Hatshepsut temple would not look out of place with modern buildings and contains beautiful murals on its inner walls. On your return to the East Bank, there is a photo opportunity at the Colossi of Memnon, two gigantic statues that stand proudly, yet virtually alone at the entrance to what was Amenhotep III’s mortuary temple. After lunch is served during your Luxor trip in a local restaurant. Free time for shopping, then you will be transferred back to Hurghada drop off service at your hotel in El Gouna

Confirmation will be received at time of booking.
Wheelchair accessible.
The duration of transfers are approximate, the exact duration will depend on the time of day and traffic conditions.
May be operated by a multi-lingual guide.
This is a private tour/activity. Only your group will participate