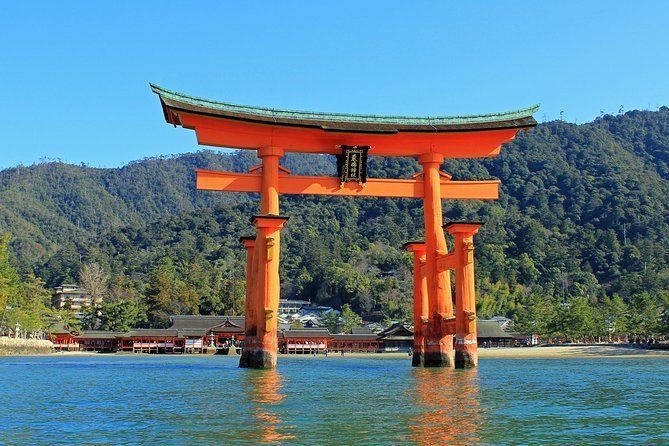 Discover the Peace Memorial City Hiroshima and visit the magnificent landmarks in a day!  Travel on an air-conditioned coach in Hiroshima and get the chance to visit The Peace Memorial Park, The Atomic Bomb Dome and Miyajima Itsukushima Shrine. This tour is operated with English speaking tour guide and Multilingual Audio Guide in the bus.

Discover the Peace Memorial City Hiroshima and visit the magnificent landmarks in a day!  Travel on an air-conditioned coach in Hiroshima and get the chance to visit The Peace Memorial Park, The Atomic Bomb Dome and Miyajima Itsukushima Shrine. This tour is operated with English speaking tour guide and Multilingual Audio Guide in the bus.

You can only see the main building without small houses which is for defending from enemies, because the world was already became peaceful at this era.

This is symbol of peace in Hiroshima prefecture.

This construction designed by Jan Letzel from Czech republic in 1915. It was destroyed by Atomic bomb in 1945, and was listed world heritage in 1996.

This is Peace memorial park in Hiroshima prefecture.

There are more than 35 monuments. We will introduce the most impressive monuments.

It was opened to the public since 1954,there are over 50 pieces peaceful monuments.

Also we have free time in the Peace Memorial Museum.

Every August we held on the peace memorial ceremony praying for forever peace in this whole world.

There are 2 options with lunch or without lunch

And also, you can offer vegetarian option

We will take a return ferry on this tour for going to Miyajima island.

This shrine was built in 593 by emperor, but most of construction was rebuilt in 1168 by Kiyomori Taira.

This shrine was built on the sea. Because,ancient people believed Miyajima island was goddess.

The signature of Itsukushima shrine is Otorii gate which stands itself.

The high is same size of the great Buddha in Nara prefecture.

The pillar's diameter is 10m. You can walk there by your foot when law tide.

At the Miyajima island, not only Itsukushima Shrine but also Daishoin is photogenic.

There are many Jizo guardian statues in rainbow color costumes.

Also relaxing Budda statue and many lanterns you can discovered.

Confirmation will be received at time of booking.
Not wheelchair accessible.
Infant rates apply provided they do not occupy a seat and meal..
Stroller accessible.
Near public transportation.
Infants must sit on laps.
Please advise any specific dietary requirements at time of booking (if lunch option is selected). Please let us know 2-days before the tour if these options are necessary.
Audio guidance in English, Spanish, French, Italian, Russian, Chinese, Thai and Indonesian.
Free Wi-Fi service available on the bus.
Travelers should have a moderate physical fitness level.
This tour/activity will have a maximum of 45 travelers

Wonderful tour highlighting the best of one of Japan's most beautiful cities. A must see for those interested in world history.

If you only have 1 day in Hiroshima this tour is the one. We were blessed to have Yurika Fumino as our tour guide which was a spiritual, historical, and culinary gift to us, plus she has such a terrific sense of humor.
The Peace Memorial and Museum is such an emotional event, and she explained the sites in loving and careful detail.
The trip to Miyajima Island was a wonderfully spiritual trip, except for the part where a fawn attacked Yurika which was hysterically funny.

Our guide Jun was very friendly and relaxed, got along with everyone and made us feel like we were being taken out by a local mate. The dome/peace park was emotional time and so worth doing. Jun shared stories and context of the tragedy and made paper cranes for us which was really nice. He also took us for an amazing local lunch okonomiyaki, so tasty! The Miyajima part was awesome too, overall an amazing day.

Rio excellent guide. Took this tour using our jr pass from kyoto to hiroshima. Took the Shinkansen train arrival Hiroshima at 1000 hrs and tours starts at 1000 hrs. Rio waits just at the exit, he cannot be missed with the flag. Tour finished at 17:30 hrs and took the return train at 17:42. It can be timed to perfection.

Miyajima island is good place pick up some souvenirs.

Our guide was very willing to answer questions. He was thoughtful and gave good explanations. It was worthwhile having a tour at these two sites.