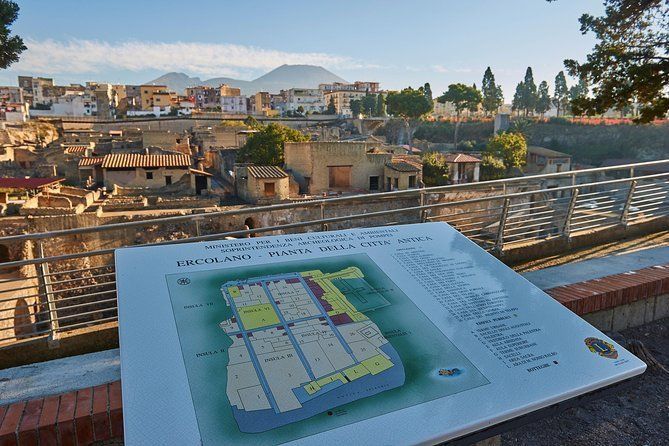 Herculaneum was a residential coastal town superbly preserved due to the fact that it was covered in volcanic mud during the eruption of Vesuvius in 79 AD. The buildings have been so well preserved that you can walk down the streets pretty much exactly as the Romans would have done over 2000 years ago! Mount Vesuvius is one of the most famous volcanoes on earth. It is also the only active volcano on the mainland of Europe and provides the focal point of the entire Bay of Naples.

Herculaneum was a residential coastal town superbly preserved due to the fact that it was covered in volcanic mud during the eruption of Vesuvius in 79 AD. The buildings have been so well preserved that you can walk down the streets pretty much exactly as the Romans would have done over 2000 years ago! Mount Vesuvius is one of the most famous volcanoes on earth. It is also the only active volcano on the mainland of Europe and provides the focal point of the entire Bay of Naples.

Mount Vesuvius is one of the two active volcanoes of continental Europe and one of the most studied and dangerous in the world due to the high population of the surrounding areas and its explosive characteristics.

The archaeological excavations of Herculaneum have returned the remains of the ancient city of Herculaneum, buried under a blanket of ashes, lapilli and mud during the eruption of Vesuvius in 79, together with Pompeii, Stabiae and Oplonti.

Found randomly following the excavations for the construction of a well in 1709, the archaeological investigations in Herculaneum began in 1738

Confirmation will be received at time of booking.
Not wheelchair accessible.
Comfortable shoes are recommended.
Near public transportation.
Most travelers can participate.
This tour/activity will have a maximum of 45 travelers

It was interesting to see Herculaneum, shame they cannot uncover more of the lost city. Would have liked an extra hour to see in more detail. Tour guide showed most important parts and told us all history through head sets. Food/drink at lunch time was extra but very good value and tasty. The trip to Mt Vesuvius was good. Coach took us up mountain so far then if we wanted to go to the top it was a 25 min steep gravel walk (Definitely needed good walking shoes which was advised) Views at top were good, but was slightly disappointed - expected the crater to be deeper. There was a guide at top giving information about Mt Vesuvius. Drinks(they were cheap)/souvenirs at top too which was a nice surprise.

The trip itself was good. We had a somewhat difficult time understanding the tour guide on the bus and in Herculaneum. A very strong accent combined with a poor sound system made it challenging. He did have good knowledge of the Herculaneum site. It was also nice that the lunch restaurant allowed picnic lunch area. It would have been nice to have more time at Mount Vesuvius. It was pretty rushed to hike up, spend time with the local guide, walk around the site and get back down. The biggest problem was that we almost missed the tour completely because the meeting time and location were wrong on the actual Viator voucher. We strongly recommend confirming with the local tour provider. The local company (Acampora Travel) saved the day with exceptional customer service that helped us join the group in progress.

Had a wonderful day with our guide Emanuela. She was informative yet fun. The hike to the top of Mt Vesuvius is quick but was able to get great pics once up there. Need to move quickly down to catch the bus. There only a couple of porta potties at the bottom that are a Euro each so plan accordingly. Herculaneum tour was very informative - combination of history and humor. The light lunch not included between the 2 places was worth the stop. Wear good shoes for the hike up Mt. Vesuvius and the usual sunscreen and hat recommended. Thoroughly enjoyed our day and would highly recommend!

This was a great tour. Our tour guide, Roberta, was excellent and had some great stories. Ercolano was worth seeing even if you have seen Pompeii and is much more compact. Vesuvius was an experience - no guided tour really, given that everyone walks at their own pace. It is a climb and unfortunately the weather was not that great so visibility could have been better, but still worth it. Only change would be a little better organization at pick up point and the bus was really hot!

our tour guide was very good and we really enjoyed both trips.

Informative and friendly guide for the day long tour, Well paced, plently of time to get up Vesuvius, and explore Herculaneum, definitely recommend the pizza from the restaurant during the lunch stop !

Enjoyed trip , I did not pay extra to go to top of Versuvius as don't like heights but my friend said it would be better to use guide at top but didn't have time to do.
Herculaneum was excellent not as big as Pompeii but very well preserved definitely worth visiting .
Guide was very helpful and informative .

It was great, very good guide, she was wonderful, we would do it again.
Stopping with the group for lunch was also a nice touch, this is where you can meet your fellow travlers.

Mt Vesuvius and Pompeii Tour by Bus from Sorrento

Pompeii and Mt Vesuvius from Sorrento