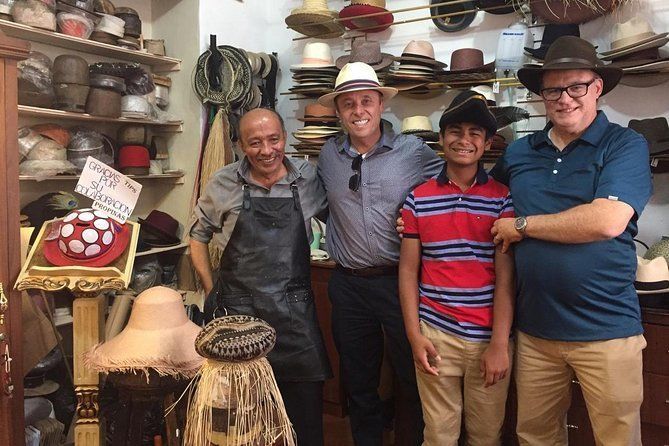 Join this 3 -hour tour in the Old District of Quito which have been recognized by UNESCO as a World Heritage because of its historical buildings, churches, museums, and Plazas. Walkthrough narrow city streets as you make the best pictures to numerous city attractions and landmarks. Join us and enjoy to get to know about history, culture, and gastronomy of Quito and Ecuador.

Join this 3 -hour tour in the Old District of Quito which have been recognized by UNESCO as a World Heritage because of its historical buildings, churches, museums, and Plazas. Walkthrough narrow city streets as you make the best pictures to numerous city attractions and landmarks. Join us and enjoy to get to know about history, culture, and gastronomy of Quito and Ecuador.

It is a Jesuit church in Quito, Ecuador. It is among the best-known churches in Quito because of its large central nave, which is profusely decorated with gold leaf, gilded plaster and wood carvings.

The Church and Convent of San Francisco forms part of the City of Quito World Heritage Site, the first site ever inscribed on the World Heritage List in 1978. It is the oldest and most significant religious site in Ecuador.

It is the principal and central public square of Quito, Ecuador. This is the central square of the city and one of the symbols of the executive power of the nation. Its main feature is the monument to the independence heroes of August 10, 1809, date remembered as the First Cry of Independence of the Royal Audience of Quito from spanish monarchy.

Santo Domingo church and monastery represent one of the most important religious structures in Quito. Its history is characterized by fortune. It began in 1880 with the arrival of a group of Italian priests who began a modernization process that included aesthetic changes in the temple.

Basilica del Voto Nacional is one of the most important examples of neo Gothic arquitecture in Ecuador. The Basilica de Quito was blessed by Pope John Paul II on January 30, 1985, was officially opened on July 12, 1988.

This is a narrow cobblestone street very famous among locals because it appears in many paintings and it was the craddle of several famous poems and songs. The street has recuperated its splendor and its is very popular for local people who come on fridays and saturday nights for drinking a traditional hot "canelazo" made of cinnamon with a liquor!

The Panecillo hill, where we find a huge figure of the Virgin of Legarda, emblem of Quito. Have a magnificent view of the city.

Confirmation will be received at time of booking.
Travelers should have a moderate physical fitness level.
Child rate applies only when sharing with 2 paying adults.
A minimum of 2 people per booking is required.
Operates in all weather conditions, please dress appropriately.
This experience requires a minimum number of travelers. If it’s canceled because the minimum isn’t met, you’ll be offered a different date/experience or a full refund.
This tour/activity will have a maximum of 2 travelers.
Face masks required for travelers in public areas.
Face masks required for guides in public areas.
Hand sanitizer available to travelers and staff.
Social distancing enforced throughout experience.
Transportation vehicles regularly sanitized.
Guides required to regularly wash hands.
Regular temperature checks for staff

Excellent Tour - Recommended the best to see in Quito in a half day. Informative and a nice friendly guide. Made us feel welcome and relaxed. Recommended a good restaurant.

The tour exceeded my expectations. Our guide was knowledgeable and made the visit to Quito memorable. I highly recommend this tour.

This was our first visit to South America. We stopped in Quito on our way to the Galapagos Islands. We had a lovely tour with Anna Marie! She was thorough, answered all of our questions and gave us excellent recommendations for dining.

Great tour by Ivan. We had a good taste of what Quito is all about. Nice relaxing pace. Very imformative.

Although of course short at half a day, this was an excellent tour. Our guide, Gabriel, was both enthusiastic and very knowledgeable. He made it a very enjoyable and worthwhile time.

A great tour with a very friendly tour guide.

Fabian was extremely knowledgable about all of the sites and history of Quito and Ecuador. He provided numerous insights that would not be possible using a guide book and the informational signs at the sites. Very good tour!

Our guide Jose was great! He was very knowledgeable, spoke fluent English and took us to many attractions in the Old Town. He also took us to two viewing overlooks that are not part of or accessible by commercial tours. His wealth of information and enthusiasm made the tour really enjoyable and informative. I would definitely recommend this tour.

This tour was fantastic! Our guide was warm, knowledgeable and personable. I learned so much about Equador, it's culture, economy, history without feeling overwhelmed. I highly recommend this tour!

This tour was a great way to view Quito and to learn some of the history of Quito and Ecuador. Tour guide Francisco was very knowledgeable and friendly. We drove up to Panecillo Hill for spectacular views of the city and great photo opportunities. We then drove to the Old Town for a walking tour including La Ronda Street, La Compañía church, San Francisco church, Independence Plaza, etc. We even got to see a religious procession through the streets. Very interesting and enjoyable tour, and worthwhile to learn some of the history, which we probably would not have learned on our own without the guide.

I think our guides name was Fabio and he was fabulous. His knowledge of history was phenomenal.
We really enjoyed our tour with him. A very nice person as well.

What a fabulous way to see all the sites of Quito. We opted for the private tour and would highly recommend it. Our guide was knowledgeable, friendly and took us on an in depth tour of Quito. If you only have time for one tour this would be it.

Excellent guide who knew a lot about the city and made us feel that he cared about what he was doing for us and trying to make it special . Took us to a nice restaurant and explained the menu which has helped us when we have been to other restaurants later. A great day!