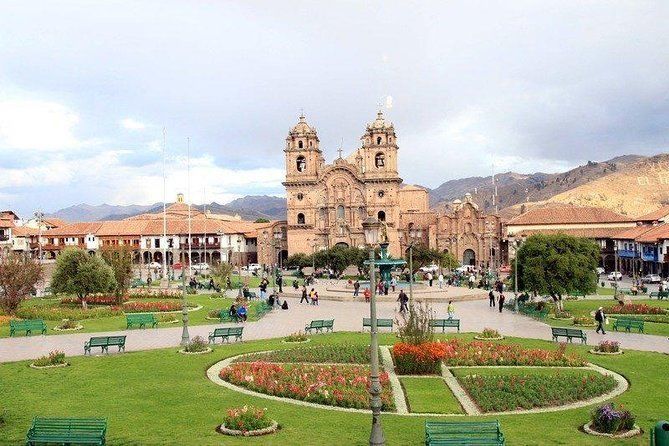 Discover the magic of Cusco on a 4-hour sightseeing tour of the capital of the Inca Empire. Explore the city’s main attractions, such as the Convent of Santo Domingo and continue to nearby archaeological sites including Sacsayhuaman.

Discover the magic of Cusco on a 4-hour sightseeing tour of the capital of the Inca Empire. Explore the city’s main attractions, such as the Convent of Santo Domingo and continue to nearby archaeological sites including Sacsayhuaman.

The Sacsayhuaman (also Saksaywaman or Saqsawaman, meaning ‘Royal Eagle’) fortress-temple complex lies at the northern edge of the former Inca capital Cuzco. Constructed during the reign of Pachacuti (1438-1471 CE) and his successors, its massive, well-built walls remain today as a testimony not only to Inca power but also the skills of Inca architects and their approach of blending their monumental structures harmoniously into the natural landscape.

The Convent of Santo Domingo in Cusco was built on the foundation of the Templo del Sol and Qorikancha. The Catholic temple has been erected on the same Inca temple, as though demonstrating the destruction and annulment of the ancient cult; today it becomes the apse of the Dominican temple.

This site is located at 8km from the city of Cusco , at 3700 meters above the sea level, is also known as the Cavern Tambo( storage).

His name comes from the Quechua words Tampu, which means place or storage, and Machay, which means rest, is a splendid place where took place a ceremony for the water, and thank for his precious gifts like make the flowers grow, and giving life to all creatures in the universe.

Tambomachay is formed by 4 walls stepped inserted to the hill, on the top of the structure there are 4 niches in a trapezoidal shape, where it might deposited the offerings in honor to the water.

What is left today of Q´enqo archeological complex are carved rocks that couldn´t be destroyed by the Spanish; there is little left of the paths and aqueducts, as well as of the enclosures, the deposits or the liturgical baths, besides the great layer of gold that illuminated the whole place.

Originally named Intikancha or Intiwasi, it was dedicated to Inti, and is located at the old Inca capital of Cusco. Mostly destroyed after the 16th century war with the Spanish conquistadors, much of its stonework forms the foundation of the Santo Domingo church and convent.

Confirmation will be received at time of booking.
Not wheelchair accessible.
Children must be accompanied by an adult.
Comfortable walking shoes are recommended.
Pickup and drop-off in hotels that are not in the downtown area have an extra cost (1- 2 persons: $5 per person; 3 or more persons: $10 per person).
Near public transportation.
Infants must sit on laps.
Most travelers can participate.
This experience requires good weather. If it’s canceled due to poor weather, you’ll be offered a different date or a full refund.
This experience requires a minimum number of travelers. If it’s canceled because the minimum isn’t met, you’ll be offered a different date/experience or a full refund

Cesar, our guide, was excellent. The sites were all well worth the time. No complaints or problems at all. I would gladly take this tour again!

We got to see the major sites in Cusco with a good guide. Unfortunately, I had a bout with altitude sickness and sat on the bus for the last 2 stops.

Be sure to stay at one of the local hotels and eat at a locally owned restaurant to get the full Peruvian experience. Cusco is also very pretty at night!

it was a fun half-day tour to see most of the highlights of the city :